Agricultural R&D has contributed immensely to the successful green revolution in India. However, land and water resources are becoming scarcer with the burgeoning population. To provide adequate food supplies we must improve productivity along with efficiency. Food production increased from 82 mt in 1960-61 to 257 mt in 2011-12. After the first phase of the green revolution, ending around the mid-1980s, several concerns about the content, direction and impact of agricultural R&D were raised by researchers. In particular, the Planning Commission (2008) laments that India's agricultural R&D has focused exclusively on irrigation and chemical intensive production technologies and has neglected environmental and sustainability concerns. The moot question is, how did the R&D establishment - the National Agricultural Research System (NARS) in India make the decisions to focus on these technologies exclusively? Surely, there were development policy directives and policy instruments that the research system was responding to. The clarion call is to explore how agricultural research is shaped by and has in turn shaped agricultural development policies and programs in India. Most importantly, the policy interface between agricultural development and agricultural research is less discussed or analyzed in India.

Expansion of area was the main source of growth in the period of fifties and sixties after that the contribution of increased area under agricultural production has declined overtime and increase in productivity became the main source of growth in agricultural production. Another important facet of progress in agriculture is its success in eradicating of its dependence on imported food grains. Indian agriculture has progressed not only in output and yield terms but the structural changes have also contributed. All these developments in Indian agriculture are contributed by a series of steps initiated by Indian Government. Land reforms, inauguration of Agricultural Price Commission with objective to ensure remunerative prices to producers, new agricultural strategy, investment in research and extension services, provision of credit facilities, and improving rural infrastructure are some of these steps.

There is no doubt that the overall size, quality, and efficiency of investment are always the key drivers of growth in any sector. In case of public investments in agriculture, more than 80 percent is accounted for major and medium irrigation schemes. Even in the case of private investments in agriculture, almost half is accounted for by irrigation (minor, primarily through groundwater, but also now increasingly drip, etc.) So irrigation remains the most dominant component in the overall investment in agriculture. Without proper use of water, it is difficult to get good returns on better high yielding seeds and higher doses of fertilizers.

The trajectory of Indian agriculture and its associated environmental problems has brought about recognition that future agricultural growth and productivity will have to occur simultaneously with environmental sustainability. Investment in agricultural research and development (R&D) are a vital for increasing agricultural productivity through the introduction of improved crops and cropping practices, labour saving technologies, improved quality of food storage, processing and marketing. Studies reveal high rate of return from agricultural R&D investments in the range of 40 to 50 percent making agricultural research as a cost effective way for government to accelerate agricultural growth and development. Agricultural science has always played a vital role in economic progress in both developed and developing economies, welfare improvement has been realized through agricultural research in the form of lesser food prices, enhanced nutrition, growing rural employment, agricultural exports and improved level of foreign exchange, competitiveness of agricultural commodities in the world markets and well-built growth linkages with the rest of the economy. During the green revolution period, adoption of new technologies has helped to improve the income distribution across income classes. The role of agricultural research is elucidated in terms of returns to public investment in agriculture and reduction in real cost of production besides a way forward of achieving 4% growth in agriculture.

Returns to Public Investment in Research 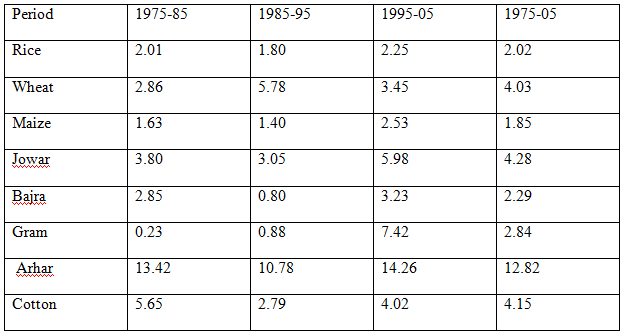 
Research and technology led output growth has helped in decline in real cost of production in the range of 1.0-2.3% per annum during the past three decades in the case of cereals. This has helped in keeping the prices of cereals low for consumers and benefitting the producers also through a decline in real cost of production. A study covering the two decades indicate 42 to 46 % internal rate of return to public investment in agriculture research and education. all these studies prove high pay off from public sector R&D investments.

Reduction in Real cost of Production

The highest gain is in wheat which experienced 2.3 percent annual decline in cost of production; similar decline was in barley, jowar, bajara and rapdeed/mustard; while rice, moong, groundnut and gram showed annual decline of around one percent. 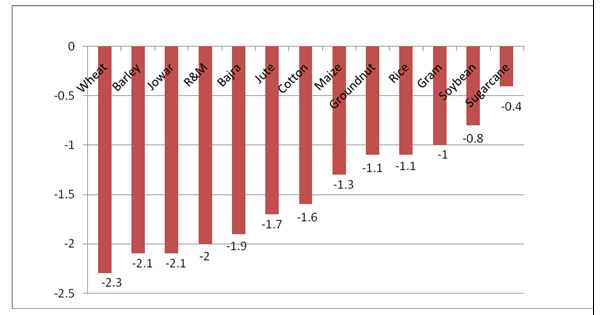 
To attain 4% agricultural growth, as targeted by the Planning Commission, at least one-third of this growth must come through technological innovations and the remaining two-thirds has to be achieved through additional us of agricultural inputs. To meet these targets, investments on agricultural research need to be doubled by 2020 and tripled by 20125 in relation to the investment level of 2005. Investment in a agricultural research has been found to be highly paying proposition. The growth in food production induced by research in India, has not only reduced the import deficiency but also added to export capacity. Agricultural research has also contributed in various ways to change production practices, reduction in drudgery, shift from heavy manual work towards mechanization, increase in resource use efficiency etc. Livelihood of farmers has been affected in several ways. Increase in farm income has contributed to changes in consumption pattern, improvement in dwelling houses, ownership of household durables and comforts, and improvement in living standard and education.

About Author / Additional Info:
The authors are working in the area of IPRs in agriculture and agricultural policy.