The article is about highlighting the concept of vertical farming. In present scenario where human population and urbanization is growing at faster rate, there is a need to adopt such new technologies to meet the growing food demand...
Agriculture on heights: Vertical farming
Authors: POONAM JASROTIA & PRIYANKA CHANDRA

Global human population is increasing rapidly and it is expected to keep growing in coming years. As per the current demographic trends, the human population will reach 8.4 billion by mid-2030, and 9.6 billion by mid-2050. This increase in population will occur predominantly in developing countries. As an effect, urbanization will take place at a faster rate, and nearly 80% of the population will become urban as compared to 50% as of on today. To feed this increased and urbanized population, food production must need to be raised by 70 percent which envisage increase in annual cereal production from 2.1 billion to about 3 billion tonnes and annual meat production from 200 million tonnes to 470 million tones. Relying on the current traditional farming practices to meet this production goal, will require about 100 million hectares of new land to grow enough food to feed the elevated population.


According to a survey by FAO and NASA, at present, over 80% of the available land is in agriculture-use and 15% of that has been declared as wasteland. Besides, poor crop management practices as well as urbanization is further reducing the agricultural land. Another threat of climate change is making the situation even more worse and hampering the agriculture production adversely. If the current scenario of increasing population growth continues like that, there is no doubt that by 2050, it will be hard to meet individual food demands. In this direction to cope with the agricultural land scarcity, Indoor farming or Vertical farming seems to be a potential solution to avoid this impending disaster.

Vertical farming is the practice of producing food in vertically stacked layers or inclined surfaces and/or integrated in other structures to maximize the plant density. It is nothing more complex in concept than a high-tech greenhouse that is stacked on top of itself, transforming it into a multi-storey growing space. Vertical framing is actually based on controlled-environment agriculture (CEA) technology where all the environmental factors can be manipulated as per as conditions required for the proper growth of the plants. These facilities have artificial controls of temperature, light, humidity, gases and fertigation. Some vertical farms have the ability to augment natural sunlight with artificial lighting and metal reflectors, similar to the technology used in greenhouses.

The term "vertical farming" was coined by Gilbert Ellis Bailey in 1915 in his book “Vertical Farming”. He uses the term with different meaning and wrote about farming with a special interest in soil origin, its nutrient content and the view of plant life as "vertical" life forms, specifically relating to root structures underground. Modern usage refers to skyscrapers using some degree of natural light. Concept of current meaning of vertical farming was given by Dickson Despommie. He has written a world-changing innovation book "The Vertical Farm: Feeding the World in the 21st Century". Dickson Despommier's visionary book provides a blueprint for securing the world's food supply and simultaneously solving one of the gravest environmental crises facing us today. In this book, he imagined a world where every town has their own local food source, grown in the safest way possible, where no drop of water or particle of light is wasted, and where a simple elevator ride can transport you to nature's grocery store. 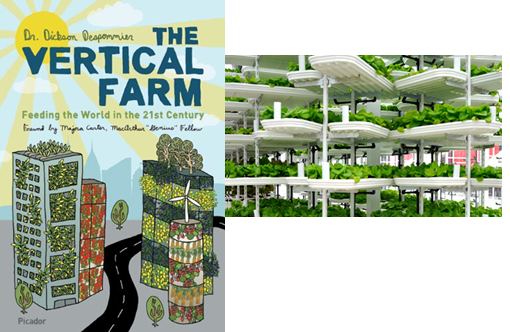 Vertical farms are of different shapes and sizes. They may be simple, two-level or wall-mounted systems, also be as large as warehouses and may be several stories tall. Vertical farms apply one of three soil-free systems for providing nutrients to plants, which are described as under:-


1. Hydroponics. This is the most common growing system used for vertical farming. Hydroponics involves growing plants in nutrient solutions that are free of soil. The plant roots are submerged in the nutrient solution, which is frequently monitored and circulated to ensure that the correct chemical composition required for growth of plants is maintained.

2. Aeroponics. The National Aeronautical and Space Administration (NASA) has developed this innovative indoor growing technique. In the 1990s, NASA was interested in finding efficient ways to grow plants in space and coined the term aeroponics, defined as "growing plants in an air/mist environment with no soil and very little water." An aeroponic system is the most efficient plant-growing system for vertical farming which is using up to 90% less water than even the hydroponic systems which is consider to be more efficient than aeroponic system. Plants grown in these aeroponic systems results in healthier and potentially more nutritious as it has been seen that they absorbs more minerals and vitamins.

3. Aquaponics. An aquaponic system is one step advance of hydroponic system which combines plants and fish in the same ecosystem. Fishes are grown in indoor ponds, producing nutrient-rich waste that is used as a feed source for the plants in vertical farming. The plants, in turn, filter and purify the wastewater, which is recycled to the fish ponds. Although aquaponics is used in smaller-scale vertical farming systems, most commercial vertical farm systems focus on producing only a few fast-growing vegetable crops and don’t include an aquaponics component. This simplifies the economics and production issues and maximizes efficiency. 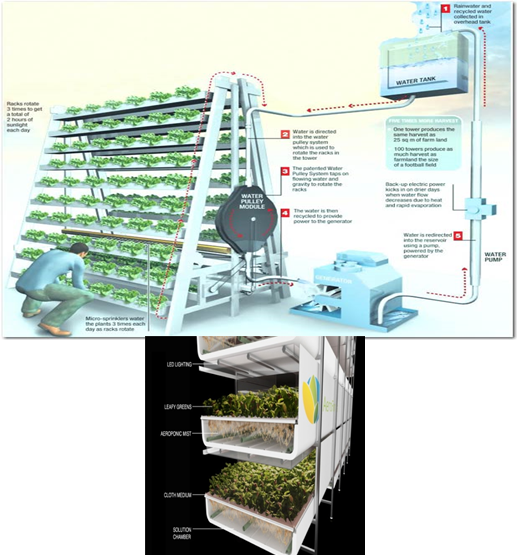 Aerofarms is a company which is operating indoor vertical farms and growing leafy greens and herbs without sunlight, soil and pesticides. They are providing perfect amount of moisture and nutrients misted directly onto their roots in a completely controlled environment. They have a patented technology of indoor vertical farming and use a new level of precision and productivity with minimal environmental impact and virtually zero risk.

They are using following methods for vertical farming:

Aeroponics: Aerofarms are using aeroponics to mist the roots of plants with nutrients, water, and oxygen. They have a closed loop form of aeroponic system which is using 95% less water than field farming, 40% less than other hydroponics system and zero amount of pesticides.

Light: LED lights are used to create a specific light for each plant, providing the plants exact spectrum, intensity, and frequency they are requiring for photosynthesis in the most energy-efficient way possible. This specific lighting controls size, shape, texture, color, flavor, and nutrition in plants with high precision and also it leads to increased productivity.

Nutrition: Constantly monitoring is done in vertical farming for all the macro- and micronutrients required for plants. With this technology, by the exact same seed from the field and it is grown in half of the time in comparison to traditional field farmer. Vertical farming is leading to 75 times more productivity per square foot than a commercial field farm.
Substrate: They have developed a patented, reusable cloth medium for seeding, germinating, growing, and harvesting. This growing cloth medium is made of post-consumer, recycled plastic, each taking 24 water bottles out of the waste stream. This cloth can be fully sterilized after harvest and can be reseeded with no risk of contamination. This cloth act as a barrier between the mist and the plants, due to which clean, dry and ready to eat product can be harvested.
Pest Management: This technology has been developed to mitigate pest proliferation with no requirement of pesticides. This system is totally controlled so normal life cycle of common indoor pests never get started and due to this pest-resistant design, pesticides, herbicides and fungicides becomes unnecessary.

• As agricultural lands are shrinking and population is increasing exponentially, a large amount of land will be required for agriculture in future. Vertical farms, if designed properly, may eliminate the need to create additional farmland.
• As the crops would be sold in the same infrastructures in which they are grown, there will be no need for transportation between production and sale, resulting in less spoilage, infestation, and energy required in conventional farming. Research has shown that 30% of harvested crops are wasted due to spoilage and infestation.
• Crops grown in traditional outdoor farming suffer from undesirable temperatures or rainfall amounts, monsoons, hailstorms, tornadoes, flooding, wildfires, and severe droughts. The protection of crops from weather is increasingly important as global climate change occurs. Because vertical plant farming provides a controlled environment, the productivity of vertical farms would be independent of weather and protected from extreme weather events.
• Vertical farming would reduce the need for new farmland due to overpopulation, thus saving many natural resources,
• Traditional farming is a hazardous occupation with health risks of human laborers. Such risks include: exposure to toxic chemicals commonly used as pesticides and fungicides. However in vertical farming due to controlled environment there is no need for pesticides.
• Vertical farming allows continued growth and sustainability which can give food security to everyone.
• Vertical farms can use methane digesters to generate a small portion of its own electrical needs. Methane digesters could be built on site to transform the organic waste generated at the farm into biogas which is generally composed of 65% methane along with other gases. This biogas could then be burned to generate electricity for the greenhouse.

• Exact amount of profitability of vertical farming is not clear as start-up costs and operation costs are very high
• To develop controlled environment, heating and cooling for the system will be very expensive
• Sunlight will not be sufficient hence supplemental light would be required and the cost of powering artificial lights will make indoor farming prohibitively expensive
• Hydroponics greenhouses regularly change the water which means that there is a large quantity of water containing fertilizers and pesticides needs to dispose of. This can be cause health hazards.
• This system can create more greenhouse gases
• High amount of energy generation is required which can lead to different types of pollution.

Conclusion:
Considering the benefits and challenges of vertical farming, we should still work towards the creation of cutting-edged technologies by using our creative intellects for sustaining an intact ecosystem, and for getting the productivity goal achieved. Primary productivity is an essential feature of all ecosystems, we should start with this activity as the basis for creating the eco-city with all the new varieties of vertical farms and rooftop greenhouses going up inside the built environment. As the climate continues to challenge our quality of life on Planet Earth, generating just ten percent of our farm production using such technologies might be enough to slow down our runaway climate regime and give us some much needed time to figure out ways of dealing with climate threats.


About Author / Additional Info:
I am working as Senior Scientist in ICAR-Indian Institute of Wheat and Barley Research. My specialization is in Agricultural Entomology. The Co-author of the article is Priyanka Chandra, and she is agricultural microbiologist in the same institute.