Allium chinense is very potential plant of Amaryllidaceae family, having varied uses as food and medicinal properties. It is found mainly in the tropical and sub-tropical areas of Japan, China and many other parts of eastern Asia. It is popularly cultivated as a vegetable for its bulbs and leaves. It is cultivated in some parts of North-Eastern regions of India. Hence there i..
Allium Chinense: Lesser Known Potential Plant
Authors: T. Chamroy
Correspondence address: tchamroy@gmail.com

Allium chinense is native to China. It is found mainly in the tropical and sub-tropical areas of Japan, China and many other parts of eastern Asia. In Asia, it is popularly cultivated as a vegetable for its bulbs and leaves. It is known to be cultivated in some parts of North-Eastern regions of India as well. 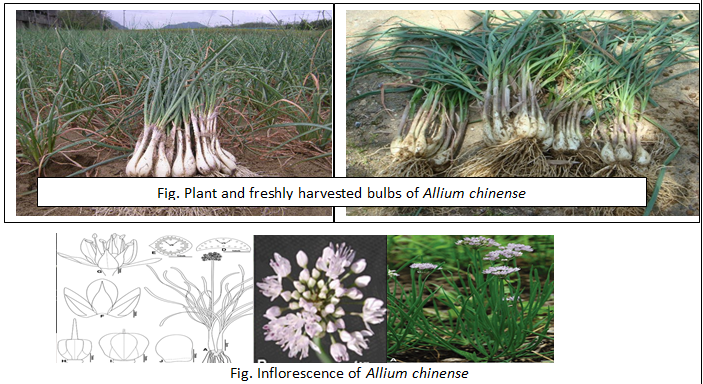 Growth and development: After planting, the growing point of a bulb divides to form a cluster of sprouting shoots and the number and weight of roots and leaves increase rapidly. After the shoots have reached a certain size, bulbs are formed, and the leaves wither and die. At intermediate latitudes (30-40 °N and S), the flower stalk develops inside the bulb during the summer period, and in late summer the scape grows out of the old bulb whose leaves, by then, have already withered. The scape appears to stand outside the leaves as those are formed on new lateral bulbs. Since the flowers are female sterile, no seeds are produced. In the tropics, the full-grown crop remains small and development phases are much less pronounced than at intermediate latitudes; flowering is very rare in the tropics.

The bulb resembles a small onion, but the bulb is formed by the thickened leaf-sheaths only and no bladeless scales are formed like those in the onion; consequently, no thin neck occurs.

Bulbs are consumed raw or cooked. It has an excellent crisp texture with a strong onion flavour. The bulbs are often steeped in brine and subsequently processed into sweet or sour pickles and served as a side dish in Japan and Vietnam. In North-East regions of India the bulbs crushed or mixed with chilli and some dried meats served as favorite part of a meal. The Leaves, flowers and young seed pods are consumed raw or cooked. They are used raw as a garnish on salads.

The whole plant is astringent, carminative and expectorant. It is used the treatment of stuffiness sensation and pain in chest, angina pectoris, pleurisy, bronchitis, diarrhea and in cases of dysentery.

Allium chinense contains sulphur compounds and when added to the diet on a regular basis will help reduce blood cholesterol levels, acts as tonic to the digestive system and also tonify the circulatory system.

Soil and climate: The climatic requirement of Allium chinense is not well known. However, Long days (16 hours) promote bulb and flower formation. The plant requires a sunny position for its growth and cannot grow in the shade. However it requires a cool climate as it often die-back in hot and dry weather during mid-summer. The optimal temperature range for bulb formation is 15-25 °C. Photosynthesis decreases when the temperature increases from 15 °C to 35 °C, whereas transpiration increases. It is resistant to drought and can be grown without irrigation, but watering in dry months considerably increases yield. It thrives well in a light well-drained sandy - loamy soil. It prefers a moist soil condition, pH ranging from acid, neutral and basic.

Propagation and planting: A. chinense is always propagated vegetatively by bulbs which are planted after a storage period of 1-2 months to overcome dormancy. Plants are usually spaced 10-15 cm × 10-15 cm.

In North-Eastern regions of India the bulbs of previous season are generally used as propagating material. Planting is done directly in the field, commencing from February till April when the soil is moist and weather is cool.

Harvesting and yield: A. chinense can be harvested from 60-90 days after planting. Harvesting is by hand, and bulbs are sold fresh in small bundles. Yields of 15-20 t/ha have been reported in Japan, but are much lower in the tropics.

Problems: Chlorosis is one of the major physiological disorder of A. chinense caused by zinc deficiency; the symptoms are yellowish stunted plants with thickened leaves and distorted new leaves. Foliar applications of zinc sulphate can reduce the damage. The only pest reported is the Rhizoglyphus mite.

Genetic resources and breeding: Farmers' selections seem to be the only genetic resources available for further improvement. Collection of wild types has not yet been done. Breeding does not seem to be very urgent. An array of cultivars is available in China, Japan and parts of north-east regions in India, but they do not set seed, since most cultivars are sterile tetraploids. Finding seed-producing selections could signal a breakthrough, as in garlic.