Amaranth (Amaranthus L.) is a short duration, low input underexploited multipurpose crop used as vegetable, grain crop, medicinal, forage and as an ornamental plant.It is a pseudocereal as its tiny grains rich in proteins and starch are used like cereals, although it does not come under grass family Gramineae (Poaceae) to which cereals like wheat, rice and maize belong.Consider..
Amaranth (Amaranthus L.) - A potential multipurpose underexploited crop
Author: Sheikh M. Sultan
ICAR-NBPGR Regional Station Srinagar (Jammu and Kashmir) - 190007
e-mail: sheikhmsultan@gmail.com


Since the dawn of agriculture, farmers throughout the world have developed roughly 10,000 plant species for food and fodder production.However, nowadays only 150 crops feed most of the world’s population, and only 30 crops, the most outstanding of which are rice, wheat and maize provide 95% of the calories needed in the human diet (Jaramillo and Baena, 2002).Agricultural simplification has favored some crops instead of others on the basis of their comparative advantages for growing in a wider range of habitats, their simple cultivation requirements, easier processing and storability, nutritional properties, taste etc.This has lead to considerable genetic erosion in the agricultural fields, as a result fewer and fewer species from a variety of plants are used today for human nutrition.It is estimated that about three quarters of the genetic diversity found in agricultural crops have been lost over the past century, and this genetic erosion continues unabated.This is not a healthy sign for world agriculture especially under the prevailing conditions of climate change.Besides, feeding growing world population from the current 7.2 billion to expected 9.6 billion by the year 2050 poses a formidable challenge.Crop genetic diversity increases options and provides insurance against future adverse conditions such as extreme and variable environments and also helps in combating new pests and diseases, thus ensuring food security.Rice, wheat and maize belonging to the grass family Gramineae (Poaceae) are the three dominating cereal crops constituting staple food of majority of the world population today.Humans need to add to their diet those crops of high yield and quality that can adapt to environmental conditions and resist pests and diseases.Three such plants have gained importance as grains from some time now.These are amaranth ( Amaranthus sp.), quinoa (Chenopodium quinoa) and buckwheat (Fagopyrum esculentum and Fagopyrum tataricum ).Botanically these are dicots while cereals are monocots.However, like cereals they produce starch rich seeds having advantageous nutritional properties and are very well able to increase the range of starch-rich plants for human nutrition.Thus, although these are not cereals but can be used like cereals.Hence, these are called as pseudocereals.In recent years, pseudocereals and alternative cereals have been attracting increased interest, both from the agricultural point of view and from aspects regarding processing (Berghofer and Schoenlechner, 2002).

Amaranth (Amaranthus L.) belonging to the family Amaranthaceae and commonly called as ‘pigweed’ is a small-seeded ancient crop, cultivated for some 8 thousand years with promising economic and nutritional value and has attracted increasing interest over recent decades.It is a cosmopolitan genus with approximately 70 species of annual or short-lived perennial plants with wide morphological diversity among and within certain species.Some 50 species are native to Americas and it is thought that Amaranth probably originated in America.The major centers of distribution are tropical America, India, China, Nepal, Italy, Greece, Africa and Australia.For human consumption there are cultivated grain amaranths -Amaranthus caudatus, Amaranthus cruentus andAmaranthus hypochondriacus and vegetable amaranths – mainlyAmaranthus dubius, Amaranthus tricolor and Amaranthus cruentus.Grain amaranths are cultivated from the temperate to tropical zone and the vegetable amaranths mainly in the South Africa and South Asia (Jarošova et al., 1997).However it remains a largely underexploited crop and its cultivation is still low, and is not even listed in the FAO statistics on production data.An appreciable cultivation of amaranth for human nutrition does, however take place in Latin American countries, USA, Europe and China.

Amaranth is a broad leaved multi-purpose plant, used as vegetable, grain crop, medicinal, forage and as an ornamental plant growing vigorously and ranging in height from 40 inches to three meters; occurring at an altitude of 110-3000 meters above sea level.Some species of amaranths are the world´s most stubborn weeds.The plants bear inflorescences which are catkin-like cymes of densely packed flowers ranging in color from purple and red to green or gold and maturing into large seed-heads with countless tiny grain-like seeds which are commonly dark-brown to blackish, or whitish-yellowish, sometimes with reddish nuances in the species cultivated as cereals.The seeds possessing a robust nutty flavor have been used as a staple by many ancient civilizations around the word.It is self-pollinated, but wide variation in genotypes exist due to varying amounts of outcrossing and frequent interspecific and inter-varietal hybridization (Ray and Roy, 2009).Their genetic variability has afforded them exceptional adaptability to a wide range of environmental conditions, although being C4 plants they do require high temperatures (35 ºC) and strong light ((Kulakow and Hauptli, 1994)).Amaranth can tolerate extreme climates and is thus an interesting crop from the cultivation point of view for its heat and drought resistance and very low susceptibility to diseases and pests (Barba de la Rosa, 2009).Amaranth genotypes have been classified into following types:

‘Anderer Type’ - early-maturing, rather short with a compact inflorescence.

‘Mittlerer Type’ - medium in maturity and tall with little tendency to branch.

Amaranth in Hindi is called ‘Ramdhana’ or ‘Rajgeera’ meaning God’s grain and King’s grain respectively.The names indicate the tremendous importance and immense value of this grain. Grain amaranth has been gaining worldwide acceptance as a crop owing to its gluten free nutritional value which is better as compared to wheat:

Chemical composition of the grains varies within the Amaranthus species.Usually, contents fall within the following ranges: crude protein 12–19%, fat 5–8%, starch 62–69%, total sugars 2–3%, fiber 4–5% and ash 3–4% (Williams and Brenner 1995).The flour ground from these seeds mixes well with cereal flour and increases its protein content.True digestibility of the raw complete amaranth protein is in the range 74 - 80 %.However, the digestibility and the protein efficiency ratio are significantly improved if the grain is heat processed.Heat treatment results in the denaturation of trypsin inhibitors and other antinutritional substances.Leaves of Amaranthus are rich in vitamins, protein and minerals hence used as a nutritious vegetable.Vegetable amaranth is consumed almost all over India especially in the states of Kerala, Tamil Nadu, Karnataka, Andhra Pradesh, Telangana and Maharashtra.It is said to help in lowering blood cholesterol level, reducing risk of calcium deficiency, preventing skin related infections, aiding in digestion and believed to be good in diabetes.Amaranth grain provides an ideal amino acid composition for human nutrition.In particular, the content of lysine is high.Lysine content in amaranth whole meal flour is approximately three times higher than in wheat flour.Arginine and histidine contents are also remarkably high making it interesting for child nutrition.Mineral concentration is higher than in other cereals.In particular, amaranth grain is rich in calcium, magnesium, iron, potassium and zinc (Berghofer and Schoenlechner, 2002).Besides, these contain remarkable amounts of antioxidant phytochemicals including phenols, flavonoids, anthocyanins, fat-soluble vitamins, fatty acids particularly unsaturated ones, squalene and other compounds (non-enzymatic antioxidants) which exert a protective mechanism against the oxidative stress and damage of tissues.Being gluten free grains are beneficial in irritable bowel syndrome and other coeliac diseases.

Amaranth is a crop of moderate importance in Himalayas, almost a forgotten crop now.Earlier farmers used to cultivate it on small scale especially for house hold use.The minute grains of amaranth were parched, ground and taken with milk or water.Roasted grains were eaten by people especially during fasting days.In the state of Jammu and Kashmir, amaranth (local ‘‘Ganhar’’ or “Seoul”) was earlier frequently sown in rows in cotton fields and on the borders of maize plots.I have myself seen a row of amaranth plants being raised on the borders of maize fields facing open spaces in some high altitude areas of Kashmir valley (Fig. 1D).The role of amaranth as a companion plant serving as trap for many insect pests is now well established.The minute grains are used as poultry feed especially for newly hatched chicks in some areas. 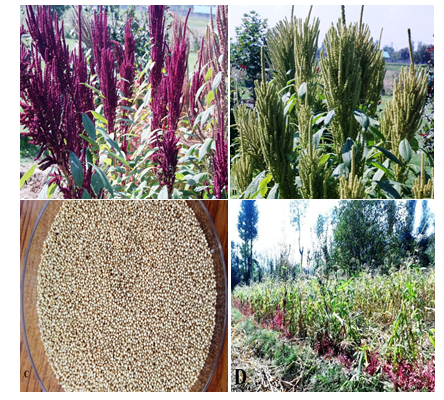 colors (A & B), seeds (C) and plants raised on the border of maize

field in Budgam area of Kashmir possibly as a trap crop (D).

While characterizing some genotypes of amaranth ( Amaranthus hypochondriacus) collected from different areas of Jammu and Kashmir (Fig. 1A & B) we have found that the crop matured in 125-136 days.Plant height ranged from 1.2 - 2.3 meters, inflorescence length from 46.6 - 61.3 centimeters, seed yield/plant from 18.34 - 44.1 grams and 1000-seed weight from 0.636 - 0.727 grams.1000-seed weight is the most important physical quality trait of amaranth seed and is a partial indicator of size.Amaranth is a short duration, low input crop which has a potential to contribute to: (1) agricultural diversification, (2) greater use of marginal lands and changing environments, (3) greater food security, (4) a more balanced diet and (5) diversified sources of income to the farmers.Considering its agronomic and nutritional importance, amaranth has tremendous potential to broaden the food base and is thus considered to be a crop for future.