Application of Lipopeptides in Agriculture

Enormous use of harsh surfactants in agricultural soil and agrochemical industries so use of green compounds to achieve the sustainable agriculture is the present necessity. Biosurfactants which are reported to be produced by bacteria, yeasts, and fungi (Microorganisms) can serve as green surfactants. Biosurfactants are surface-active biomolecules produced by microorganisms. Li..
Application of Lipopeptides in Agriculture
Authors: Ankit S. Patel1 and Jalpesh S. Patel2
1 Dept. of Agril. Microbiology, B.A. College of Agriculture, Anand Agricultural University
2 Dept. of Biochemistry, B.A. College of Agriculture, Anand Agricultural University

Biosurfactants are surface-active amphibolic biomolecules produced by microorganisms. They vary in their molecular size, structure, chemical properties and composition. Biosurfactants possess antifungal, antibacterial and antiviral quantities and also have anti-adhesive action against many pathogenic microorganisms. Types of Biosurfactants: Lipopeptides and lipoprotein, glycolipids, fatty acids, phospholipids, neutral lipids, polymeric biosurfactants, particulate biosurfactants. They are non-toxic or low in toxicity, biodegradable, wastes can be used as raw materials (Walia and Cameotra, 2015).

Lipopeptides are types of biosurfactants which have a number of biological activities, including antibiotic, antitumor, immune-modulating and immune-suppressive activities. They are linear or cyclic peptides acylated by a lipid, usually a fatty acid side chain. More than 20 different peptides linked to various fatty acid chains were isolated during 1950s and 1960s from Bacillus sp. Main examples of lipopeptides: Surfactin, Fengycins and Iturins.

Surfactin is a cyclic lipoheptapeptide. It has the ability to reduce surface tension of water from 72 to 27 mN/m at a concentration as low as 0.005 %. The surfactins are powerful biosurfactants, which show antibacterial activity but no marked fungitoxicity. Surfactin also shows potent antiviral, antimicoplasma, antitumoral anticoagulant activities as well as inhibitors of enzymes. 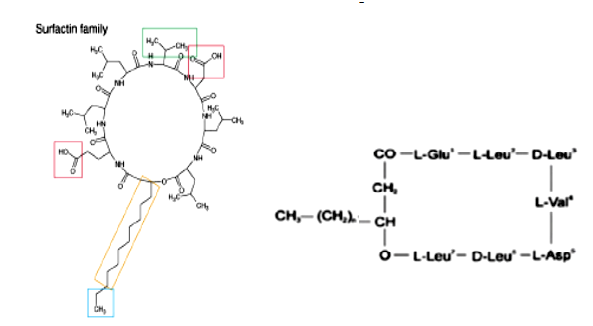 Iturin is also a group of cyclic lipopeptides. Iturin A, C, D and E, bacillomycin D, F and L, bacillopeptin and mycosubtilin belong to the iturin group. Special class of pore-forming lipopeptide and are well recognized by their antifungal activity against a wide variety of pathogenic yeasts and fungi. Iturin can increase the membrane cell permeability by the formation of ion-conducting pores. The antifungal activity is related to the interaction of the iturin lipopeptides with the cytoplasmic membrane of target cells and the K+ permeability of which is greatly increased.

Fengycin are lipopeptides with 10 amino acids and a lipid attached to the N terminal end of the molecule. They are different from iturin and surfactin by the presence of unusual amino acids such as ornithine and allo-threonine. Fengycin family is classified into Fengycin A and B and Plipastatin A and B on the basis of peptide moiety. Like Iturin compounds, Fengycin display strong antifungal activity and inhibit the growth of a wide range of plant pathogens especially filamentous fungi.

Lipopeptides can be produced by the non-ribosomal biosynthetic pathway, an assembly line that parallels protein synthesis but it is ribosomal-independent and elaborated by a complex mechanism involving multifunctional synthetases. In the biosynthesis of surfactins, combination of enzyme-catalyzed steps are carried out by three modular non-ribosomal peptide synthetases (NRPSs), the surfactin synthetases A, B and C. The enzymatic steps involve aminoacyl-adenylation, thioesterification, condensation, epimerization and thioesterase activities, depending on the specific enzyme module.

Ø As Antimicrobial agent (Antibacterial agent, Antifungal agent): Plaza et al., (2013) have studied antifungal and antibacterial properties of surfactin isolated from Bacillus subtilis growing on molasses. They found that surfactin has ability mycelia growth ofBotrytis cinerea A 258 (~50% of inhibition), Sclerotinia sclerotiorum K 2291 (~50% of inhibition), Colletotrichum gloeosporioides A 259 (~40% of inhibition), Phoma complanata A 233 (~38% of inhibition). Das et al., (2007) have observed antimicrobial potential of a lipopeptide biosurfactants derived from a marine Bacillus circulans. They reported that biosurfactant had a potent antimicrobial activity against Gram-positive and Gram-negative pathogenic and semi-pathogenic microbial strains including MDR strains.

Ø As Biocontrol agent: Yanez-Mendizabal et al., (2012) have observed Biological control of peach brown rot ( Monilinia spp.) by B. subtilis CPA-8 is based on production of fengycin-like lipopeptides. They have confirmed by TLC-bioautography that presence of fengycin, iturin and surfactin having strong antifungal activity Monilinia laxa and Monilinia fructicola. Tran et al., (2007) have studied the role of the cyclic lipopeptide massetolide A in biological control of Phytophthora infestans and in colonization of tomato plants by Pseudomonas fluorescens. They found that massetolide A was an important component of the activity of P. fluorescens SS101, since the mass A-mutant was significantly less effective in biocontrol, and purified massetolide A provided significant control of P. infestans, both locally and systemically via induced resistance.

With the changing scenario over the last decade, lipopeptides have proved to be ecofriendly, biodegradable, less toxic and more biocompatible as compared to chemical surfactants. Natural product such as Lipopeptides is used for biological control, antimicrobial and anti-adhesive activities and therefore helps to reduce synthetic chemical compounds. Lipopeptide produced by Bacillus circulans had a potent antimicrobial activity against Gm+ve and Gm-ve pathogenic and semipathogenic microbial strains including MDR strains. B. cereus NK1 was successfully found to be heavy metal resistant and a potent producer of biosurfactants able to emulsify a variety of hydrocarbons and showed substantial antimicrobial activity and biofilm inhibition against various pathogenic infections. Surfactin used for nanoparticle synthesis as a non-toxic and biodegradable stabilizing agent.


About Author / Additional Info:
I am a Ph.D. scholar in Agril. Microbiology with Inspire fellowship