Are GMO a Panacea for Ensuring Food Security?

The introduction of Genetically Modified (GM) crops have kick started a huge controversy across the world. Genetic Engineering as a technology and its products, Genetically Engineered/modified organisms, are yet to answer many a questions on their impacts to environment and human health. The unpredictability and irreversibility of Genetic Engineering and the uncontrollability o..
Are GMO a Panacea for ensuring food security?
Authors: Sourav Kumar Das
Msc research scholar, Division of molecular biology and biotechnology
ICAR-Indian Agricultural Research Institute
Email id-souravkumardas001@gmail.com

The introduction of Genetically Modified (GM) crops have kick started a huge controversy across the world. Genetic Engineering as a technology and its products, Genetically Engineered/modified organisms, are yet to answer many a questions on their impacts to environment and human health. The unpredictability and irreversibility of Genetic Engineering and the uncontrollability of GE crops in the environment coupled with studies pointing at the potential risk to human health and environment has resulted in a controversy across the world around the need for introducing such potentially risky organisms. Added to this is also the corporate sector control of the seeds, the most important input in agriculture, through this technology. Due to this growing scientific evidence on the lack of safety of GM crops and reality of corporate monopoly in seeds, majority of countries have shunned this so-called gene revolution path for agricultural development.

So far, most of the commercial applications involve herbicide tolerance and insect resistance, but other GM traits are in the research pipeline and are likely to be commercialized in the short-term to medium-term future. The rapid global spread of GM crops has been accompanied by an intense public debate. Supporters see great potential in the technology to raise agricultural productivity and reduce seasonal variations in food supply due to biotic and abiotic stresses. Increasing demand for agricultural products, natural resource scarcities and additional challenges posed by climate change are the main threat which requires increases in productivity for achieving long-term food security. Aside from health and safety concerns, critics worry that the widespread use of GM crops will put India’s food supply largely in the hands of a few giant corporations that make the seeds. There is also the possibility of genetic contamination if the Bt genes cross pollinate with other varieties.

Bt cotton, which is resistant to different lepidopteran, coleopteran and dipteran insect pests, was among the first GM crops to be commercialized in the mid-1990s. Most of these areas are cultivated with Monsanto’s Bollgard I technology, involving the Cry1Ac Bt gene, but Bollgard II with stacked Cry1Ac and Cry2Ab genes and a broader spectrum of target pests – has also been released in several countries. In addition to the Monsanto technology, in India – the public sector has developed and commercialized Bt cotton varieties having higher production and productivity. 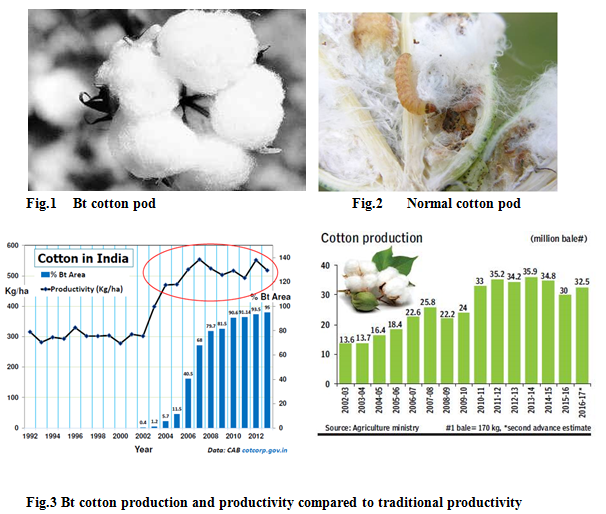 Golden Rice (GR), which has been genetically modified to produce b-carotene in the grain, has been proposed as a possible intervention to control vitamin A deficiency (VAD). VAD is a considerable public health problem in many developing countries: it affects 140 million pre-school children and 7 million pregnant women worldwide. Of these, up to 3 million children die every year. Apart from increasing child mortality, VAD can lead to visual problems, including blindness, and also increases the incidence of infectious diseases. The deficiency is most widespread in poverty households, where diets are dominated by staple foods with relatively low nutritional value. Food supplementation and industrial fortification programs can be effective in reducing VAD, but they often do not reach the target populations in rural areas.

India is one of the target countries for Golden Rice, because mean levels of rice consumption are relatively high, and VAD is widespread. Of the 140 million pre-school children suffering from VAD worldwide, more than 35 million live in India. Adverse health outcomes of VAD include increased mortality, night blindness, corneal scarring, blindness and measles among children, as well as night blindness among pregnant and lactating women.

However, from an economic perspective it needs to be asked at what cost a certain effect is achieved. The major costs of Golden Rice are the investments in research as well as in developing, testing and disseminating the GM technology.GM crops cultivation are cost effective than traditional crop cultivation.

Bt brinjal was developed by Maharashtra Hybrid Seeds Co (Mahyco) under license from Monsanto, and estimates show economic benefits from higher yields could top $400 million a year. Bangladesh is successfully growing Bt brinjal without any hesitation and it successfully enhance the farmers economy. 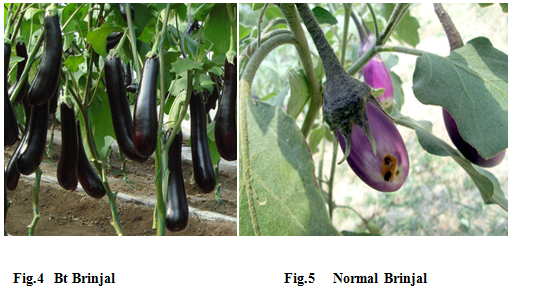 GMOs carry risks of ‘unintended’ effects and toxicity, which confront us with a double problem: scientists don’t know what to look for, and health impacts become apparent only in the long term, such as cancer. California reaffirmed last month, despite GM behemoth Monsanto’s best efforts, that its glyphosate, considered the safest herbicide, will be included in a list of chemicals labelled as “cancer-causing”.

There is serious concern that Monsanto may have known for 30 years that glyphosate is an endocrine (hormone) disruptor; no regulatory agency anywhere regulates for endocrine disruption despite overwhelming evidence from Argentina of horrendous birth defects because of glyphosate used in herbicide-tolerant (HT) soybeans. In this context, Bayer’s glufosinate, the herbicide linked with Indian HT mustard, is an acknowledged neurotoxin banned in the EU. The Supreme Court-appointed technical expert committee recommended a ban on any HT crop in India for this among several other reasons.

The myths that have sustained the propaganda of a safe and highly productive GM crop technology for two decades - that it “will feed the world” - are fast dissolving. The current stable of GMOs comprises just two products, Bt (e.g. Bt cotton) and HT crops (HT mustard), and they account for nearly 99% of GMOs planted worldwide. Both, on empirical evidence (including India’s Bt cotton), are proven unsustainable technologies. There are promises of GMOs with traits for disease, drought etc., but these are complex, multi-gene traits and remain futuristic. What is abundantly clear is that traditional breeding outperforms GMOs hands down.

“We could do wonders to our food supply with GMOs,” Sir Roberts said, before adding that the campaign against genetically engineered food “makes no sense”. If you don’t want to eat GMOs, then don’t. But, don’t pretend they are dangerous. They are not. They are probably safer than traditional foods, he said. He also expressed dismay over the delay in the production of Golden Rice, a genetically engineered food crop with high amounts of vitamin A. The crop, Sir Roberts felt, could help address vitamin A deficiencies, which is a major cause for childhood blindness in developing country. He claimed that more than 15 million children had died or suffered globally due to vitamin A deficiency since 2002. “How many must die before we consider this a crime against humanity that should be prosecuted?, Sir Roberts asked. Further, Sir Roberts pointed out that food is not a problem in developed countries. “But, let us not forget the consequences of our actions for the developing countries,” he said before emphasizing the need for more “science in politics and less politics in science.” Sir Roberts also sought to make it clear that he does not endorse the capitalistic and monopolistic approach adopted by large companies like Monsanto with regard to GMOs.

Knowingly or unknowingly, we Indians are consuming the GM products which are imported from the countries where GM crops are commercialized. Another strong point regarding GM crop commercialization is that, American countries are consuming GM corps since 2 decades without any health and environmental issue.

Protests against them a crime against humanity, says Richard J. Roberts

Scientists and others, who are in favour of genetically-modified (GM) food crops, have got support from an unexpected quarter. Richard J. Roberts, who won the Nobel Prize for physiology or medicine in 1993, made a forceful case for promoting research on GM food crops and their use for public consumption, saying they were needed to at least take care of vitamin and other deficiencies in the developing world.