Are we Ready for the Great Gene Revolution?

Indian agriculture going through a crisis, ever shrinking the cultivating area and rapidly increasing population. Gene revolution by genetic modifications of the crops using biotechnological tools promises a great help in this agrarian crisis..
Are we ready for the great gene revolution?
Author: Abhijith K P

Concerns over quantity of production
India has gone through number of famines yet we survived at the cost of million lives. As Each day passing, earth becoming more non supportive place for life. Blame on pollutions, and resulting climate change and now it taking its toll on agriculture; where the uncertain climatic conditions and soil degradation make crops harder to sustain and give sufficient quantity of produce. In India, we need to double the agriculture production by 2050 in order to feed expected population of 1.8 billion people. In an overpopulated country like India where cultivable land is rapidly shrinking, we should look forward to boost productivity at its best.

It is estimated that 15-20% of the total crop loss is due to the infestation of insect, diseases and weeds and most of the time controlling them at safer level determines the profitable agriculture. Unfortunately this led to over usage of agrochemicals, which in turn accelerated the ever increasing pollution rates as well as soil degradation. In addition, they are causing various health issues. It should mention here that recently 20 farmers in Maharashtra, lost their lives while applying these poisonous chemicals. At nutrition point of view the major challenge our country facing is micronutrient malnutrition, our staple food crops scores very insufficient amount micro nutrients to meet body needs. This ‘hidden hunger’ affects more than half of our population. Micro nutrient supplementation cannot be considered as an ultimate alternative in a country where more than 270 million people can’t even afford a nutritious meal at least once in a day.

There are other issues too which has to be taken care very urgently in this scenario. The question is how we do resolve all these issues effectively? Yes, this is the right time to think about feasible alternatives where the conventional breeding strategies fail to furnish their role in full potential.

How gene revolution can make our world a better place.

in 1960s green revolution has helped our country from falling in to a greater famine; but in this situation strategies we followed in decades back are surely not going to help anymore; instead one should realize that we should adopt innovative technologies which capable of keeping up the scale of crop production. Genetic modification of the crops through biotechnological tools in this scenario seems to be a promising option to resolve at least some of the major challenges which are urgently to be taken care. Gene revolution refers to the manipulation of crop genetic architecture through biotechnological applications and thereby increasing the crop production. Manipulation often done by transferring the gene of our interest from one organism to a recipient organism and incorporating the foreign gene to recipient’s DNA. In a simple way gene revolution makes crops stronger and healthy, so that they can withstand against the adversities by their own mechanisms, and ultimately going to serve us best quality food in good amount.

Globally GM crops occupies around 185 million hectares area spanning over 26 countries. USA leading as top producer. This technology has rewritten fates of many crops where farmers troubled with abiotic and biotic stresses and improved the economic status. 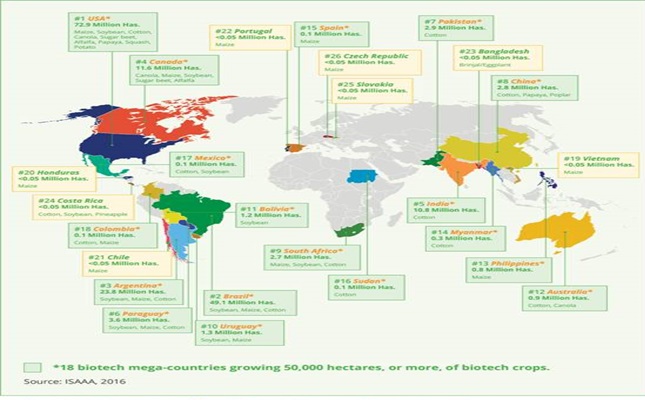 Hawaiian papaya is delicious, and it is the second most cultivated fruit in this island. But all the joy started to fade when the papaya ring spot virus infested the crop in mid-1900. Papaya cultivation started to cease by then. After a long time efforts and deep research authorities have developed two resistant varieties Rainbow and SunUp. These varities are derived from a mechanism called pathogen derived resistance (PDR). This technique involve incorporating a gene from pathogen itself to the crop and impart resistance against the pathogen. As a result Hawaiian papaya industry bloomed again.

This a good example of public-private partnership to develop GM crops. This project started in 2008 in collaboration of Monsanto and other public sector organizations including CIMMYT, African agricultural technology foundation etc. this project aims at incorporating various traits such as drought tolerance, insect resistance etc to perform under Africa’s drought prone ecosystem by combining transgenic technology with various breeding approaches.

Bt cotton is the only GM crop cultivating in India. This varieties of cotton has incorporated with cry genes which can produces endotoxin very specific to insect gut, and this way the pest will be controlled without spilling much pesticides. Since the arrival of Bt cotton in 2002, it became a favorite choice of farmers. Guess what, cotton production shown a tremendous increase from 14 million bales in 2000 to 35 million bales in 2016. Now India is the world’s largest cotton producer and second largest exporter. This technology significantly reduced maintenance cost of the crop.

Attempts to release Bt brinjal developed by Mahyco got denied in 2010 though it cleared for commercialization in 2009 by GEAC. Bt brinjal found to be effective against the major pest, fruit and shoot borer. Later these varieties were released for commercial cultivation in Bangladesh.

DMH11, a transgenic mustard hybrid developed by Delhi University also going through similar scrutinization and became a topic hot debates in the country. Transgenic technology could ease the hybridization procedure and easy to release hybrids in this variety but its commercialization is still under uncertainty due to political reasons.

GM crops have criticized mostly based on non- scientific reason in India. Corporate nature of GM crops has led wide speculation towards monopoly and foreign invasion in Indian agriculture. Several theories rolling over in public media regarding health issues posed by GMOs based on half cooked scientific evidences. Many believe transgenics are against the nature since it forcibly combine of two different organism’s genetic material and questions its existence from religious point of view.

India’s exponentially increasing population and ever shrinking cultivatable land demands the increase in productivity at its best , without comprimising the quality of product. Transgenic technology in this regard can be considered to be a boon to agriculture, where genetic architecture of the crop tailored for our desired traits. Public adoption of the technology is still remain amid uncertainities due to various reasons, hence the speculative air regarding the after effect of the technology should be thinned out based on scientific evidences. corporate nature this technology has to be diminished through extented funding in research and development sector by government agencies. adoption of this technology shouldn’t be considered as one for last minute , since it require huge amount of time and resources. Instead of waiting for a greater crisis to come for an action, we should move forward and make available more products in pipeline by forseeing future demands.