Okra (Abelmoschus esculentus ), belonging to Malvaceae family is originally included in the genus Hibiscus; however, section Abelmoschus is now accepted as distinct genus on the basis of its caducous nature of the calyx (Dhankhar et al., 2005). This genus is important because of two cultivated species, A. esculentus and A. caillei (Patil et al., 2015). Okra is an allopolyploid, having lowest known chromosome number as 2n = 56 in A. angulosus and the highest around 200 in A. caillei, which is an amphipolyploid (allotetraploid) between A. esculentus (2n = 130-140) and A. manihot (2n = 60-68). Among the genus Abelmoschus, A. esculentus is most widely cultivated for its pods throughout Asia and Africa. In the West and Central Africa, A. caillei is cultivated for leaves and pods. A. moschatus is grown as an ornamental plant and also for its aromatic seeds. Okra has been found to possess various ethno-pharmacological and medicinal properties against cancer, high-cholesterol, and Diabetes mellitus. Cultivated okra is mostly susceptible to a large number of begomoviruses having overlapping host range, like radish, tomato, cotton etc. Yellow vein mosaic disease (YVMD), okra leaf curl disease (OLCD), and okra enation leaf curl disease (OELCD) are caused by viruses of genus Begomovirus (family Geminiviridae) resulting in the serious losses in okra cultivation (Venkataravanappa et al ., 2013). Under ﬁeld conditions, infected plants were found to be associated with heavy infestations of the whiteﬂyBemisia tabaci, the vector of begomoviruses (Venkataravanappaet al., 2015). The loss in yield, due toYellow vein mosaic virus (YVMV) and/or Okra enation leaf curl virus (OELCV) in okra was found ranging from 30 to 100% depending on the age of the plant at the time of infection (Singh, 1996).

Management: the emergence of polyphagous “B” biotype of Bemisia tabaci, mixed cropping system, along with the increased host range of more than 600 plant species has also resulted in geminiviruses infecting previously unaﬀected crops. Unlike fungicides and bactericides, no commercial viricides have yet been developed; therefore, viral diseases are not amenable to control by any direct methods. Therefore, management of insect vector is a practical solution. Management of heavy whitefly infestations is quite difficult but prevention is always better than cure. The whiteflies management is possible through utilization of integrated pests management strategies.

Begomovirus induced disease development and strategies of its management in okra 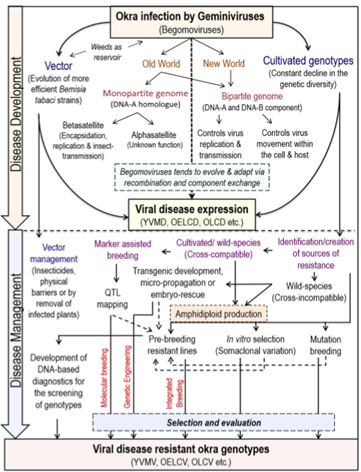 Conclusion: Historically, more than 99% of the worldwide okra cultivation has been localized in the developing countries of Asia and Africa. Until recently, very little attention has been paid to its genetic improvement, and genomic information on Abelmoschus is practically absent.