Energy is an important factor in our daily lives, helping to improve the quality of life and playing a significant role in the country's economic development. In particular, energy demand in India, where this study is conducted, has been increasing continuously together with the energy prices. Furthermore, India has to face the environmental impacts caused by energy usage, part..
Bio energy crop: Cassava
Authors: Panchal Bhakti B., Patel Krishna D. and Dr. S. N. Saravaiya
Department of Vegetable Science,
ASPEE College of Horticulture and Forestry,
Navsari Agricultural University, Navsari-396450
bhakti.b.panchal@gmail.com 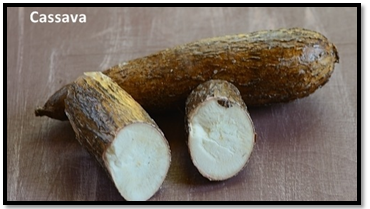 • Energy is an important factor in our daily lives, helping to improve the quality of life and playing a significant role in the country’s economic development. In particular, energy demand in India, where this study is conducted, has been increasing continuously together with the energy prices.
• Furthermore, India has to face the environmental impacts caused by energy usage, particularly the impact on climate change resulting from, for example, global warming.

• USA covers the oil wells of Kuwait and other Gulf countries in few 3-ears also indicate that the mineral oils are limited. Self sufficiency in energy requirement is critical to the success of any growing economy.
• With increasing energy consumption, dependence on fossil fuels will necessarily have to be reduced. Now it is necessary to discover an alternative source of petroleum products. Biofuel is a type of alternative energy that is obtained from living or biological materials.
• Biofuel is a type of fuel whose energy is derived from biological carbon fixation. Biofuel include flues derived from biomass conservation, as well as solid biomass, liquid fuels and various biogases.

• Biofuels are gaining increased public and scientific attention, driven by factors such as oil price hikes and the need for increased energy security.
• Due to revolution and the white revolution, we are now self dependent in the production of food grains and milk.
• Now it is time to think about black revolution to attain the self dependence in the production of ethanol (biofuel) and mixed it at the level of 10% in petrol and secondly, production of biodiesel. In this context, year 2004 was celebrated as the year of Bio-trade. India has rich biomass resources which can be converted into renewable energy.

• Cassava rhizome is an attractive lignocellulosic material for bioethanol production, which mostly comes from agricultural residuals. More importantly, cassava rhizome is non-edible material.
• An energy crop is a plant grown at a low cost and low maintenance harvest used to make biofuels, or directly exploited for its energy content. Conventional energy crops include Barbados nut (Jatropha curcas), sunflower (Helianthus annus), sugarcane (Saccharum officinarum), soyabean (Glycine max), and maize (Zea mays). Cassava is yet to gain global recognition as an energy crop, although its importance in this regard is known in several places.

• The center of origin of cassava is in Central Brazil, where it has been a staple food for the native Indian population for at least 4000 years, and continues to be so until this day.
• Brazil is still the second largest producer of cassava in the world, after Nigeria and followed by Thailand. In semi-arid northeastern Brazil, farina, made from grated and roasted cassava roots, remains a very popular food. In Nigeria and much of West Africa, cassava is the most important food staple, eaten mostly as “gari”, another toasted product made by household processors from grated cassava roots.
• Currently, Thailand is the largest exporter of cassava products in the world which represents more than 80% of its global trade. Among the important cassava root products are tapioca starch and flour. Tapioca starch (95% starch) could be used in many industries such as food, textile, chemical and pharmaceutica.
• Ethanol fuel is ethanol (ethyl alcohol, 2C2H5OH), the same type of alcohol found in alcoholic beverages. It can be used as fuel, mainly as a biofuel alternative to gasoline, and is widely used by flex-fuel light vehicles in Brazil, and as an oxygenate to gasoline in the United States.

• Cassava is the basis of a multitude of products, including food, flour, animal feed, alcohol, starches for sizing paper and textiles, sweeteners, prepared foods and bio-degradable products.
• The products are derived from a number of forms of cassava, ranging from fresh leaves and roots to modified cassava starch. The degree of processing and the technical requirements tend to increase from the fresh form to the modified starch form.
• While some cassava is sold as fresh roots or leaves, even these products usually receive some special post-harvest handling or treatment before they are consumed. As cassava normally requires some form of processing before it can be consumed or sold, processing is of central importance in the future of the crop.
• While the market potentials are great, it must be remembered that these opportunities are location and time specific. Because of the specificity of market opportunities it is impossible to compile a list of priority market opportunities.

Products from leaves and roots

• Fresh roots and leaves are used primarily as human food. Because of their perishability, most roots are usually consumed or marketed close to the centres of production.
• Traditional methods for preserving fresh roots include packing roots in moist mulch or removing leaves two weeks prior to harvest to increase root shelf life to two weeks. In Colombia, CIAT researchers found that preservative treatments such as dipping fresh roots in wax or paraffin and storing them in plastic bags reduced vascular streak and prolonged storage for 3 to 4 weeks. Roots can be peeled, chopped into chunks and frozen for specialized markets.
• Cassava leaves can be eaten as a fresh vegetable, ground fresh and frozen in plastic bags, or dried and ground for sale in plastic bags.
• The leaves are more nutritionally balanced than the roots and can help to prevent certain deficiency diseases. Leaves, however, may be high in hydrocyanic acid (HCN), but the HCN can be reduced to safe levels in most cases when the liquid is squeezed out after grinding and through evaporation during cooking.

• Higher incomes and urbanization are associated with greater consumption of convenience foods and foods that are perceived as more desirable foods. In cassava-producing countries, urbanization represents an opportunity for producers to produce cassava for a larger consuming population.
• The implication is that cassava markets for fresh cassava can grow if the cassava products are convenient and in a more desirable form. Costa Rica has demonstrated that there is a growing export market for fresh cassava - if it is packaged in an attractive and useful manner.

• Cassava starch is used directly in different ways or as a raw material for further processing. Special features of cassava starch are its viscosity, resistance to shear stress and resistance to freezing. The main classes of starch-based products are:
- unmodified or native starch;
- modified (physical, chemical, biological) starches for industrial purposes;
- Sweeteners, including high-fructose syrup and glucose (dextrin, monosodium glutamate, pharmaceuticals, etc.).

• Considering the fact that cassava is a very cheap and important food crop that requires little skill to cultivate, with moderate requirement for soil nutrient, climatic condition and water, its cultivation should be highly encouraged mostly in rural areas, so as to bring sustainable growth and development to such areas. Furthermore, also cassava is a hardy and grown of small holding farmers of south India. Thus, by processing of cassava it is highly beneficial to the marginal farmers.

1. Baumer, G.W. (1962). Processing of garri and tapioca in rural industries. Report to the Federal Government of Nigeria. Report No. 1486, pp 154.
2. http://www.arc.agric.za/arc-iic/Pages/Cassava.aspx
3. http://www.frombraziltoyou.org/cassava-its-importance