Biocontrol is a form of natural control and almost all plant disease biocontrol agents are safe to humans, animals and the environment. Antagonistic agents usually target only a few pathogenic organisms. They have diverse mode of action and there is less likelihood of the pathogen developing resistance...
Indian agriculture is facing challenges in increasing the productivity from its limited resources to meet the needs of growing human population. Some of the most significant barriers to efficient crop production are represented by pests, diseases, and weeds. A large part of crop management is devoted to reducing their impact. A range of disease management options are available depending on circumstances; they include chemical, biological and genetic control. The annual losses caused by the pests, diseases, and weeds were estimated at more than Rs. 7000 crores. Presently, practiced plant protection measures mainly orient towards chemical control and as a result there is a steady increase in pesticide usage in Indian agriculture. Chemical pesticide application has gone up from 2.2g/ha in 1950 to the current level of 650g/ha, which show a 300 fold increase. However, it is not possible to achieve the desired level of crop production by using chemical pesticides. Their use has several disadvantages like low cost-benefit ratio, poor- availability; mode of action is selective against pathogens, development of resistance against pest and resurgence of controlled pests, they are health hazards, toxic to plants, animals and natural enemies and pollute the environment etc. because of high intensive agricultural practices and chemicalization of agriculture, the age old ecofriendly cultural practices to combat plant pathogens are not being practiced in Indian agriculture. The pace of development and durability of resistant varieties has been slow and unreliable. Considering all these limitations researchers need to develop such practices that alone or in combination with other practices bring about a good degree of reduction in disease incidence and ensure sustainability of production, cost effectiveness and healthy ecosystem. Biological control is an important approach in this direction.

According to the definition, biological control is the reduction of inoculum density or disease producing activities of the pathogen in its active or dormant state with the help of one or more organisms. It may be accomplished either naturally or by manipulation of host or antagonists or environmental conditions, or by mass introduction of one or more antagonists. It is a natural phenomenon based on a fact that every biological entity has its adversary in nature. According to Darwin, in the struggle of life everything is born to eat and get eaten. This maintains the biological balance under natural conditions.

There are two forms of biological control:

Classical biocontrol- it involves deliberate release of the organisms into the environment. These either establish effectively or have to be periodically augmented to maintain effective levels of control.

Production of biopesticides â€" several natural products extracted or fermented from various sources are also used as biocontrol agents. These formulations known as biopesticides or biofertilizers (depending on the primary benefit provided to the host plant), may be very simple mixtures of natural ingredients with specific activity or complex mixtures with multiple effects on the host as well as the target pest or pathogen. The most significant biopesticides success has been obtained by Bt, an insecticide based on a protein crystal produced by the bacterium Bacillus thuringiensis.

Biocontrol agents are three types of entities involved in biological control, these are:

a. Avirulent or hypovirulent individuals within the pathogenic species itself and cause the reduction of virulent strain of the pathogen by cross- protection mechanism.

b. Genetically modified host plant, that may be manipulated either by cultural practices or with microorganisms and provide resistance against pathogens.

c. Antagonists: these include all classes and groups of organisms existing in an ecosystem and interfere with the disease producing activities of the pathogens.

Biocontrol results from various types of interactions between biocontrol agents and plant pathogens. These interactions include competition, parasitism, antibiosis and inactivation of pathogenic enzymes either directly act on the pathogens and reduce their density and capacity or they indirectly reduce disease index by promoting plant growth and inducing resistance in them.

a. Competition is a mechanism of biocontrol, in which the biocontrol agents compete with the target organism for nutrients, oxygen and space. It seems to be an important mechanism of biocontrol but itâ€™s difficult to access its actual contribution in biocontrol. Rhizospheric competition is an important mechanism of competition especially with seed treatments. Trichoderma spp. is often very fast growing and rapidly colonizes substrates and thus excluding pathogens like Fusarium. Heterotrophic bacteria like fluorescent Pseudomonas catabolize diverse nutrients and have fast generation times in the root zone and hence, they compete successfully with slow growing pathogens. 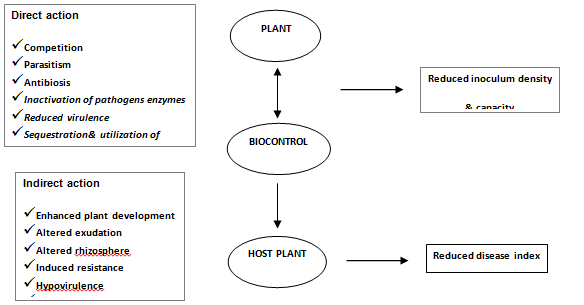 b. Antibiosis - In Antibiosis, the biocontrol agents produce some volatile or non-volatile antibiotics or some type of toxins and secondary metabolites that either can kills or has some sort of detrimental effect on the target organisms. Many antibiotics have been isolated from fungal a swell as bacterial bioagents that are effective against a large number of plant pathogens. Trichoderma virens produce virin and other pyrones that check the growth of Rhizoctonia solani.

c. Mycoparasitism - Mycoparasitism is another important mechanism of action of fungal biocontrol agents. In this case the biocontrol agent can attack and feed directly on the target organism or the biocontrol agent can produce some sort of toxin that kills the target organism and then it feeds on the dead target. This is a complex process involving chemotropic growth of biocontrol agent towards the target organism, coiling and finally dissolution of cell wall by the activity of enzymes. Trichoderma harzianum exhibits excellent mycoparasitic activities against Rhizoctonia solani. Hyphae of T. harzianum develops small haustoria like structures, it coiled around host hyphae and then lyzed the host cell wall. Biocontrol agents not only destruct the inoculum of pathogens but also promote the growth of host plants either by suppressing deleterious root microflora or by production of growth stimulating factors that may be hormones or growth activators. They induced increased nutrients uptake by the process of solubilization and sequestration of nutrients and /or enhanced root growth. With the help of the aforesaid growth mechanism the the biocontrol agents indirectly provide indirectly provide resistance to the plants against pathogens.

d. Induced resistance- Induction of host plant resistance is an indirect mechanism of biological control. plants contain so many defense genes that involves in the production of antifungal, antibacterial and antiviral compounds like PR proteins, phytoalexins etc. but they are sleepy genes and required elicitors to activate them. A number of root colonizing microbes have been identified as potential inducers of host resistance. Some biocontrol strains of Pseudomonas sp. and Trichoderma spp. are known to strongly induce plant host defenses. The PGPR strains produce a number of chemical elicitors and ISR inducers upon inoculation, including salicylic acid, siderophores, lipopolysaccharides and other volatile substances. They are likely to stimulate host defense over the course of a plantâ€™s lifecycle and effectively control multiple diseases caused by different plant pathogens, including anthracnose, angular leaf spot and bacterial wilts.

f. Solubilization phenomenon is used by biocontrol agents to convert complex inorganic nutrients to soluble forms that become available for absorption to the plant roots and result in increased plant growth. Biocontrol agents produce some complex macro molecules known as siderophores. These are extracellular compounds with low molecular weight and having affinity for ferric iron, result in chelation of iron and make it unavailable to microorganisms. Yellow green fluorescent compounds are produced by fluorescent Pseudomonads in iron limiting media. They enhanced plant growth, health of roots and reduced population of deleterious microorganisms. Some biocontrol organisms can also inactivate enzymes produced by the pathogens.

Major methods of the delivery of biocontrol agents:

• Seed treatment â€" is very successful in controlling seed and seedling diseases in vegetables, fruit, forest and other plantation crop nurseries. Biological seed treatment of bigger seeds such as soybean, French bean, wheat etc. is done @ 6-8 gm/kg seeds while small seeds such as tomato, brinjal, cauliflower are treated @ 4-6 gm/kg seeds. For effective treatment, seeds should be moistened with water before treating with biocontrol agents and dried under shade.
• Rhizome treatment â€" rhizomes of different crops like ginger, potato etc are dipped in the biocontrol agent solution @ 8-10 gm/l of water for 30 minutes, dried under shade and then planted in the field.
• Seedling treatment â€" before transplanting, roots of seedlings are washed and dipped in the solution of biocontrol agents @ 8-10 gm/l for 30 minutes and then planted.
• Spray â€" biocontrol agents are sprayed @ 8-10 gm/l on the field crops at 10-12 days of interval to manage certain air- borne diseases.

• Several technologies have been developed for the mass multiplication of BCAs. In this concern Trichoderma, Pseudomonas, Metarhizium, Beauveria and Verticillium has been successfully mass multiplied on easily available substrates like cow dung, jhangora seeds etc. By this method, farmer can multiply one kg of bioagents in one ton FYM within 21 to 28 days.
• Value addition of vermicompost could be done by supplementation of BCAs @ 250g/ quintal.
• Integration of BCAs with chemical control has reduced the high doses of pesticides application to control diseases. Certain fungicides have been found to be compatible with BCAs to be used as potential control against several diseases.

Thus, biological control can prove to be a potential component for the IPM practitioners it not only suppresses the pathogen attack but also enhances the fertility of soil by enriching with certain nutrients. However, these BCAs are restricted to a few diseases and also are not so successful in field conditions, so research is going on for developing more effective strains that can withstand the various environmental stresses.

About Author / Additional Info:
I am a Scientist in Plant Pathology at RARS, JNKVV, M.P.