The modern agricultural practices such as increased use of fertilizers, pesticides, high yielding varieties etc., coupled with intensive and extensive cultivation of crops have contributed for increased agricultural production in the country during past 3 decades, but at the same time a number of new problems have emerged especially in the field of plant protection. Over depend..
Biopesticides in Horticultural Crops
Author: Poonam Kumari

The modern agricultural practices such as increased use of fertilizers, pesticides, high yielding varieties etc., coupled with intensive and extensive cultivation of crops have contributed for increased agricultural production in the country during past 3 decades, but at the same time a number of new problems have emerged especially in the field of plant protection. Over dependence on pesticides has led to problems such as development of resistance in pest species, resurgence in pest populations, emergence of new crop pests, environmental pollution and disruption in biodiversity. Moreover, with increased cost of crop protection, the net income per unit area in case of crops like cotton, paddy and certain vegetable has come down sharply, making production of these crops uneconomical.

The concept of Biopesticides was born out of the discontent and crisis brought on by the unrestricted use of pesticides. In this regard biopesticides play important role in the management of insect pests of horticultural crops. These are safe to non target organisms including humans. According to WTO 3 million agriculture workers experience severe poisoning from pesticides. Among them about 18,000 die each year.

Biopesticides are certain types of pesticides derived from such natural materials as animals, plants, bacteria, and certain minerals. For example, neem cake and pongamia cake have pesticidal applications and are considered biopesticides.

This following pie chart shows that microbial biopesticides have largest market among all the biopesticides,followed by pheromones, beneficial insects and biochemicals. 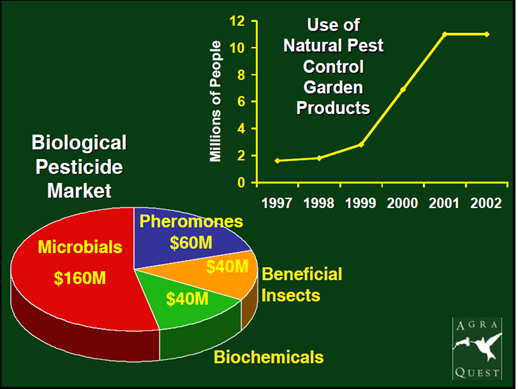 Insect pests, nematodes and plant diseases of horticultural crops are generally controlled by frequent applications of chemical pesticides with an objective to increase crop productivity and obtain greater profit in conventional farming. With consumers' awareness and perception, horticultural crops without residue of chemicals are being preferred in local and export markets. For this purpose, plant-derived crude products or formulated pesticides can be eco-friendly, effective and economical for an average producer. Neem (Azadirachta indica A. Juss.) is being widely used in the form of water extracts of leaves or seeds and neem oil owing to its effects as an oviposition deterrent, sterilant, antifeedant, repellent and pesticide against insects, and as an inhibitor of spore germination and development of pathogens and affecting penetration by nematodes into roots. Other indigenous plants also show potential in pest management. Further research needs to be focused on the synthesis and commercial formulations of botanicals for control of pests and pathogens.

Plants, during their long evolution, have synthesized a diverse array of chemicals to prevent their colonization by insects and other herbivores. They produce terpenoids, alkaloids, flavonoids, phenolic compounds, unusual amino acids etc. These chemicals exhibit repellent, feeding and oviposition deterrent and insecticidal properties besides interfering with their normal growth, development and reproduction. Several plant based insecticides such as nicotinoids, natural pyrethrins, rotenoids, neem products, etc have been used in the past for suppression of pest species. Among them, neem based products are ideally suited for practical utilization because of their greater effectiveness against diverse group of insect pests under field conditions, ready availability and simple methods of preparation of insecticidal products.

Neem has been evaluated against more than 500 species of insects at global level and most of these insects have been found to be susceptible. Neem products give good control of caterpillars such as diamondback moth on Cole crops and gram pod borer on red gram, cotton, tomato etc.; grass hoppers, leaf hoppers, plant hoppers, leaf miners, whiteflies, scales and mealy bugs. Neem kernel powder at 1 to 2 per cent gives good control of pulse beetle and other storage pests.

Neem and Pongamia oil soaps: The potassium soaps (Soft soaps) of neem and pongamia oils at 1 per cent are effective against diamond back moth, leafhopper, aphids, leaf miners, fruit borers and fruit fly in vegetable crops. They are also effective against mango leaf hopper and citrus leaf miner. Efficacy may be reduced at high temperatures.

In recent years, commercial neem products with 300, 1500, 10,000, 30,000 and 50, 000 ppm of azadirachtin have been introduced. Field and laboratory studies have shown that the aqueous neem seed kernel extract (NSKE at 4-5%) is more effective and economical to use compared to commercial neem based products . Whole neem seed powder extract can also be efficiently used in place of neem seed kernel extract. Similarly, neem oil emulsions (2-4%) prepared by using soap can be effectively used against scales and mealy bugs on fruit trees such as guava, custard apple and sapota.

Preparation of Neem seed kernel extract (NSKE): Select good quality seeds free from fungal infection. Remove seed coat by pounding and grind the kernels into fine powder. Use 4 kg of kernel powder to prepare 100 litres of 4 per cent extract. Soak kernel powder in 20-25 litres of water overnight. Pass the soaked material through thin cloth and collect the filterate. Make up the volume to 100 litres by adding water. Add liquid soap (1 ml/litres) before spraying the extract.

Oil emulsions are normally used at 1-2 per cent on vegetables and 3-4 per cent on fruit trees like guava, custard apple and sapota. To prepare 2 per cent oil emulsion, oil ( 2 litres) and liquid soap (500 ml) should be mixed thoroughly and then added to 100 litres of water to get stable emulsion. The emulsion should be agitated constantly while spraying. However, oils may be toxic at high doses and high temperatures.

Tobacco leaf extract is effective against soft-bodied insects like aphids, thrips, etc. 250 g of tobacco dust is soaked in 4.5 litres of water overnight, filtered, made up to 25 litres and sprayed by adding soap solution (0.5 ml /l).

Microbial Insecticides: The insecticidal substances obtained from the microorganisms are microbial insecticides. The insecticidal crystal proteins (endotoxins) produced by the bacterium, Bacillus thuringiensis kurstaki are effective against lepidopteran pest species. These toxins are very specific in their action, easily bio-degradable and being stomach poisons, safer to non-target organisms. Presently, many commercial products are available in the market for use against caterpillar pests. However, some pests like diamondback moth on Cole crops have developed resistance to certain Bt. endotoxins.

Pseudomonas florescens : The foliar application of this bacteria is supposed to reduce many insect pests like leaf miner, rice leaf folder etc. and diseases like bacterial wilt, fungal diseases and nematodes. Regular sprays are advocated to minimize the disease incidence in main field and these are believed to induce resistance in plants. Treating the nursery @50 g/sq. meter with this antagonistic bacteria induces disease resistance against bacterial wilt in tomato. Pseudomonas fluorescens suppress plant diseases by protecting the seeds and roots from fungal infections. This bacterium is mass-produced using fermentation technology. It is most effective against soft rot causing bacteria. Erwinia carotovora (carrot) Induced systemic resistance through foliar spray and seed treatment of Pseudomonas florescens against H. armigera . Pseudomonas florescens influences the growth and development of insectsat all stages of their growth. Pseudomonas maltophi affects the growth of larval stage of Helicoverpa zea, leading to reduced adult emergence, (Bong and Sikorowski, 1991).

In the present study, among the variousdoses of Pseudomonas florescens used as foliar spray and seedtreatment the doses of 10 g/lit of water and 30 g/kg of seed recorded higher amount of biochemical compounds like phenol, peroxidase, and PAL which increased gradually up to 20 days after spraying.

After 20th day decreasing trend of these compounds was observed. The Effect of organic amendments, botanicals and biopesticides against tomato fruit borer, Helicoverpa armigera ....240 present findings are comparable with findings of Thangavelu et al. (2003).

A field study was carried out on the efficacy of different sequential application of some novel insecticides viz., novaluron 10 E.C., indoxacarb 14.5 S.C., bifenthrin 10 E.C., lambda cyhalothrin 5 E.C., and biopesticides viz., nucleopolyhedrovirus (NPV) of Helicoverpa armigera, Bacillus thuringiensis var. kurstaki and neemarin, against H. armigera in comparison with sequential application ofconventional insecticide i.e. endosulfan 35 E.C. and untreated control on tomato hybrid Pusa Ruby. Results showed that among different sequential application of insecticides, indoxacarb with lowest fruit infestation of2.53 and 2.83 and highest yield of39.45 & 38.85 q/ha were recorded' during both the seasons, respectively. While among the biopesticides, neemarin followed by Bt and NPV with mean fruit yield of 30.27 and 29.60, 28.17 and 27.61 and 26.70 and 26.11 q/ha were optained in two seasons, respectively. Relatively higher numbers of predatory coccinelids (Coccinella septumpunctata.) were recorded in endosulfan insecticides as well as biopesticidesapplied plots as compared to treated plots.

The treatments of Bt and NPV ranked in moderately effective group for the control offruit borer and find support from the work of Bhosle et al. (2007). They reported that dipel (Bt) was effective next to carbaryl in controlling the fruit borer. Similarly Singh and Yadav (2007) found biolep (Bt) @ 0.20% effective next to insecticides used.

Entomopathogenic fungi: Fungal species can act as a parasite of insects and kill or seriously disables them. These fungi usually attach to the external body surface of insects in the form of microscopic bodies (usually asexual, mitosporic spores also called conidia).

Metarrhizium anisopliae : is a widely distributed soil-inhabiting fungus. The spores of M. anisopliae can be formulated as dust and sprayable formulation. It is used to control termites, mosquitoes, leafhopper, beetles etc.

Entomopathogenic Virus: Entomopathogenic viruses are used as biological control agent as it infects or kills the pests by causing pathogenicity to the insects. Commonly used viruses are Nuclear Polyhedrosis Virus (NPV), Granulosis virus (GV). NPV are host specific. Larvae infected with GV and NPV usually die within 5-12 days after infection. These viruses are produced on the host insects and are formulated both as liquid and dust formulation . The safety aspects of botanicals and biopesticides to non-target organisms had been already studied by several workers (Raguramanand Singh, 1997; Rosaish, 2001). HaNPV was not found pathogenic to T. chilonis (Balasubramanian et al., 2001).

Fungal antagonists: These are those fungus species, which act against the harmful microorganisms and their products.

Trichoderma spp . ie ., Trichoderma viride, T. harzianum and T. virens are most extensively used fungal antagonists. They are used for the management of soil-borne pathogens by seed treatment and soil application.

Light and pheromone traps: can be used to monitor and suppress certain pest species. Yellow sticky traps can be used to monitor aphids and whitefly. In cabbage and cauliflower, light raps are useful in reducing diamond back moth incidence. A bulb (100 watts) is hung in front of a thin gunny bag or polyethylene sheet (3’x4’) smeared with oil or grease. A bucket with water can also be kept below the bulb. About 6-8 light traps are to be set up per hectare. In Bangladesh, brinjal shoot and fruit borer was effectively managed by errecting 32 pheromone traps per acre and clean cultivation by destroying infested shoots and fruits. Lures like methyl eugenol, cue-lure can be used to suppress fruit flies. Red palm weevil on coconut can be controlled by using sex pheromone traps.

Parasitoid is an organism that spends a significant portion of its life cycle attached to or within a single host which it ultimately kills (and often consumes) in the process. The egg parasitoid Trichogramma spp. is distributed worldwide, parasitising over 200 species of insects belonging to Lepidoptera, Coleoptera, Neuroptera and Diptera. Trichogramma parasitization on eggs of Helicoverpa armigera. The lowest number of eggs was laid in Neem oil 3% (15.00) and followed by NSKE+ Spinosad (17.00). Lowest percentage of parasitism by Trichogramma on eggs of Helicoverpa was recorded in Neem oil 3% (77.32%) followed by NSKE + Spinosad(86.20%) compared to untreated check(90 %).

Predators: An entomophagous species that generally consumes more than one prey individual to complete its development is called a predator.

Lady bird beetle is a voracious feeder of mealybugs in both nymphal and adult stage. It also feed on cabbage aphid.

Weed Feeder Those organisms, which feed on the weeds depleting or eliminating them, are called Weed Feeder.

Zygogramma bicolorata . This is Chrysomelid beetle used as a biocontrol agent for the control of the carrot weed, Parthenium hysterophorus. Larvae and adult beetles feed on the leaves of this weed.