Black caraway [Bunium persicum (Boiss.) B. Fedtsch] belonging to the family Apiaceae is a valuable perennial herb with tuberous root and frilly leaves bearing schizocarp fruits, erroneously called as seeds, around 4 mm in length, brown to dark brown in color when mature used as culinary spice.Besides being used as a spice its fruits are used as remedy for liver complaints, abdominal and colic pains.Sometimes taken directly with water to cure indigestion, dysentery and as carminative.

The species is distributed in the mountainous regions of Iran, Tajkistan, Afganistan, Baluchistan and western part of Northern India and is believed to have originated in the area between Central Asia and Northern India.In India, it is found growing naturally in north-western Himalayas at an altitude of 1800-3500 m asl in forests, grassy slopes and in arid zones as well.Despite being wild in distribution it has been a popular highly valuable cash crop over the years in Jammu Kashmir and Himachal Pradesh.It is commonly called as kala zeera, siah zeera and shahi zeera, latter name refers to its popularity in the imperial (Mughal) cuisines of Northern India.Years ago, in our childhood days while going to school we would easily locate this plant near a foothill and fondly eat its seed heads and tubers.During those days it thrived in most of the karewa lands throughout Kashmir valley, flowering and maturing in the months of June-August.However, during last three to four decades a drastic decline in its populations has generally been recorded in Kashmir.The plant is now endangered having been confined to some hilly tracts near Srinagar, Gurez, Machill, Tanghdar, Karnah and some karewas of Pulwama and Budgam.It also grows in hilly tracts of Padder in Kishtwar district of Jammu province as well as in Ladakh province especially in Kargil district in moist shady places and along water courses.Nowadays throughout these places also the plant is under serious threat.

During an exploration and germplasm collection programme conducted in 2015 by ICAR-NBPGR Regional Station Srinagar in collaboration with NRC (SS) Ajmer and SKUAST (K), 12 germplasm accessions of Bunium persicum were collected with lot of hard work from Abhama, Chrar-e-sharief, Gurez, Padder and Wasturwan where only a decade back large populations of this plant have been reported.These accessions differing in size and color have been conserved in National Gene Bank at ICAR-NBPGR New Delhi for future use.

It is general opinion of the local people as well that this once common wealth supporting livelihood of thousands of people has vanished to a great extent.Being a high value crop used as condiment and flavoring agent and endowed with medicinal properties effective against abdominal and colic pain it has always been overharvested.Besides, local people frequently harvest it by uprooting the plants with physiologically immature fruits.In this way mature fruits are often being prevented to fall to the ground.Only mature fruits have the ability to germinate and produce tubers after two to three years of growth before coming to flowering. 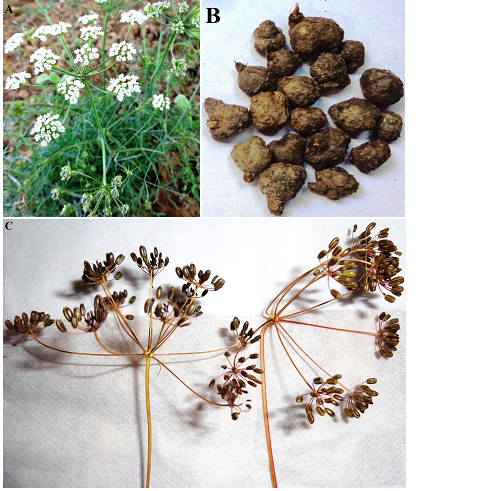 Flowering plant (A), tubers (B) and seed heads (C) of Bunium persicum