Brassica Juncea (Indian mustard) is an annual growing perennial herb which is amphidiploid with a chromosome number of 18.It is highly variable species which is cultivated since centuries as a vegetable and oil plant. It had various medicinal and therapeutic uses...
Introduction
Brassica Juncea, also known as Indian mustard, a species of brassicacea family with following classification-

Brassica juncea can be divided into four sub-species, with different morphology, quality characteristics and uses:

1. ssp. integrifolia, used as a leaf vegetable in Asia.

2. ssp. juncea, cultivated mainly for its seed, occasionally as fodder.

4. ssp. taisai, stalks and leafs are used as vegetables in China

There are both vegetable and oilseed varieties of B. juncea that possibly have different origins (Hemingway, 1976). Both types are considered to be natural amphidiploids (AABB genome, 2n=36) of B. rapa (AA genome, 2n=20) by B. nigra (BB genome, 2n=16) crosses. Axelsson et al. (2000) have shown by molecular analysis that B. juncea contains conserved genomes of the progenitor species.

It is an annual growing perennial herb upto 1.0m or more tall. It has long, erect and patent branches. It's lower leaves are petioled, green and sometimes with a white bloom, ovate to obovate, variously lobed with toothed, scalloped or frilled edges, lyrate-pinnatisect, with 1-2 lobes or leaflets on each side and a larger sparsely setose, terminal lobe; upper leaves subentire, short petioled, 30-60 mm long, 2-3.5 mm wide, constricted at intervals, sessile, attenuate into a tapering, seedless, short beak 5-10 mm long. 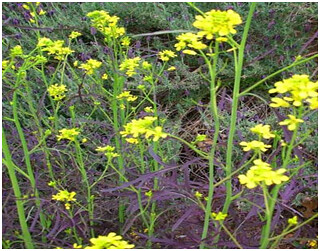 The Centres of Origin of the Species

The origins of B. juncea are unclear. B. juncea is an amphidiploid with a chromosome number of 18. It is believed to have derived from natural interspecific hybridization between B. nigra (n=8) and B. rapa (n=10). B. juncea likely originated where distributions of B. nigra and B. rapa overlap, such as in the Middle East and neighbouring regions. The foliage types (Chinese) and oleiferous types (Indian) may have had separate origins.

B. juncea probably evolved somewhere between Eastern Europe and China, where the progenitor species are sympatric. Most of the variation occurs in western and central China. It occurs as a weed in the south of the European part of Russia, the Caucasus, central Asia and southern Siberia and as a casual or feral plant in south and Southeast Asia, Africa and America.

Brown mustard can be sown directly or transplanted. Direct sowing is mainly used when time is a limiting factor and where there is a market that will accept smaller leaves. This system is frequently used in Zambia in wet areas called 'dambos'. The weight of 1000 seeds is 1.7-2 g. The seeds need to be mixed with sand and broadcast thinly to avoid the need for removing too many seedlings later on. The first harvest can be in the form of thinned-out seedlings, collected after about 35 days from sowing. Transplanting is common and seedlings are raised in 1 m wide nursery beds with fertile finely-tilled soil. Seed beds should be prepared by loosening the soil and incorporating up to 50 kg of well-fermented manure per 10 m2. Seed is sown in drills 25-30 cm apart and seedlings are thinned to a spacing of 5-10 cm. Seedlings need to be adequately watered. They are ready for transplanting after 20-30 days when they have 3-4 true leaves, and are planted at a spacing of 30-50 cm between rows and 20-40 cm in the row, depending on the size of the plant required. When grown as an oil crop, seeding is at a rate of 4-6 kg/ha. Plant density may vary as brown mustard has a considerable capacity to compensate for an irregular plant stand.

Seed germinates within 5 days after sowing at 20-25°C. Under good conditions plants grow rapidly and leaves are harvestable after 3 weeks when plants have developed 6-8 fully expanded leaves, but harvesting will start later when larger leaves are demanded for sale. Under tropical African conditions, flowering occurs early as low temperatures are not required for flower induction. Water stress or low soil fertility promote early flowering. Brassica juncea is self-fertile, but bees may effect cross-pollination. Fruits develop rapidly and the seeds can be ready for harvesting within 4 weeks from flowering.

• In Africa and many parts of Asia the leaves are eaten as a vegetable; they are often shredded, cooked and served as a side dish with the staple food.

• Brown mustard is reported to have anodyne, aperient, diuretic, emetic and rubefacient properties. It is a folk remedy for arthritis, foot ache, lumbago and rheumatism.

• Brassica juncea is grown mainly for its seed used in the fabrication of brown mustard or for the extraction of vegetable oil.

• Brown mustard oil is used against skin eruptions and ulcers. In Tanzania the roots have been given to cows to promote milk production.

• A peculiar use of mustard oil is to retard the fermentation process when making cider from apples. The seeds are also used in birdseed mixtures. The remaining seed meal is high in protein, but the high glucosinolate content makes it unacceptable for human or for monogastric-animal consumption.

• Mustard oil is one of the major edible oils in Bangladesh, India and Pakistan, appreciated for its special taste and pungency. In adjacent parts of the former Soviet Union it is used as a substitute for olive oil. In Western countries its use as edible oil is restricted because of the high erucic acid content.

• Leaves applied to the forehead are said to relieve headache. The leaves are eaten in soups to treat bladder inflammation or haemorrhage.