Apricot is one of the most nutritive, delicious and commercially important fruit crop of Ladakh. Due to climate change many new pests are emerging in this crop and one among them is the codling moth. Codling moth is a member of the lepidopteran family Tortricidae. ..
Codling Moth a Notorious Pest of Apricot in Sham conditions of Ladakh Region
Author: Kunzang Lamo

Apricot (Prunus armeniaca), locally known as “chulli” is one of the most nutritive, delicious and commercially important fruit crop of Ladakh. It has a wide range of distribution in different parts of Ladakh with particularly abundance in Sham areas (lower Ladakh) including Dha-Hanu, Garkhon, Skurbuchan, Domkhar, Wanla, Khaltse and Timosgang. Apricot in Ladakh, is believed to have been introduced a century back either from China or Central Asia. Since then, apricot has become one of the most preferred and important commercial crop of Ladakh. Apricot can be grown easily and produce satisfactorily in the lower area of Ladakh. Usually the apricot growers do not follow the training and pruning practices in Ladakh. Apricot tree produce beautiful white or pinkish flowers in spring season that not only ensures the continuity of their population but also give a unique look to the sandy desert of trans-Himalaya. Apricot start ripening in the month of August-September.

Due to climate change many new pests are emerging in this crop and one among them is the codling moth. Codling moth (Cydia pomonella L) is a member of the lepidopteran family Tortricidae. The pest has been reported from Europe, USA, Canada, South Africa, Australia, New Zealand, Afghanistan and Pakistan (Sheldeshova, 1967). It is native to Europe and was introduced to northern America, where it has been considered as one of the serious insect-pest of deciduous fruits in almost every apple growing regions of the world. In India, this pest is restricted to cold arid region (Ladakh) of Jammu and Kashmi State. This pest is supposed to have entered into Ladakh from the North West frontier province of Pakistan and Afghanistan where it created havoc to the apricot growing belts of the region and a big menace to apricot growers. Presently, this pest is the most persistent, destructive and difficult pest to control among the insect-pests of apricot fruits. In Ladakh, it is widely infesting the apricot fruits and distributed in all the fruit growing areas of Ladakh. It has been found to infest apricot trees growing in Skurbuchan, Achinathang, Dhomkhar dho, Khaltse, Lamayuru, Tingmosgang, Hemis-shukpachan, Basgo, Saspole and Nimmu area of Leh district and Hanoo, Dah, Bhema, Batalik, Hanoo area of Kargil district.

To avoid and restrain its spread to the neighbouring apple growing areas, specifically in Himachal Pradesh and Kashmir valley, the marketing and supply of apricot produce from Ladakh region is restricted through various quarantine checks. There are many attempts made to control this pest.

Codling moth adults are about 1/2 to 3/4 inch long with mottled gray wings that they hold tent like over their bodies (Fig. 1). Their appearance blends well with most tree bark, making them difficult to detect. If you are trapping the adults, you can distinguish codling moth from other moths by the dark, coppery brown band at the tip of their wings. The larvae are white to light pink “worms” with a dark brown head. They are one of the few caterpillars likely to be found inside apricot, pear or apple fruit in Ladakh. These larvae are embedded with their excreta inside the apricot fruits.

Adult of codling moth start to emerge in the June end. The female moth after mating starts laying tiny, disc-shaped, opaque white transparent eggs singly on the young leaves and sometimes on the fruit, twigs and spurs. The eggs are smaller than a pinhead, disk-shaped, and in colour. The hatching of egg takes place after 7-15 days depending upon temperature and humidity. The newly hatched larvae bore through the fruit surface generally from the blossom or calyx end and feed near the surface for a time before boring. After that larvae bore into deep and feed on pulp and developing seeds until fully grown. Early stage larva being creamy white in colour, which later become light pink. Matured larvae come out from exit hole of the fruit and spin a cocoon in loose bark, cracks or on debris and pupate there in the month of September and emerge as adult moths in May-June. The codling moth overwinters as full-grown larva within cocoon under loose bark, in soils, debris, leaf litter, or any other sheltered place nearby.

Fig. 2 Pupae of codling moth fallen on the ground

Finally completing development the larvae leave the infested fruit and drop from the trees to search out pupation sites and continue the life cycle in the soil or on debris under the tree (Fig. 2) but mostly in Ladakh region pupa are found in nearby soils. Their development mostly depend upon the prevailing temperature, proceeding more rapidly in warmer weather and climates. De­pending on the climate and elevation codling moth can have two, three, and sometimes four generations per year as they have ability to adapt to wide range of climatic conditions and geographical locations. The pupa remain dormant through the winter and are able to withstand severe and freezing temperatures upto -200C. In Ladakh, codling moth has well synchronized its life cycle as per the prevailing conditions of the area.

Codling moth has potential to infest almost all the temperate fruits, however timely control measures has been developed. In Ladakh, apricot starts ripening in the month of July and continue till the mid of September. 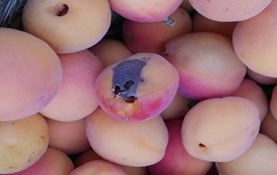 Fig. 3 Red-ringed entry hole on the surface of chulli collected during 16th of August 2017 from apricot orchard

The larvae penetrates into the fruit and tunnel to the core, leaving a small, red-ringed entry hole in the fruit that are filled with reddish-brown, crumbly drop­pings 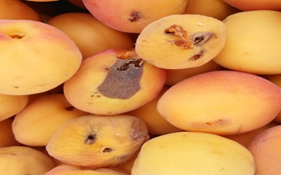 tunnels that codling moth larvae have bored into the apricot fruit.

The infested fruits become shrivelled, smaller in size and thin covered as the larvae feed on the whole pulp, fruits become brown in colour and thin outer fruit skin dries up, and finally drop off pre-maturely. The larvae after feeding escape and start infesting another healthy ripe fruits of apricot. The larvae often infesting 40-90 % of the fruit. If left uncontrolled, larvae can cause huge losses to the apricot grower of Ladakh region. such fruits cannot be consumed and marketed.

The fruit orchards in Ladakh are mostly on slopes there are no well developed orchards of Apricot in Ladakh and the fruit trees are mostly unmanaged. Apricot trees are either planted in combination with Apple or with other poplar trees, and are left un managed, scattered which makes it difficult to execute the control programme efficiently. In addition to enforcement of strict quarantine measures several other measures been suggested to control the pest but not all methods are effective. The chemical control which is the most effective one is not possible there due to unavailability of sufficient proper spectrum of insecticides on timely to the farmer as there is no private pesticide agency and also the pesticides are not preferred by the farmers there due to prohibitive the chemical, toxicity to chemical and limited cultivation of the Apricot trees. Biological control is also not feasible there due to lack of facilities and proper knowledge of the farmers. Through the use of egg parasitoids i.e Trichogramma embryophagum or Trichogramma platneri has been reported to be very effective for the control and useful in eliminating the pest infestation in its early stages of development by the scientists of SKUAST-Leh. Lack of biological control laboratory for mass rearing of the egg parasites is also a big constraint for the biological control of the pest. The only choice left to control it is culture method which seems to be adopted by the farmers nowdays:

Apricot industry in the Ladakh has enough potential for commercialization, if the strategies for the efficient integrated pest management for codling moth carried in a scientific manner. Besides there is urgent need to develop new technologies to control and new resistant varieties need to be developed as apricot is the most potential fruit crop to be grown and can bring revolution in horticulture sector of the Ladakh region. So that ensure food and nutritional security of the people and can boost the income of apricot growers.