Codling Moth of Apple in Cold Arid Regions of Ladakh

Codling moth (Cydiapomonella L) is a member of the lepidopteran family Tortricidae. It is native to Europe and was introduced to northern America, where it has been considered as one of the serious insect-pest of deciduous fruits in almost every apple growing regions of the world. The pest has been reported fromreported from Europe, USA, Canada, South Africa, Australia, New Zealand, Afghanistan and Pakistan (Sheldeshova, 1967).In India this pest is restricted to cold arid region (Ladakh) of Jammu and Kashmir State.This pest is supposed to have entered into Ladakh from the North West frontier province of Pakistan and Afghanistan where it created havoc to the apple orchards of the region and a big menace to the growth and development of apple industry in the area (Janjua et al., 1943 and 1941; Akbar et al., 2013). Presently, this pest is the most persistent, destructive and difficult pest to control among the insect-pests of apple fruits. In Ladakh, it is widely distributed in all the fruit growing areas and has been recorded from Karkitchoo, Mangbore, Hardass, Sainikund, Batalik, Dah, Hanoo area of Kargil district and Lamayuru, Scrubachan,Achinathang, Dhomkhar, Khaltse, Tamisgam, Hemis-shukpachan, Basgo, Saspole and Nimmu area of Leh district. The infestation of codling moth in apple was 49.7 and42.5 per cent in Kargil and Leh district, respectively whereas the infestation on fallen fruit was 69.9 per cent whereas on fruit still on tree it was 27.5 percent (Zaki. 1999). Pawar et al. (1938) has reported thatthe fourlocal varieties of apple grown in Ladakh behaved differently in susceptibility to codling moth attack. However, a number of varieties have been introduced in Ladakh, which showed varying degree of susceptibility to codling moth. Apple is the major host of this pest, however, it also feed on pear, walnut, peach and apricot.To avoid and restrain its spread to the neighboring apple growing areas, specifically in Himachal Pradesh and Kashmir valley, the marketing and supply of apple produce from Ladakh region is restricted through various quarantine checks.

The adult emergence takes place in the month of June. The female moth after mating starts lying eggs singly on the young leaves and some times on the fruit and twigs. The eggs are smaller than a pinhead, disk-shaped, and opaque white transparent in colour. The hatching of egg takes place after 7-15 days depending upon temperature and humidity. The newly hatched larvae bore through the fruit surface generally from the blossom or calyx end and feed near the surface for a time before boring. After that larvae bore into deep and feed on pulp and developing seeds until fully grown. Early stage larva being creamy white in colour, which later become light pink. Matured larvae come out from exit hole of the fruit and spin a cocoon in loose bark, cracks or on debris and may or may not pupate. The codling moth overwinters as full-grown larva within cocoon under loose bark, leaf litter, or any other sheltered place nearby. Pupation takes place during second fortnight of May, which ranges from 10 to 20 days depending upon temperature and other climatic condition. 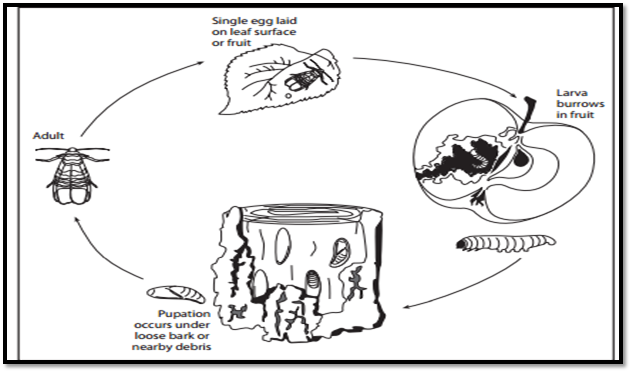 Life cycle of the codling moth .

The pest being a multi-volatile species with facultative diapauses it can complete one to five generations in a year depending upon latitudes and elevation. Codling moth has a remarkable ability to adapt to a wide range of climatic conditions and geographical locations. Codling moth passes the winter as full grown larvae in diapauses (winter resting stage) inside a thick silken cocoon. They usually spin their cocoon under loose bark on the trunks of apple trees, under shelters about the base of the trees, or on the ground nearby. They remain dormant through the winter and are able to withstand severe and freezing temperatures. In mid spring, the larvae change in to pupal stage and adult moths emerge after two to four weeks. In Ladakh, codling moth has well synchronized its life cycle as per the prevailing conditions of the area.

Codling moth has the greatest potential for damage as an apple pest yet it can be effectively controlled with properly timed treatments. It causes different types of fruit damage, sting, deep and calyx entries.

It is reported that the infestation of codling moth in apple was 49.7% and 42.5% in Kargil and Leh districts, respectively. It is estimated that about 60 to 70% loss is being observed in apple industry each year. If left unchecked, the extent of infestation may be up to 90% in apple. Moreover its alternate host in Ladakh is probably the Apricot, which is considered as the basic commercial fruit crop of the region.

In Ladakh the apple orchards are either combined with apricot or scattered which makes it difficult to execute the control programme efficiently. However, several measures have been suggested to control the pest but not all methods are effective. The chemical control which is the most effective one is not possible there due to unavailability of sufficient and proper spectrum of insecticides on timely to the former as there is no private pesticide agency and also the pesticides are not preferred by the farmers there due to prohibitive cost of the chemical, toxicity to chemical and limited cultivation of apple. Biological control is also not feasible there due to lack of training and proper knowledge of the farmers to use it. Through the use of egg parasites, Trichogramma sp. has been reported to be very effective for the control and useful in eliminating the pest infestation in its early stages of development by the scientists of SKUAST. Lack of biological control laboratory for mass rearing of the egg parasites is also a big constraint for the biological control of this pest. And the only choice left to control it is culture method:

A word of caution to the farmers: since the codling moth has been observed to attack the main fruit crop of apricot and Halman cv. It is a preferred host over other varieties, it is essential to watch its status vis-à-vis apricot closely, and eradication of apple plantation should be avoided because that makes apricots more vulnerable to the attack of codling moth.

Conclusion
Apple industry in the cold arid desert region (Ladakh) has enough potential for commercialization, if the strategies for the efficient integrated pest management for codling moth are carried in a scientific manner. Besides there lies a dire need to extend the evolved technologies among the target communities (growers) to provide a breakthrough in the horticulture sector of the region.

About Author / Additional Info:
I am presently pursuing P.hD in fruit science at Division of Fruit Science, Chatha, Jammu