Tillage refers to the mechanical manipulation of the soil with tools and implements so as to create favorable soil conditions for better seed germination and subsequent growth of crops.The word tillage is derived from the Anglo-Saxon words tilian and teolian, meaning to plough and prepare soil for seed to sow, to cultivate and to raise crop.Jethrotull considered as Father of tillage. Conservation tillage is a type of tillage or a modern concept of tillage.

The Conservation Technology Information Center (CTIC) defines Conservation Tillage(CT) is technically as a crop system where at least 30% of the soil is covered with crop residue after planting. These residues protect the soil from erosion, wind and water. The operating principle behind conservation tillage is to minimize the disturbance of the soil. As its name implies, conservation tillage conserves soil by reducing erosion. In the Midwest, erosion by water is the primary concern, whereas western regions of the country are more susceptible to wind erosion. Conventional tillage, such as moldboard plowing, leaves the soil surface bare and loosens soil particles, making them susceptible to the erosive forces of wind and water. Conservation tillage practices reduce erosion by protecting the soil surface and allowing water to infiltrate instead of running off.

FAO describes CT as “ a set of practices that leave crop residues on the surface which increases water infiltration and reduces erosion. It is a practice used in conventional agriculture to reduce the effects of tillage on soil erosion. “

(3) Providing optimum seedbed rather than homogenizing the entire soil surface,

Effects of surface residue cover on runoff and soil loss.

Before adopting a conservation tillage system, first seek advice from:

Conservation tillage effects on water footprint of a crop 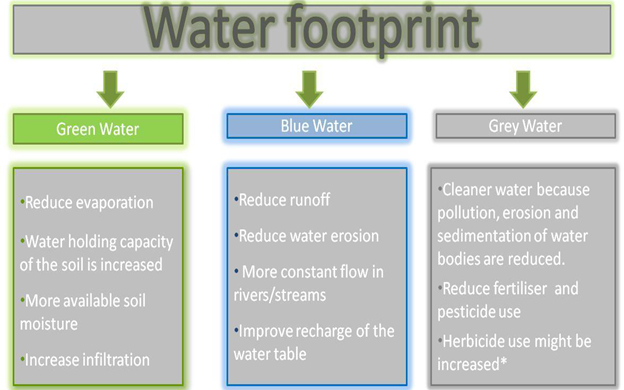 About Author / Additional Info:
I am currently pursuing Ph.D in Plant Physiology from Banaras Hindu University with UGC fellowship