In recent years, conservation agriculture (CA) has emerged as an alternative farming practice for restoration and improvement of soil and environmental health. Reduced tillage practices enhance soil organic carbon (SOC) in the surface soil by minimising soil disturbance, reducing transfer of C from soil to atmosphere over the conventional tillage. SOC is a key component of healthy soil and its maintenance is very important for productivity and long-term stability of agricultural production systems. Management of SOC depends mainly on modifying the input–output relationships i.e., by increasing inputs or decreasing losses, or by a combination of both. Soil organic C and N are very much interrelated and both of they play an important role in maintenance of soil health. Inefficient management of any of these two affects the soil health and productivity adversely, and also leads to climate change. Figure 1 shows the various indicators of soil health that can be improved under conservation agricultural practices. 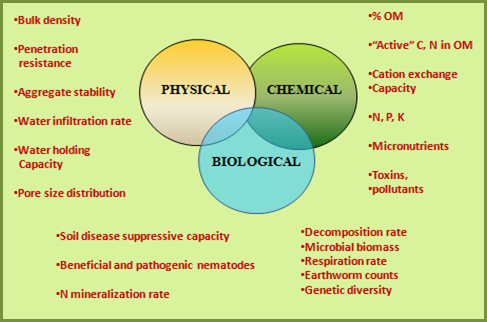 The magnitude of increase in SOC, however, depends on the extent of reduction in tillage (e.g. zero tillage, minimum tillage etc.) and also on the amount of crop residues retained, which in turn depends on the chemical composition of SOM, especially its molecular structure. The CA is believed to have prominent effect on C and N dynamics in soil.

How Conservation agriculture is different from conventional agriculture?

Conservation agriculture is based on three principles i.e., minimal mechanical soil disturbance, permanent organic soil cover, diversification and crop rotation. Globally 124.8 Mha area is under CA of which India contributes about 1.5 Mha only (Bhan and Behera, 2014). 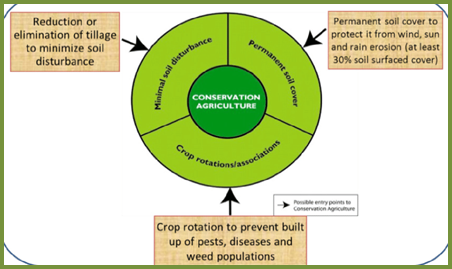 Effect of CA on soil organic carbon and nitrogen

Tillage has been shown to reduce the SOC and increase the emission of greenhouse gases. The labile SOC have rapid turnover rates and are affected by management practices. In CA protecting the soil under cover crops during dry season enhance the SOC contents by 7% over plots with no cover crops. Intensive ploughing broke soil aggregates and increased soil porosity, thus causing a decrease in soil bulk density. Total SOC stocks also increased under zero till, as a result of higher SOC concentrations and bulk density. Yaduvanshi and Sharma (2008) reported significant increase in SOC in zero till plots compared with conventional plots in an alluvial soil of North West-IGP under RW system. 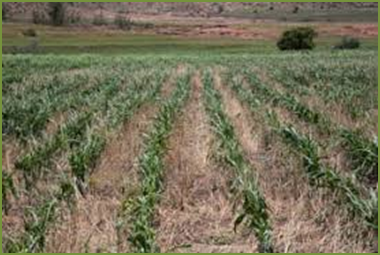 Surface-retained residues under CA decomposed more slowly than soil-incorporated residues, because of greater fluctuations in surface temperature and moisture and reduced availability of nutrients to microbes colonising the surface residue. The CA is reported to have significant effect of zero till, green manuring (Green gram residue retention) and brown manuring (Dhaincha residue retention) on very labile SOC in the 0-15 cm soil layer only. A continuous supply of soil organic matter in terms of fresh residue addition under CA plots enhances the labile SOC pool, when compared with conventional practices.

In conservation agriculture, the zero tillage reduces the disruption of soil macroaggregates and favours the formation of ‘microaggregates within macroaggregates’ which are more stable in nature. This causes higher SOC accumulation. The Continuous supply of crop residues on the soil surface in CA favours cycling of C and formation of macroaggregates. In conventional farming practice, tillage induces the disruption of soil aggregates even when residues are incorporated and increases microbial decomposition which in turn contributed to the low levels of particulate organic matter associated carbon (POM-C). The POM-C generally decreases as the depth increases. Residue retention of Dhaincha or Green gram along with zero tillage further aggravated supply of labile organic matter, which led to subsequent encapsulation of this POM by mineral particles and microbial by-products to form stable aggregates containing young crop-derived C.

Effect of CA on soil microbial biomass carbon and nitrogen

Soil microbial biomass (SMB) comprises about 1–5% (w/w) of the total SOC and plays an important role in decomposition of plant residue to simple C compounds. Positive and significant correlations exist among soil microbial biomass-C (SMB-C), coarse POM-C and C mineralization, which shows changes in SOC due to change in management practices. The SMB-C has been generally greatly affected by tillage and residue management practices with values as high as 232 and 123% in the 0–5 and 5–10 cm soil layers, respectively, under CA compared with CT (Liu et al., 2014). In CT, tillage disrupts fungal mycelium which negatively affects build-up of microbial biomass while in CA conditions are favourable for root growth and improves SMB.

Nitrogen transformation in soil occurs via mineralization and immobilization and availability of soil N is associated with SOM. The CA increases different pools of soil N in surface soils with increasing total SOC. Brown manuring and green manuring when combined with zero tillage increases total soluble nitrogen in an irrigated system under CA. The continuous supply of fresh organic matter increases microbial activity which improves SMB-N along with SMB-C.

Soil inorganic carbon (SIC) can modify nutrient availability in the soil. Tillage and residue management have some interesting effects on SIC. Double ZT and double residue retention in RW systems of calcareous soils of Samastipur, Bihar, India resulted in 10.9% less total SIC compared with CT plots in the surface 0-15 cm layer (Dey, 2016). In CA crop residue retention on soil surface increases the production of secondary metabolites that are acidic in nature and have capacity to solubilize some of the carbonates, thus can decrease total SIC. These carbonates/bi-carbonates can leach down to deeper soil layers and their re-emission to environment is reduced. 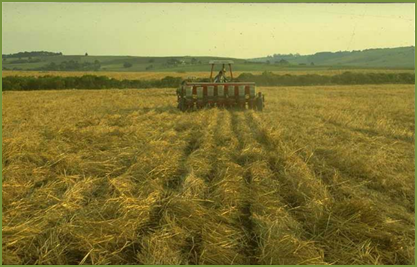 Figure 4: Zero tillage under conservation agriculture can be done even in large farms

Effect of CA on Quality of soil organic matter

Biochemical composition of SOM or we can say molecular structure and functional groups contained within plays an important role in improving nutrient supplies. In general, SOM includes a no. of biomolecules such as carbohydrate, protein, lignin etc. having known structure along with humic substances. Humic substances are complex mixture of physically and chemically similar substances that show a large number of oxygen-containing functional groups, particularly COOH and OH groups. These contribute around 85-90% of total SOM in developed soils, and form a relatively stable pool of SOM which is formed through partial degradation of crop residue and other sources of fresh OM. Humic substances can be classified in to three major categories, fulvic acid (FA), humic acid (HA) and humin. Among these HA is stable and functional groups contained in it shows quality of SOM. The Fourier-Transformed Infrared (FT-IR), nuclear magnetic resonance (NMR) and electron spin resonance (ESR) spectroscopy and determination of total and carboxylic acidity can be used to study humic substances. Alterations in crop establishment, residue management, crop rotation and tillage practices can affect the chemical characteristics of HA. The less mechanical disturbance of soil indicates least maturity, more aliphaticity and primitive stage of humification-condensation. Retention of crop residues, promotes aliphaticity and inhibits humification of HA (Dey, 2016).

In no-till system, ‘fresh’ substrates were always available for soil microorganisms, sometimes in quantities higher than their metabolizing capacity. Thus, the SOM formed was rich in aliphatic compounds with lower percentage of aromatic carbons which represent a less advanced humification stage while in CT humification process of SOM is more with a relative increase in the concentration of more recalcitrant organic compounds.

Effect of CA on crop productivity

In comparison to conventional agriculture, CA can increase or decrease crop yields, depending on various factors such as nature of crops and time under CA practices. The other factors affecting the yield in RW system are water stress in beds at panicle initiation and flowering, lack of suitable varieties, lack of herbicides etc.

Increased net N immobilization by microorganisms due to fresh organic matter in the initial years may also contribute to yield reduction. At least 3-4 years are necessary to observe positive effect of CA in terms of yield. Residue retention also had positive effects on crop productivity due to improved soil water regimes, reduced competition to resources due to lower weed density, improved soil physical properties, better water extraction and aeration, and better C and nutrient accumulation.

About Author / Additional Info:
Dr. Priya Saini is a Scientist in the Division of Soil Science and Agricultural Chemistry, ICAR-Indian Agricultural Research Institute (ICAR-IARI), New Delhi, India since2016. Her area of research interest is Nano technological application in soil and plant research. Dr. Priya Sainicompleted her Ph.D. on "Residues studies of Pyridalyl and its nanoformulation on vegetables" from ICAR-IARI, New Delhi. She is presently working in the area of soil humic acid fractionation and characterization in different land management systems.