Current Status of Vegetables in India

Introduction
India is blessed with diverse agro-climates zones with distinct seasons, making it possible to grow wide range of vegetables. Vegetables are good sources of nutrients, dietary fiber, phytochemicals and vitamins. Vegetables with shorter duration, higher productivity have resulted in greater economic returns to farmers. Vegetables are reported to be rich source of carbohydrates (sweet potato, potato, onion, garlic and methi), proteins (leguminous vegetables, leafy vegetables and garlic), vitamin A (tomato, carrot, drumstick, leafy vegetables), Vitamin B (garlic, tomato and peas), Vitamin C (drumstick leaves, Cole crops, leafy vegetables, green chillies and leaves of radish), minerals (leafy vegetables, drumstick pods). It can be grown throughout the year in different season. It also have medicinal importance especially for persons suffering from heart diseases and diabetes. In addition, it also improve soil health and provide fodder to catties. Per capita availability of vegetables in India is 357 gm/person/day, which helps in fighting malnutrition. It can also be grown in backyard of the house as a kitchen garden. 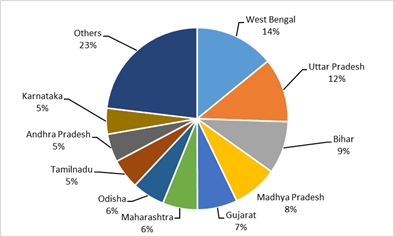 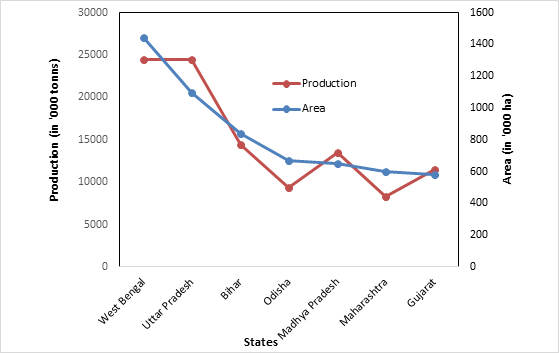 Contribution of Major vegetables
So far 40 kinds of vegetables are being cultivated in India and the major grown vegetables are potato, tomato, onion, brinjal, cabbage, cauliflower, peas, okra, chillies, beans, etc. During 2014-15, potato had the largest share in vegetable production followed by onion, tomato, brinjal, cabbage, cauliflower, peas and others (Fig. 4). Uttar Pradesh (29 %) and West Bengal (26 %) are top potato producing states which together produce more than half of the total potato produced in the country. In tomato production, Andhra Pradesh is leader producer with 18% share followed by MP and Karnataka, each with share of about 11%. In case of Brinjal, Cabbage and Cauliflower, West Bengal was the leading states accounting for about a quarter of total production in country whereas, In case of Onion, Maharashtra was the leading producer with 29% contribution followed by Karnataka and MP each having 16 % share. 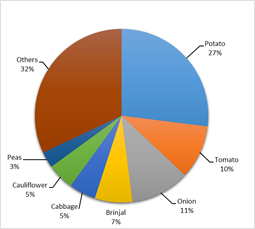 India is the largest producer of Ginger and it also ranks first in okra production ((73% of world production) and second in production of brinjal, potatoes, onions, cauliflowers, Cabbages, tomato etc. During 2015-16, total vegetables exported from India was of INR 4,866.91 crores and the major importers of Indian vegetables are UAE, Bangladesh, Malaysia, Netherland, Sri Lanka, Nepal, UK, Saudi Arabia, Pakistan and Qatar, accounting for around 55% of the total vegetable exports. Between 1991-92 and 2014-15, Vegetable production has been gradually increasing. Table 1 shows the area under production, total production and productivity of vegetable crops of the country in this period. The increase in production mainly due to an increase in area under production and larger increase in productivity with farmersâ€™ positive approach towards vegetable cultivation. During this period, the area under horticulture crops grew by about 2.7 percent per annum, productivity increased by 37 per cent between 2004-05 and 2014- 15. As a result, India has maintained its second rank in the global production of vegetables after china.