Effect of Frost on Fruit Crops and their Management

Over the last four decades, the impact of frost is increasing in mid hills as well as plain areas due to climatic change and deforestation. Tropical and subtropical plants exhibit a distinct physiological damage when they are exposed at low temperatures below 10°C. This is referred to as â€˜chilling injury. It is observed at temperatures below 0°C and is quite distinct from freezing injury. When fruit plants was shown root injury its mean caused by "frost heaving at that condition they are most helpless against frost. Frost damage can be due to extracellular or intercellular freezing. This is mainly associated with physical disorders caused by freezing of water. Common types of damage include: death of dormant flower buds, burning of young leaf dieback of overwintering broad-leaved plants, frost damage to tender shoots, flowers, and mature fruits. Although chilling injury can be induced in complete darkness, it is more marked under weak light. Low temperature in winter, plants tend to harden against freeze and chilling injury, and they lose the hardening after a warm spell. Hardening is most probably related to an increase in solute content or decreases in ice-nucleation active (INA) bacteria concentrations of the plant during winter period. and some time die during peak frost days that is reasons the Production and productivity ultimately low particularly in northern regions in India So that, frost is a momentous risk to many regions in the India. Some fruit crops such as papaya, beal, custard apple, mango and new grafting planting materials are more susceptible when temperature goes below 100 C. Frost damage may have a drastic effect upon the entire plant or affect only a small part of the plant tissue, which kills foliage, tender shoot, twig branch, flowers, and mature fruits, reduces yield, or merely product quality. Frost damage occurs when ice forms inside the plant tissue and injures the plant cells. Thus the fruit growers are hesitant to cultivation of frost susceptible fruit plants. Many fruit crops of tropical and subtropical origin experience physiological damage due to low temperatures. Nevertheless its highest impact on leaf tissue, new and emerges growth in the plants. Understanding the factors that the maximum affect of frost on orchard location, distance plant to plant, age of plant, season of flowers stage are highest susceptible as compared others. The selection of site very inherently any fruit crops to damage or control from frost. Damage not only puts at risk the current seasonâ€™s crop, but also because of the perennial nature of fruit crops, can influence the productivity of several seasons. In wintry weather period the daylight shorter than night time and a low intensity ray as it strikes the earth as compared normal days. However, in winter the clear sunny days do not provided sufficient solar energy to compensate the overnight infrared loss. The effected of fruit plants was defoliation on fruit yield. Redistribution of fruit composition, despite fruit completed damages before fruit maturity and develop fruit quality. Thus temperatures are quite low during night time and get colder night after night, until warm air mass arrives. Frosts which are formed by infrared radiation loss at night are called radiation frosts. Frost injury occurs when ice crystals form on the leaf surface drawing moisture from the leaf tissue. The damage from this dehydration will be less severe if the plant is not already drought-stressed. Although chilling injury can be induced in complete darkness, it is more marked under weak light. Chilling injury in light is regarded as a kind of photo inhibition. Chilling injury can occur under certain distinct characteristics of lower threshold temperature below which it is induced in the plants. Thereafter, visible symptoms develop in the plants after several days of hidden chilling injury. Chilling injury may lead to indirect damage to plants. Theoretically, fruit crop can be protected from frost event, but economic and practical aspects limit the methods to save the large size fruit plants

Frosts divided into two types of advection and radiation

Advection Freeze: When air temperature is often colder than the plant temperature. However, when a large, dry, cold air mass, several thousand feet thick, moves into an area.

Radiation Freeze: A radiation freeze occurs when a dry cold air mass settles in an area when there is small or no wind and an absence of cloud cover during the night. At night, this heat is slowly released to the atmosphere.

Controls
Frost has obvious effect on the agricultural and horticultural crops production, while their greatest impact is on viscous sap types of leaf fruit plants. Frost is common in subtropical areas, but can also occur in Mediterranean and temperate zone However it was observed that first and two years plantation are more susceptible as compared matured plants. Several technique including, selection of site, planting distance, application of irrigation (drip irrigation, sprinkler irrigation flood irrigation and water spray), heat radiators, wind, heat plus wind can used for reducing the effect of frost. However antitranspirants screens and windbreaks can be used to shelter susceptible evergreens. Thatching and Shelterbelts inter row management, or plant cover through low infra- red transparency (e.g. polyvinyl chloride), polyethylene and polypropylene have high infra-red transparency can also provide some protection by reducing the amount of moisture lost by the plant.

• Selection of site is very important when fruit orchard is being established. Site effect on sensitivity to frost the most effective mace against frost protection of fruit crop.

• Planting distance and planning of high density plantation is other important factor to reduce of impact of frost. Selection of variety, culture practices such as canopy management, tree health, and orchard floor management are all factors that have a passive impact on frost susceptibility.

• High density plantation can have a marked influence on the minimum temperature reached in orchard. Ground cover and the thermal properties of the soil, i.e. its thermal conductivity, density and specific heat, can influence air temperatures during radiation frosts in the orchard.

• Irrigation (drip irrigation, sprinkler irrigation flood irrigation and water spray) are all selecting in an active frost control system, choose one that is reliable and easily implement to reduced frost incidence in the orchards and enhance the fruit production.

• Heat radiators, wind, heat plus wind and Artificial fogs are using to reduced frost incidence in fruit orchards. When the dew point is close to air temperature, fog can form. The fog, which requires relatively little water, is produced using micro-sprays in a line across the upwind part of the orchard. Wind carries the fog across the orchard. Little water is deposited, minimizing the potential for ice-load damage.

• Soil moisture measured by gravimetric method in 6.2 percentage and soil characteristics that increase a soilâ€™s heat capacity will influence thermal conductivity and specific heat. Soil profiles with high water content will store heat during the day for release at night.

• Potassium alpha-nathaleneacetate (PNA) significantly retarded bud burst by five days whan applied at 200ppm and 400ppm in the autumn. Application of free water in the soil can serve as the heat sink and release heat to the air reducing a freezes and serves as a nucleator for ice within the bud. Potassium regulation of plant water balance can tolerance of low temperature.

• Low infra- red transparency (e.g. polyvinyl chloride), (polyethylene and polypropylene have high infra-red transparency) Covering plants with material should have used as covering materials to reduced radiation heat loss from the plants. The possibility of using bird protection nets, folded over the vines at a vulnerable time of the year, may be worth investigation.

• Small and grafting plant can be protected through thatching to save the frost. it is very easily and cheap method to control from frost injury . However its depends on the density of the shelterbelt, site slope, thatching materials. It is clear that shelter and thatching are desirable for other crop reasons (prevention of spray drift, wind damage etc.), temporary, artificial

• Shelter cloth, which can be lifted up during the period. 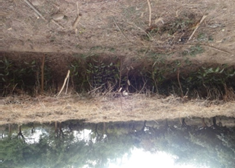 About Author / Additional Info:
I am working in agricultural university ,Jammu and working in Kagzi Lime and Red Flush Guava