Nematodes are triploblastic, bilaterally symmetrical, unsegmented, psuedocoelomate animal. Among vast diversity of nematodes, some have evolved an association with insect pathogenic bacteria. Together the bacteria and nematode are lethal obligatory parasites capable to infect many above ground and subterranean life stages of insect pests. These nematodes are called as 'entomopathogenic nematodes'.

Entomopathogenic nematodes (EPN) are in the species of Heterorhabditis spp. (Heterorhabditidae) and Steinernema spp. (Steinernematidae) symbiotically associated with the bacteria of the genera Photorhabdus and Xenorhabdus (Enterobacteriacae), respectively. These nematodes occur in soil habitats and have been isolated from most regions of the world (Kaya and Gaugler, 1993). EPNs fit nicely into integrated pest management (IPM) programs because they are considered non-toxic to humans, relatively specific to their target pest(s), and can be applied with standard pesticide equipment (Shapiro-Ilan et al. 2006).

In a mass of soil complex, infective juveniles, a free-living stage of EPN penetrate to insect hosts through natural openings (mouth, anus, and spiracles) or directly through the cuticle. After penetration into the hemocoel, each infective juvenile releases the mutualistic bacteria. The symbiotic bacteria release toxins, exoenzymes and other metabolites to kill the insect host within 24 to 48 h after infection. The bacterial symbiont digests the host tissues, thereby providing suitable nutrient and environment for nematode growth and development. 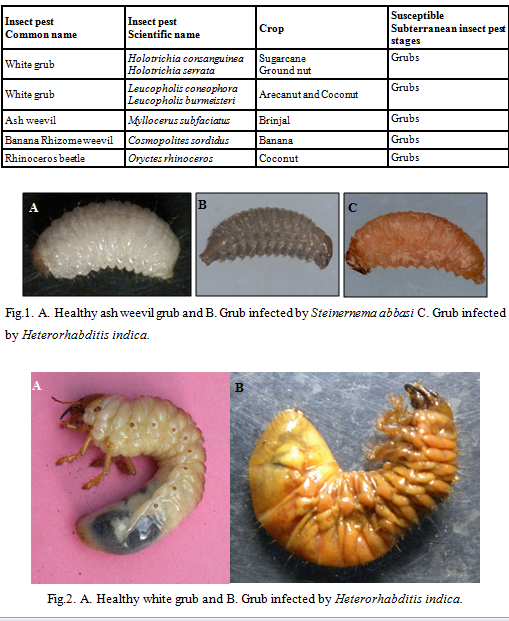 Effect of abiotic factors on efficacy

Entomopathogenic nematodes are extraordinarily versatile in being useful against subterranean insect pests in diverse cropping systems. However, nematodes are constrained by abiotic factors like temperature, moisture, desiccation or ultraviolet light. These factors rapidly inactivate pathogenicity of nematodes and reduced their efficacy when compared with chemical insecticides. On the other hand the use of EPN's based formulations requires additional knowledge on nematode biology, ecology as well as time and method of field applications.

In recent times technological advances in nematode production, formulation, quality control, application timing and delivery and particularly in selecting optimal target habitats and target pests have narrowed the efficacy gap between chemical insecticides and EPNs. In this regard ICAR- National Bureau of Agricultural Insect Resources (NBAIR) Bengaluru developed a technology on novel insecticidal wettable powder (WP) formulations of Heterorhabditis indica for the biological control of white grubs and other soil insect pests. This WP formulation of EPNs is effective for controlling a variety of subterranean life stages of insect pests (Table1), in particular especially true for white grubs. They commercialize the product through technology transfer agreement with many private and public organizations to make available to farmers.