In most species, fruit growth can be represented by a sigmoid curve or a double sigmoid curve with a second burst of growth during the ripening period while kiwi fruit follows a triple sigmoid growth curve. Physiologically and biochemically, fruit development can be divided into four phases. Among them phase-IV constitute the ripening phases which is otherwise known as early phase of senescence. This ripening process render the fruit attractive and palatable. Among the plant hormone, ethylene enhance the ripening process and exhibit a climacteric rise.
1901: Dimitry Neljubov- Ethylene from coal gas
1910- H.H. Cousins- Ethylene is a natural product of plant tissue.
1935: R. Gane- Ethylene is a natural product of plant tissue.

STRUCTURE, BIOSYNTHESIS AND MEASUREMENT OF ETHYLENE

STRUCTURE: Ethylene is the simplest olefin having molecular weight 28KDa. It is lighter than air under physiological conditions and readily undergone oxidation.

Biosynthesis: Ethylene is synthesized by Yang cycle. The amino acid methionine is the precursor of ethylene. The rate limiting step in ethylene biosynthesis is conversion of S-adenosyl-methinine to ACC (1-aminocyclopropane-1carboxylic acid) which is catalysed by the enzyme ACC synthase. The last step in ethylene biosynthesis is the the conversion of ACC to ethylene, require oxygen and this step is catalysed by ACC oxidase. The CH3-S group of methionine is recycled through yang cycle, thus conserved for continued synthesis. 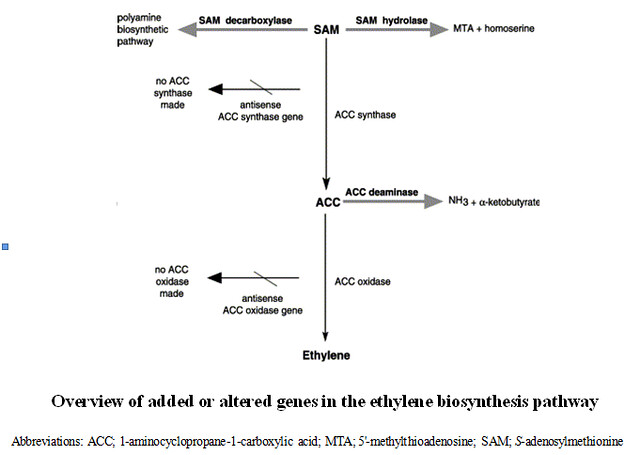 INHIBITORS OF ETHYLENE ACTION: Silver ion ( Ag+) applied as silver thiosulphate are the inhibitors of ethylene action.
• Carbon dioxide at high concentration (5-10%) also inhibit the many action of ethylene such as induction of ripening.
• trans-cyclooctene is the competitive inhibitor of ethylene binding.
• 1-methylcyclopropene (1-MCP) binds irreversibly to the ethylene receptors.

Ethylene absorption: Because ethylene gas is easily lost from its tissue of origin and may effect other tissues or organs, ethylene trapping system is used during the storage of fruits, vegetables and flowers. Potassium permanganate (KMnO4) is an effective absorbant of ethylene.

All fruits that show a spike of ethylene production and exhibit a characteristic ethylene asociated respiratory rise for a limited period called “climacteric” before the ripening phase which enhance the ripening process by triggering certain changes in fruit like conversion of starch in to free sugar, change in pH, development of aroma, degredation of chlorophyll etc. Such fruits are grouped as climetric fruits. Ex- Apples, bananas, avocardos and tomatos.

System 1: which acts on vegetative tissue and in which ethylene inhibits its own biosynthesis.

System 2: which occurs in ripening fruits, in which ethylene stimulate its own biosynthesis.

In contrast, fruits such as citrus fruits and grapes do not exhibit the respiration and ethylene production rise are called non climacteric fruits.


About Author / Additional Info:
Currently, I am in Ph. D student in Plant Physiology. I am working on abiotic stress management.