This term was first introduced in the Japanese literature in 1984, to distinguish a so-called tertiary function of foods, different, so it was said, from the primary function of nutrition and the secondary function of preference(Aronson J.K., 2017). As per oxford English dictionary it is a foodstuff containing chemical or biological additives intended to have beneficial physiological effects on the consumer; a nutraceutical. The vague use of term nutraceutical makes things complicated.

Definition According to health Canada:

Functional food is similar in appearance to, or may be, a conventional food that is consumed as part of a usual diet, and is demonstrated to have physiological benefits and/or reduce the risk of chronic disease beyond basic nutritional functions.

Nutraceutical is ‘a product isolated or purified from foods that is generally sold in medicinal forms not usually associated with food, demonstrated to have a physiological benefit or provide protection against chronic disease’

Current Status of research in this area: 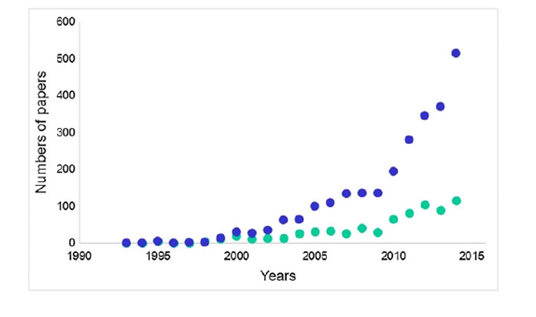 The numbers of research articles being published in this area are increasing at a logarithmic scale. Fig. 1 shows the number of papers in pubmed retrieved by searching for nutraceuticals in papers (blue symbols) or titles (green symbols)

Some Examples Of Functional Foods And Their Key Components: 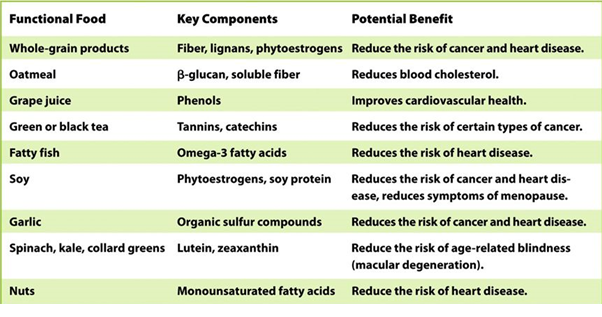 Overwhelming evidence from epidemiological, in vivo, in vitro, and clinical trial data indicates that a plant-based diet can reduce the risk of chronic disease, particularly cancer. In a 1992 review of 200 epidemiological studies showed that cancer risk in people consuming diets high in fruits and vegetables was only one-half that in those consuming few of these foods. It is now clear that there are components in a plant-based diet other than traditional nutrients that can reduce cancer risk.

Health professionals are gradually recognizing the role of phytochemicals in health enhancement, aided in part by the Nutrition Labeling and Education Act of 1990. The NLEA required nutrition labeling for most foods and allowed disease- or health-related messages on food labels.

The majority of these human clinical intervention trials revealed statistically significant reductions in total and LDL-cholesterol in hypercholesterolemic subjects consuming either a typical American diet or a low fat diet. The daily amount of oat bran or oatmeal consumed in the above studies ranged from 34 g to 123 g.

The cholesterol-lowering effect of soy is the most well-documented physiological effect. A 1995 meta-analysis of 38 separate studies (involving 743 subjects) found that the consumption of soy protein resulted in significant reductions in total cholesterol (9.3%), LDL cholesterol (12.9%), and triglycerides (10.5%), with a small but insignificant increase (2.4%) in high density lipoprotein (HDL) cholesterol.

Among the major seed oils, flaxseed oil contains the most (57%) of the omega-3 fatty acid, a-linolenic acid. Recent research, however, has focused more specifically on fiber-associated compounds known as lignans. The two primary mammalian lignans, enterodiol and its oxidation product, enterolactone, are formed in the intestinal tract by bacterial action on plant lignan precursors. Flaxseed is the richest source of mammalian lignan precursors. Because enterodiol and enterolactone are structurally similar to both naturally-occurring and synthetic estrogens, and have been shown to possess weakly estrogenic and antiestrogenic activities, they may play a role in the prevention of estrogendependent cancers. However, there are no epidemiological data and relatively few animal studies to support this hypothesis. In rodents, flaxseed has been shown to decrease tumors of the colon and mammary gland as well as of the lung.

Tomatoes have received significant attention within the last few years because of interest in lycopene, the primary carotenoid found in this fruit, and its role in cancer risk reduction.

In a prospective cohort study of more than 47,000 men, those who consumed tomato products 10 or more times per week had less than one-half the risk of developing advanced prostate cancer. Interestingly, lycopene is the most abundant carotenoid in the prostate gland. Other cancers whose risk has been inversely associated with serum or tissue levels of lycopene include breast, digestive tract, cervix, bladder, and skin and possibly lung.

Garlic (Allium sativum) is likely the herb most widely quoted in the literature for medicinal properties. Thus, its not surprising that garlic has ranked as the second best selling herb in the United States. The purported health benefits of garlic are numerous, including cancer chemopreventive, antibiotic, antihypertensive, and cholesterol-lowering properties.

The characteristic flavor and pungency of garlic are due to an abundance of oil and water-soluble, sulfur-containing elements, which are also likely responsible for the various medicinal effects ascribed to this plant. However, intact, undisturbed bulbs of garlic contain only a few medicinally active components. The intact garlic bulb contains an odorless amino acid, alliin, which is converted enzymatically by allinase into allicin when the garlic cloves are crushed. This latter compound is responsible for the characteristic odor of fresh garlic. Allicin then spontaneously decomposes to form numerous sulfur- containing compounds, some of which have been investigated for their chemopreventive activity.

Broccoli and other Cruciferous Vegetables

Several epidemiological studies have shown that citrus fruits are protective against a variety of human cancers. Although oranges, lemons, limes, and grapefruits are a principal source of such important nutrients as vitamin C, folate, and fiber, another component is responsible for the anticancer activity. Citrus fruits are particularly high in a class of phytochemicals known as the limonoids.

Over the last decade, evidence has been accumulating in support of the cancer preventative effect of limonene. Crowell (1997) showed this compound to be effective against a variety of both spontaneous and chemically- induced rodent tumors. Based on these observations, and because it has little or no toxicity in humans, limonene has been suggested as a good candidate for human clinical chemoprevention trial evaluation. A metabolite of limonene, perrillyl alcohol, is currently undergoing Phase I clinical trials in patients with advanced malignancies.

Cranberry juice has been recognized as efficacious in the treatment of urinary tract infections since 1914, when it was reported that this benzoic acid-rich fruit caused acidification of the urine. Recent investigations have focused on the ability of cranberry juice to inhibit the adherence of Escherichia coli to uroepitheial cells. This phenomenon has been attributed to two compounds: fructose and a nondialyzable polymeric compound. The latter compound, subsequently isolated from cranberry and blueberry juices, was found to inhibit adhesins present on the pili of the surface of certain pathogenic E. coli.

Tea is second only to water as the most widely consumed beverage in the world. A great deal of attention has been directed to the polyphenolic constituents of tea, particularly green tea. Polyphenols comprise up to 30% of the total dry weight of fresh tea leaves. Catechins are the predominant and most significant of all tea polyphenols. The four major green tea catechins are epigallocatechin-3-gallate, epigallocatechin, epicatechin-3-gallate, and epicatechin.

In recent years, there has been a great deal of interest in pharmacological effects of tea. By far, most research on health benefits of tea has focused on its cancer chemopreventive effects, although the epidemiological studies are inconclusive at the present time. In a 1993 review of 100 epidemiological studies approximately 2/3 of the studies found no relationship between tea consumption and cancer risk, while 20 found a positive relationship and only 14 studies found that tea consumption reduced cancer risk.

There is growing evidence that wine, particularly red wine, can reduce the risk of CVD. The link between wine intake and CVD first became apparent in 1979 when St. Leger et al. (1979) found a strong negative correlation between wine intake and death from ischemic heart disease in both men and women from 18 countries. France in particular has a relatively low rate of CVD despite diets high in dairy fat. Although this “French Paradox” can be partly explained by the ability of alcohol to increase HDL cholesterol, more recent investigations have focused on the non-alcohol components of wine, in particular, the flavonoids.

The high phenolic content of red wine, which is about 20-50 times higher than white wine, is due to the incorporation of the grape skins into the fermenting grape juice during production. The black seedless grapes and red wines (i.e., Cabernet Sauvignon and Petite Sirah) contain high concentrations of phenolics: 920, 1800, and 3200 mg/L, respectively, while green Thomson grapes contain only 260 mg/kg phenolics.

Although the benefits of wine consumption on CVD risk reduction seem promising, a recent prospective study of 128,934 adults in Northern California concluded that the benefits of alcohol consumption on coronary risk were not especially associated with red wine. Moreover, a note of caution is in order, as alcoholic beverages of all kinds have been linked to increased risk of several types of cancer, including breast cancer. Moderate wine consumption has also been associated with a decreased risk of age-related macular degeneration.


About Author / Additional Info:
I am pursuing PhD in department of microbiology from Indian Agricultural Research Institute, New Delhi-110012