Introduction
In plants, the α-aminobutyric acid (GABA) shunt was first reported in potato (Solanum tuberosum) tuber. GABA shunt is most likely involved in stress and signalling role. In addition to that GABA metabolism plays a important role in carbon and nitrogen primary metabolism. 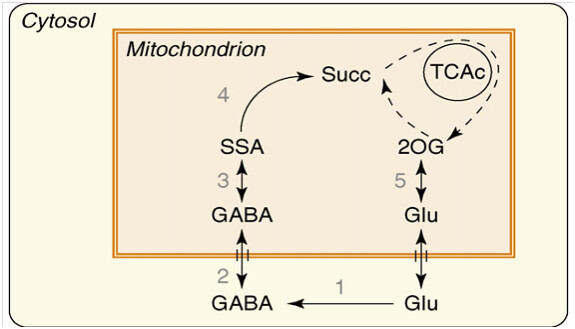 The pathway starts with the decarboxylation of glutamate (Glu) to produce GABA and CO2 in the cytosol. GABA is then presumably transported to the mitochondria by an as yet unidentified GABA transporter, where it is converted to succinic semialdehyde (SSA). Subsequently, SSA is converted either to succinate or 4-hydroxybutyrate (GHB).

• The GABA shunt has been shown to be activated by light, during developmental phases and in an N status-dependent manner, as well as in parallel to other changes that occur in central metabolism during plant growth.

• In plants, the cytosolic decarboxylation of Glu to GABA, catalyzed by GAD, is generally regulated by Ca2+/calmodulin signalling pathways. It has been showed that removal of GAD calmodulin binding domain results in altered GABA metabolism in tobacco.

• GABA transaminase can use either pyruvate or 2- oxoglutarate (2OG) as amino acceptor to catalyze the conversion of GABA to SSA. Use of the former leads to alanine, whereas the latter leads to Glutamate formation and this provide a futile cycle, since at least part of the Gluamate recycled by the transamination of GABA would eventually feed back into the GABA shunt This might serve to maintain the mitochondrial GABA/Glutamate balance.

There is more complexity in TCA cycleâ€"GABA shunt interaction .There are multiple possibilities to bypass the 2OG-to-succinate reaction: (i) the cytosolic conversion of 2OG forming Glu and its subsequent metabolism by the shunt; (ii) the operation of GABA transaminase in the mitochondria and (iii) the direct decarboxylation of 2OG to SSA.

Irrespective of the exact route of this bypass, isotope labelling experiments suggest that the GABA shunt can provide a considerable proportion of the succinate requirement of the mitochondria .

3. Rapid accumulation in response to biotic and abiotic stresses

4. 4-hydroxybutyrate can be polymerized into poly-Beta-hydroxybutyrate, PHB. This storage compound accumulates in rhizobia during the early stages of symbiosis.

5. Under normal growth conditions, Glu is converted into methionine (Met), threonine (Thr), isoleucine (Ile) and lysine (Lys), via the plastidial aspartate (Asp)-family pathway ( Upon stress, the expression of both enzymes Lysâ€"ketoglutarate reductase (LKR) and saccharopine dehydrogenase (SDH), which form the bifunctional polypeptide LKR/SDH involved in the catabolism of Lys, is induced . This enzyme converts Lys back into Glu, which can be reincorporated into the stress-induced metabolic rearrangement.

6. Spermine, spermidine and putrescine are among the most prevalent polyamines in higher plants and contribute to alkaloid biosynthesis. Their catabolism feeds into the GABA pool.


About Author / Additional Info:
Currently, I am a Ph. D student in Plant Physiology. I am working on abiotic stress management.