Irregular bearing at young stage of the plant in all litchi cultivars is a phenomenon constraint in general and alternate bearing in cultivar of China group in particular. This phenomenon is happens in litchi due to failure to bloom, because of the continuous vegetative growth of the tree due to varietal characteristics and climate change effect which is attributed to an insufficient degree of dormancy to initiate flower bud formation. To overcome this problem, a technique to suppress vegetative growth prior to flower induction is litchi has been developed to obtain regular flowering and fruiting in Shahi and China cultivars. Litchi is commercially grown in Bihar, West Bengal, Jharkhand, Tripura, Assam, Uttrakhand, etc. dominated by Shahi and China cultivars. China cultivar of litchi showed the tendency of alternate bearing habit while Shahi considered as regular bearer. But in the changing climate scenario it is showing erratic behavior especially up to an age of 15 years of planting. Bihar is a major litchi growing state occupies an area of 31,000 ha about 44% of total area of the country. China cultivar occupied substantial area (13,000 ha approx) and farmers did not receive assured income every year which resulted into huge economic loss.

Keeping in view the above problem, ICAR-NRC on Litchi scientists have developed a technique of getting regular flowering and fruiting in litchi through girdling of primary branches. This technique has been successfully demonstrated in farmersâ€™ field during 2014-15 in 40 plants of China cultivar. Farmer has harvested very good yield of 85-90 kg quality fruit per plant after adopting the girdling technology as compared to very meager or no fruit in non-girdled tree. Litchi fruits were sold in the market @ Rs. 30-35/ kg and thus handsome income with a tune of Rs. 1,00,000 to 1,25, 000 received by the grower. After seeing the good yield and income other farmers of the nearby village came forward this year to adopt this technology.

Steps followed in the technology as given below:

• Perform the cut around major limbs comprising 1/2 to 2/3 of the total foliage.

• The primary branches of about 10 cm and more in diameter to be selected for girdling purpose.

• Last week of August to first week of September is the ideal time to perform the girdling techniques.

• Girdling should be done by using sharp pruning saw/knife.

• Remove a strip of bark 2-3 mm wide and 3-4 mm depth in a ring around the selected branch.

• The callus development started 18-29 days after girdling and takes 100-120 days for complete healing of wound.

• Subsequent girdling during next year to be performed at least 5-6 cm above the previous girdled portion.

• If tree main trunks has branches into two (bifurcated) then only girdle one of the limbs. Similarly, if the tree has three main limbs (trifurcated), then girdle two of them and likewise four main limbs girdle three of them. 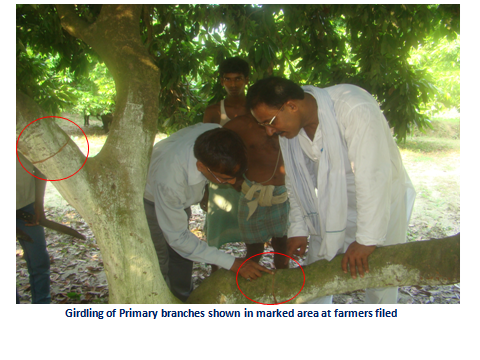 • Always leave one main limb/branch un-girdled otherwise litchi plants may suffer from starving the roots of nutrients, provided by the photosynthesis occurring in the canopy of the tree and die.

• Do not damage the xylem portion of the branch while making girdle.

• Never girdle the base/ trunk of the tree.

• Do not perform late girdling after 2 week of September.

• At the same time in girdle litchi tree should be given higher phosphate content fertilizer which is known to boost bloom apart from balance nitrogen and potassium with FYM.

• After the tree has been girdled be careful to keep herbicides or pesticides from being sprayed into the open wound on the limb as these can be taken up into the foliage and fruit or can even result in the death of the tree.

• Stop irrigation during the winter months (November to January) 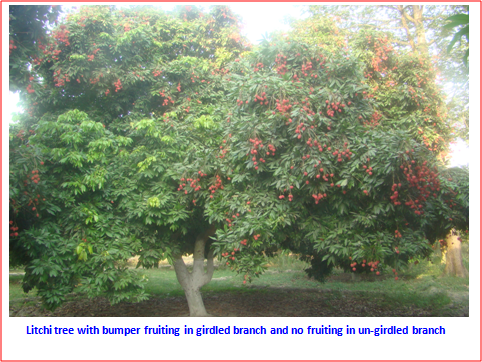 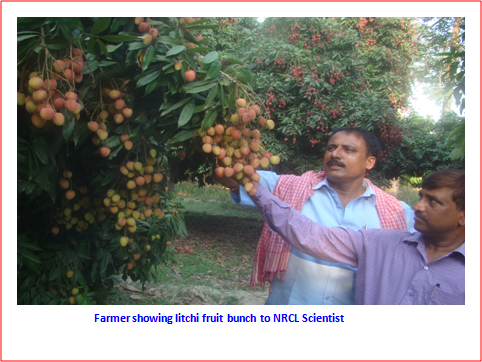 About Author / Additional Info:
I am currently working as research scientist at ICAR-NRC on Litchi on production technology.