Soil macroflora (plant roots) create voids and macropores in the soil so that air and water can move through the soil which affects plant growth by influencing root distribution and the ability to take up water and nutrients. The roots also supply food for microorganisms and burrowing soil fauna that also keep the soil from compaction. Eventually, good physical condition of soi..
Importance of Soil Macroflora in Maintaining Soil Physical Condition

Soil physically supports plants and acts as a reservoir for storing the water and nutrients required by the plants. Soils are complex mixtures of mineral particles of various shape and size; living and dead organic materials including microorganisms, roots, and plant and animal residues; air; and water (Fig. 1). The physical condition of the soil plays a large role in influencing the nature of biological and chemical reactions. Optimum plant growth depends on a favourable physical environment. It includes soil texture, soil structure, soil density, porosity, soil water, soil aeration and soil temperature. The discussion of soil physical environment begins with the sizes (texture) and arrangements (structure) of individual soil particles. These two characteristics intimately affect the pore space between the particles. The pore space is important as the conveyor of water, dissolved mineral nutrients, and air, as well as for providing space in which roots can grow. The soil is teeming with millions of living organisms which make it a living and a dynamic system. These organisms not only help in the improvement of soil physical condition but also carry out a number of transformations, facilitating the availability of nutrients to the plants. Besides improvements of soil physical condition, the organisms are also involved in the following: 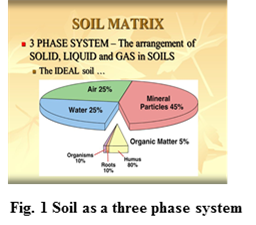 Soil macroflora (plant roots) create voids and macropores in the soil so that air and water can move through the soil. The roots supply food for microorganisms and burrowing soil fauna that also keep the soil from compaction. Bulk density can be increased from 12 to 35% compared with that of the bulk soil due to compressing action of growing root (Young, 1998). However, organic residues left behind by the decaying plants are lighter and less dense than clay, silt, and sand particles decreasing the average soil density (Six et al., 2004).

The compressing action of growing roots decreases soil porosity in the zone between roots and re-orientates clay particles along the root surface. Near the root surfaces, bulk density can be increased from 12 to 35% compared with that of the bulk soil. These modifications occur mostly within a 50â€"200 um zone around the roots (Dorioz et al., 1993), inducing the formation of microaggregates. In contrast, a decrease in macroaggregation after plant growth is partially due to the penetrating effect of roots into macropores. Materechera et al. (1994) found that, even at constant water potentials, roots decreased the proportions of already formed large water stable aggregates by 20â€"50%. However, water stable aggregation increased after air-drying the soil and nullified the disruptive effect of roots. During their study on soybean root morphology in soil with and without tillage pan in lower Mississippi river valley, Keisling et al ., 1995 found that roots were concentrated in areas above or besides compacted zone, but could not penetrate through it. In a nutshell, root penetration decreases the proportion of relatively unstable macroaggregates but increases the proportion of relatively stable microaggregates. However, differences in the root architecture (e.g. degree of branching, thickness of roots, etc.) will determine the overall influence of root penetration on aggregation (Carter et al., 1994). Materechera et al., 1992 found that the highest root length density was in Rye grass having highest bulk density and stability of aggregates (Table 1). This might be due to differences in the rooting densities of the three plant species, because root growth resulted in a slight compaction of soil caused by volume expansion of the roots. The overall influence of root penetration on soil physical condition depends on root mass, root density, size distribution, and root turnover and root length.

Table 1. Different plant species as a function of bulk density and stability of aggregates.

Soil roots also influence aggregation through modifying the soil water status in several ways. First, plant water uptake causes a localized drying of the soil, which promotes the binding of root exudates on clay particles (Reid and Goss, 1982). Second, root exudation reduces the wetting rate by occluding pores or increasing pore tortuosity, thereby reducing slaking of aggregates (Caron et al., 1996). Third, water flows preferentially along living roots due to the presence of a saturated film of water along the roots.

As plant roots release organic material within the rhizosphere (rhizodeposition), they directly and indirectly affect soil physical condition. Mucilages produced by roots may stick soil particles directly together. Root mucilage such as polygalacturonic acid may stabilize aggregates by increasing bond strength (Czarnes et al., 2000). Roots can also alter the ionic and osmotic balance in the rhizosphere through nutrient uptake and rhizodeposition, which can affect aggregation. The degree of influence by roots on soil structure through root exudation is very variable as production and composition of mucilages depend on water regime, plant species, time, soil depth.

4. Dead root decomposition
During the decomposition of dead roots, soil structure will be promoted, resulting in improvement of soil physical condition, by increasing soil microbial activity, then decreasing bulk density, compaction thereby increasing soil porosity, water availability and ultimately, increasing crop productivity. The magnitude of the effect depends on the amount and the decomposability of the material.

The entanglement of particles by roots to form and stabilize macroaggregates has been emphasized in many studies (Tisdall and Oades, 1982; Jastrow et al., 1998). However, it is difficult to separate the influence of entanglement versus exudation by roots. In addition, arbuscular mycorrhizal (AM) fungi are often associated with root systems, further complicating the separation of the effects of roots versus AM fungi and their exudates. Nevertheless, Thomas et al. (1993) tried to separate the influence of AM fungi from soybean roots by using a screen only permeable for hyphae and not for roots. They concluded that both fungi and roots increased aggregation. Rillig et al. (2002b), on the other hand, concluded that the positive effect of roots on aggregation was mainly due to the excretion of a soil protein glomalin by AM fungi. They found an increase in root weights concomitant with a decrease both in macroaggregation and in soil glomalin following an artificial increase of temperature.