Muskdana is an aromatic as well as medicinal plant belongs to Malvaceae family and seed of this plant are the source of the essential oil. An aromatic constituent in seeds are beta-sitosteral and its beta-D-glucoside, myricetin and its glucoside in leaves and petals and beta-sitosterol from dry fruit husk. The tender leaves and shoots are reported to be used in soups and the gr..
Improved Cultivation practices for Muskdana (Abelmoschus moschatus)
Authors: Ashish Kumar* and Jnanesha A C

The botanical name of Muskdana is Abelmoschus moschatus. It belongs to t Malvaceae family. Abelmoschus moschatus is an erect medicinal herb native to India and most commonly known as Latakasturi (Ayurveda), KattuKasturi (Siddha), and Ambrette (English). It is a non-toxic plant with edible leaves, flowers and seeds. The flowers and seeds can be eaten raw. Every part of this medicinal plant is used in one or the other way. Ambrette is an erect, annual herb covered with hispid hair. It grows up to 2meter tall over rich fertile land. Leaves are palmately lobed with long petioles and bear flowers in upper axil of leaves. The petals are yellow with deep purplish spots at the base. The seeds, seed oil and its concrete are traded.

The crop is cultivated in small pockets all over the subtropical tracts in India. Less than 1000 kg ambrette seed oil is produced annually. The main producers are India, Colombia, Ecuador, New Guinea, Northern Australia, Columbia and Brazil. In India, it grows wild all over Deccan and Karnataka in the hilly regions, and at the foothills of Himalaya.

The seed of A. moschatus contains per 100 g: 13-15 g fatty oil and 0.2-0.6% essential oil. The main constituents of the fatty oil are: palmitic acid (20%), oleic acid (20-25%), linoleic acid (50-57%), stearic acid (2.5-4%) and smaller amounts of myristic acid and palmitoleic acid. When ambrette seed is crushed before steam distillation, the odourless, palmitic acid is distilled over together with the aromatic components yielding a crude oil of paste-like consistency. The aromatic components are concentrated in the outer seed coat and distillation of whole seed gives a liquid essential oil, containing only small amounts of fatty oil, but also a lower yield of essential oil.

Muskdana is the source of ambrette seed oil used in luxury perfumery, cosmetic products and as an additive in the preparation of some kinds of chewing tobacco, baked products, sweets, alcoholic (e.g. vermouth and bitters), antihysteric, stimulating and antispasmodic properties and non-alcoholic drinks. Arabs sometimes flavour their coffee with the seed and in India and the leaves and flowers are rubbed on scabies and applied as poultice to swellings, while seeds are also placed between clothes to keep away insects. Seeds are burned as incense and used in making incense sticks (agarbattis). Tender leaves, shoots and pods are occasionally eaten as vegetable. In traditional Vietnamese medicine the plant is used as an antivenin and a diuretic. It is also said to be an aphrodisiac.

In India, muskdana is commercially cultivated as kharif crop in Punjab, Arunachal Pradesh, Nagaland, Tarai areas of Kumaun, Madhya Pradesh, Bihar, Uttar Pradesh, Andhra Pradesh and Telangana. muskdana seed oil is traded in small quantities only and rarely mentioned separately in trade statistics. The cultivation details are given below:

Since it is a hardy plant it grows in a variety of soils in warm, tropical and sub-humid climate. But it prefers well-drained loamy to sandy loam soils of 6.0-8.5 pH of medium fertility.

Muskdana crop requires one ploughing with soil turning plough and two to three cross harrowing with soil pulveriser is essential. Proper leveling is desirable which can be accomplished by planking. The farmyard manure (5-6 tonnes/ha.) is mixed during land preparation.

The crop is raised in kharif season from seed, sown in well-prepared field. Under favorable conditions, germination starts 4-15 days after sowing and is complete after 15-30 days.The optimum temperature for germination is about 30°C. The germination rate of good commercial seed is about 85%. In row planting, thinning is required; in India the spacing followed for Muskdana is 40 cm x 30 cm or 60 cm x 30 cm. 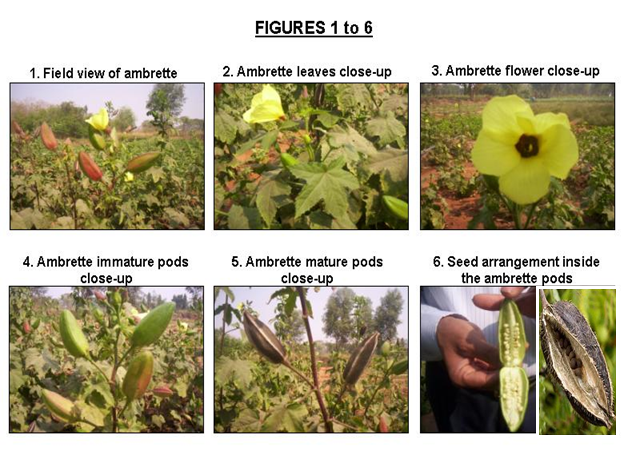 One irrigation is initially required for preparing the land for sowing. It needs 6-7 Irrigation at 20-25 days interval. The Moisture in soil at flower-bud opening stage is essential for higher seed yield.

The crop should be kept weed-free. Two weeding-cum-hoeing are recommended. First weeding is usually done by the end of July. Weeding is done manually till the plants grow big enough to suppress the growth of weeds.

Muskdana suffers from several diseases, the most important being Hibiscus mosaic virus (HMV), anthracnose and leaf spot. Plants infected with HMV should be uprooted and destroyed as there is no other effective control. Anthracnose, caused by Colletotrichumhibisci, affects all plant parts and may start in the seedling stage. Seed treatment and spraying with fungicides, e.g. Bordeaux mixture/ Carbendeziun, can control the disease. Alternaria leaf spot and Phytophthora leaf blight can cause damage, the latter especially under humid conditions. Seed treatment can reduce losses. In India, spotted bollworm (Earias insulana) attacks the crop during vegetative growth. A. moschatus is highly resistant to the cotton jassid (Empoa scabiguttula) which attacks Abelmoschus manihot and A. esculentus. Although A. moschatus is reproductively incompatible with the other 2 cultivated Abelmoschus species, tissue and protoplast fusion techniques may be useful for transferring the resistance.

Muskdana crop, fruit sets continuously from October to March.Harvesting starts when most pods begin to turn from green to brown and just start to open. Pods are picked when three-quarters of their body has turned blackish-brown; the seed is removed manually. Picking is an hardy task as the plants, including the pods, possess hairs that cause itching. In India harvesting has often stopped by the end of March, as later harvesting rounds yield too little to be economical. The seeds also have to be shade dried up to the desired moisture level before storage.

Average seed yield obtained in India is 0.8-1 t/ha. With proper agriculture practices, seed yield can be increased up to 1.2-1.5 t/ha.
Economics

1. Muskdana is more economical crop especially in dry land areas with less input and less management practices and gave benefit cost ratio of 1:2.5 and have greater demand and seed is extensively used in coffee and unripe pods, leaves and new shoots are eaten as vegetables. It is used externally to relieve spasms of the digestive tract, cramps, poor circulation and aching joints. It is also considered an insecticide and an aphrodisiac. Used as a substitute for animal musk. In industry the root mucilage provides sizing for paper; tobacco is sometimes flavored with the flowers. Essential oil is used in perfumery. In view of its increasing demand and depleting wild resources, there is an urgent need to take up systematic cultivation of muskdana. References: 1. L.P.A. Oyen and Nguyen Xuan Dung (Editors). 1999. Plant Resourcesof South-East Asia No 19 Essential Oil Production, Backhuys Publishers, Leiden; pp-53-57.