Grape is an important commercial fruit crop in India. It is plagued by several pests, which cause considerable damage to this economically important crop. Among them, the stem borer is the most serious. Earlier, this pest was considered to be a problem only in old and neglected vineyards. However, in recent years, severe incidence of this pest has been observed in even one year..
Insect pest management of grapevine stem borer and stem girdler
Authors: Neelesh Raypuriya1*, Narayan Lal2 and Govind Shiurkar3
1Ph.D. Scholar, Department of Entomology, JNKVV, Jabalpur (M.P.) India
2&3 Ph.D. Scholar, Department of Horticulture, JNKVV, Jabalpur (M.P.) India
*Corresponding author email: neeleshrai87@gmail.com

Introduction:
Grape is an important commercial fruit crop in India. It is plagued by several pests, which cause considerable damage to this economically important crop. Among them, the stem borer is the most serious. Earlier, this pest was considered to be a problem only in old and neglected vineyards. However, in recent years, severe incidence of this pest has been observed in even one year old gardens.

Grapevine Stem Borer: Coelosterna scabrator, Cerambycidae; Coleoptera
The grub of which bores in to stem and branches and causes drying and withering of affected branches. Initially reddish sap oozes from wounds, chewed particles of wood are seen on the ground just below the site of damage. The adult beetles start emerging from the vines during July to September by making a round hole on the vine. Female beetles make conspicuous slits on the bark of the trunk and arms of the vine.

Identification of the pest:

An adult beetle is about 4 cm long and dull yellow with minute spots. Capsule shaped eggs are laid singly in each of the slits and the slits are covered with a hard gummy substance. Newly hatched flat-headed cream coloured grubs burrow into the trunk or arms and feed inside and make them hollow. They remain inside the vine up to May. Thereafter, they pupate inside the tunnel made in the vine. Adult borers are dark brown beetles, cylindrical in shape with a pronotum that is wider near the head than the posterior end. Females are about 0.7 inch long; adult males are smaller, about 0.3 to 0.4 inch long. Larvae have white bodies that are typically curved in a C-shape and enlarged at the anterior end; the head is brown. Branch and twig borers have one generation per year. Adult emergence starts in March and continues through April. Larvae spend up to 10 months in tunnels they excavate.

Nature of Damage:
Presence of saw dust like substance under the vine indicates the damage done by the grub. Damaged vines get weakened and growth gets affected. The maturity of berries is also delayed which ultimately affects the grape production in terms of both yield and quality 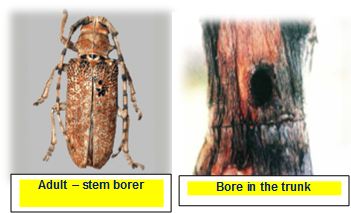 Management:
Hand picking of adults during July to September. Destruction of eggs or first instar grubs in the slits during July - September by removing the slit portion with the help of a sharp knife. Removal of loose bark in pre monsoon period, later painting bark with lindane suspension is recommended. Applying dichlorvos in the holes and closing it with mud or placing half tablet of alumunium phosphide in to the hole and closing it. Spraying of endosulfan 0.07 per cent in 2ml of water to kill adults in case of severe infestation.

Grapevine stem girdler: Sthenias grisator, Cerambycidae; Coleoptera
Besides grapevine, this insect also infests apple, citrus, mango. The adult beetles girdle around the main stem 15 cm above the ground level at night. During the day the adults hide on the lower side of the leaves or under the forking of the branches, but actively move about at night avoiding the light.

Identification of the pest:
Adult is a medium sized, stout beetle, grey coloured with a white spot in the center of each elytra.
Grub - Head is dark brown colour, pair of strong mandibles. The emerging grub tunnels in to the wood and completes its life cycle within the stem. Pupation takes place within the tunnel.

Nature of damage:
Adult beetle girdles (ringing) the vine as a pre-ovipositional operation resulting in drying up of regions beyond the Cut. The adult beetle lays eggs in the girdled portion. After the hatching of the eggs the grubs tunnel into the dry wood. Girdling results in considerable damage to the plant.

Management:
Remove loose bark at the time of pruning to prevent egg laying. Collect and destroy damaged plant parts. Swab trunk with carbaryl 50 WP 2g/ lit. A piece of cloth is soaked in an insecticide solution like chlorpyrifos and then wrapped around the stem. Spray application of any of the following insecticides: Phosalone 35 EC 0.07% or quinalphos 25 EC 0.05% carbaryl 50 WP 0.1%, first round immediately after pruning and repeat it 2-3 times.

Conclusion:
Grape is injured by several pests which cause considerable damage to this economically important crop. The grape vine stem borer is a borer, the grub of which bores in to stem and branches and causes drying and withering of affected branches. Adult stem gridler beetle girdles (ringing) the vine as a pre-ovipositional operation is resulting in drying up of regions beyond the cut. Regular monitoring is necessary to detect early infestations of insect pests and also to adopt proper control measures.


About Author / Additional Info:
I am Ph.D. Scholar in the Department of Entomology, JNKVV, Jabalpur (MP) India. I am working on the efficacy of Entomopathogenic fungus (Metarhizium anisopliae) on insect.