Integrated Nutrient Management for Improvement of Yield and Quality of Vegetables

In tropical Asia, vegetables are an integral part of the diets of many people, providing the essential micronutrients vital to human health and development. In vegetable production, India is the second largest producer next only to China with an annual production of 162 million t from 9.2 (2011-12) million ha of land. However, per capita consumption of these is very low. Integrated nutrient use has assumed great significance in recent years in vegetable production, for two reasons. Firstly, the need for continued increases in per hectare yields of vegetables requires that applications of nutrients increase. Secondly, the results of a large number of experiments on manures and fertilizers conducted in several countries reveal that neither chemical fertilizers alone, nor organic sources used exclusively, can sustain the productivity of soils under highly intensive cropping systems. Agriculture and health are related in many ways. Malnutrition, often caused by the lack of micronutrients affects vulnerable groups. Vegetables are a significant source of phenolic antioxidants, as phenolic acids and flavonoids, in the diet. The concept of dietary fibre content in some vegetables has attracted global attention and the nutritional benefits of dietary fibre (protection against certain types of cancer, regulation of transit, lowering of blood cholesterol etc.) are now well accepted. Therefore, nutritional management of vegetables using both organic and inorganic sources of nutrients are needed to produce some value added vegetables for improving nutritional quality of human diet.

Fertilization for improving quality of vegetables
Crop quality is affected directly and indirectly by fertilization. Direct benefits relate to the function of essential nutrients in the plant itself and how they affect crop growth. Indirect effects include factors beyond direct nutritional benefits such as how a plant resists disease and insect pressures. Both direct and indirect effects can have major impacts on ultimate crop quality.
Direct nutritional benefits of fertilizer vary according to the specific nutrient. For example:


• Nitrogen (N) is a component of protein. Therefore, forages and grain must be adequately fertilized with N or protein content will be low. Nitrogen is also part of the chlorophyll molecule that gives plants green color. Deficient N results in pale (yellowish) leafy vegetables.

• Potassium (K) is involved in many processes within the plant as a catalyst. It does not become part of any compound, but plays a role in carbohydrate formation and translocation. Both carbohydrate and protein production are enhanced with adequate K.

• Sulfur (S) is a component of two amino acids, cysteine and methionine. It, therefore, directly affects the amount and quality of protein produced. It also is a constituent of certain aromatic compounds giving plants such as garlic and onions their distinctive odors.

• Magnesium (Mg) is part of the chlorophyll molecule. So, as with N, Mg deficiency produces chlorotic vegetation, reducing quality of any crop where green color is a measure of quality.

• Calcium (Ca) plays a role in cell wall structure and stability. Deficiency symptoms such as bitter pit of apples and brown center and hollow heart of potatoes are related to Ca deficiency.

• Micronutrients serve a variety of functions in the plant, mostly related to catalyzing metabolic reactions. Deficiencies, therefore, can interrupt numerous processes and result in abnormal growth and development, leading to poor quality.

Direct nutritional benefits of fertilization are generally well documented and frequently obvious. When deficient, many nutrients produce characteristic plant symptoms that are quite diagnostic. There are exceptions. Deficiencies of P are often not as clear-cut as N and K. Alfalfa, for example, can be seriously P deficient (i.e. greater than 10 percent yield loss) and appear relatively normal. The leaves may be a bit small and overall color tending towards dark green or blue-green. The most obvious symptom of a problem may be thinning stand and weed encroachment. Weeds are an indirect effect of P deficiency, leading to lower quality hay.

Indirect nutrient effects can impact crop quality in a number of ways. The importance of balanced nutrition to increasing resistance to pests and their resultant damage is widely recognized. A healthy, well-nourished crop resists pest damage better than one that lacks some essential elements.

Effect of nitrogen sources indicated that application of poultry manure increased the total yield of broccoli (Table 1). On the contrary, the lowest total yield of broccoli was recorded by 50% cattle manure and mineral fertilizer. The increase in the total yield resulting by organic manuring may be attributed to that organic manuring enhanced soil aggregation, soil aeration and increasing water holding capacity and offers good environmental conditions for the root system of broccoli plants. In addition, organic manures are slow release nutrients all over the growth season. Poultry manures are rich in its nitrogen and nutrients content. These favourable conditions creates better nutrients absorption and favours the growth and development of root system which in true reflects better vegetative growth, photosynthetic activity and dry matter accumulation. 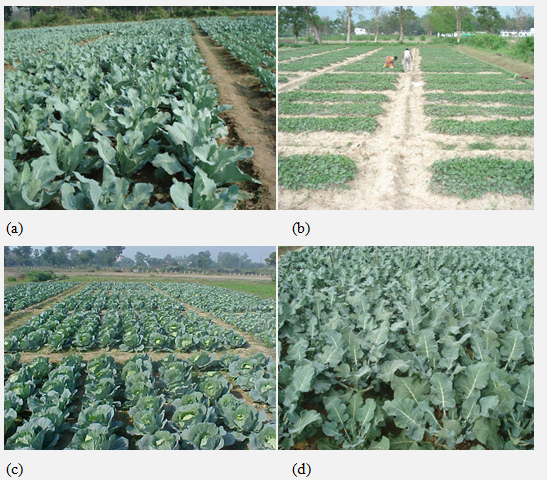 The vegetable is very important for human diet. The people of Asian continents especially Indian having more than 70 percent rural population depends on vegetable for their nutrition. Vegetables are rich sources of vitamins and minerals with different functions in human health. Organically grown vegetables contained higher vitamins and minerals compared to conventionally grown vegetables. Quality of vegetables depends on different properties of soils, fertilizers and handling methods for their international market. Vegetable production during the 21st century will continue its focus on quality traits, and capitalize on the growing demand for the unique health functionality of vegetable crops.


About Author / Additional Info:
WORKING AS A SCIENTIST IN ICAR-IARI