India accounts for only 2.4 % of worldâ€™s geographical area and 4 % of its water resources, but has to support about 17 % of the worldâ€™s human population and 15 % of the livestock. Agriculture being the principal source of livelihood and income for more than 58% of its population. Agriculture not only provides bulk of wage goods required by non-agriculture sectors but also most of the raw materials are derived from it for the industries sector. The combined efforts of Central Government, State Governments and the farming community have succeeded in achieving record production of 244.78 million tonnes of food grains during 2010-11. This record production had been achieved through effective transfer of latest crop production technologies to farmers under various crop development schemes which being implemented by the Department of Agriculture & Cooperation backed by remunerative prices for various crops through enhanced minimum support prices. The Agriculture and Allied Sector is estimated to contribute approximately 13.9% of Indiaâ€™s GDP (at constant 2004- 05 prices) during 2011-12 as per advance estimate released by CSO on 07.02.2012 (Annual report 2012-13).The agriculture in India is heavily dependent on monsoons and has hence been an inherently risky activity. The agriculture system in India is too varied because of different geographical zones. The fertile Northern plain of India is irrigated by Indus, the Ganga-Jamuna river systems, eastern by Brahmaputra and Southern regions have its own history of sophisticated water management systems: perhaps among the most developed historically (Mohan R, 2004).

The agriculture Credit which is utilized to procure needed inputs has to play role in strengthening livelihoods, generating new options and increasing confidence, self-image and status in society for marginalized families (Almelu, 2005).Credit capitalizes farmers to undertake new investments or to adopt new technologies. Credit importance is further reinforced by the unique role of Indian agriculture in the macroeconomic framework along with its significant role in poverty alleviation (Anjani et al 2010). Indian from the past had a very traditional rural tax system which has been developed as a consequence of seasonal needs and fluctuations in order to facilitate smoothing of consumption pattern of farmers over the year. But with the intermittent failure of monsoons and continuous fluctuations of farming, rural indebtedness has been a serious and continuous characteristic of Indian agriculture (Mohan R, 2004).

The rural credit market appears to be confronted with a paradox. Singh (2003) stated that at present about two-third of the credit need in rural areas is met out by informal sources, of finance, mainly local money lenders, landlords, traders, etc., which charge very high rate of interest, varying between 36 to 3,000 per cent per annum. They provide timely and adequate credit to rural poor without much paperwork and for any purpose, especially for meeting consumption and other social needs. But physical, economic and social exploitation of the poor people is attached with this system.

Figure 1: Source of credit to agriculture sector (in per cent) 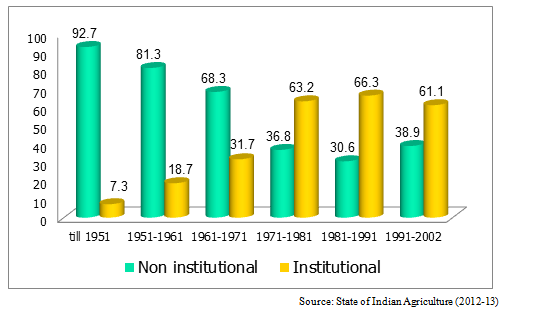 Recognizing the importance of agricultural credit to achieve higher growth rate and productivity in agriculture through adoption of new agricultural technology requires intensive use of inputs and package of practices. Seeing the agricultural growth, GOI realizes the importance of enhancement of flow of credit to the rural sector and reduction of the dependence of farmers on non-institutional sources of credit. Several initiatives have been taken to strengthen the institutional mechanism of rural credit system. The main objective of these initiatives was to improve farmersâ€™ access to institutional credit. These initiatives had a positive impact on the flow of agricultural credit. However, the inadequacy of credit to agriculture is often a hotly debated topic in India. The persistence of money lenders in the rural credit market is still a major concern.

Table -1 Agricultural credit released by the institutional sector (in Crores)

-Kisan Credit Card (KCC) Scheme
The Kisan Credit Card has emerged as an innovative credit delivery mechanism to meet the production credit requirements of the farmers in a timely and hassle-free manner. The scheme is under implementation in the entire country by the vast institutional credit framework involving Commercial Banks, RRBs and Cooperatives has received wide acceptability amongst bankers and farmers. However, during the last 13 years of implementation, many impediments were encountered by policy makers, implementing banks and the farmers in the implementation of the scheme. Recommendations of various Committees appointed by GOI and studies conducted by NABARD also corroborate this fact.

The target group or beneficiaries of the scheme include the Farmers â€" Individuals / Joint borrowers who are owner cultivators, tenant Farmers, Oral Lessees & Share Croppers. It also provide loan to SHGs or Joint Liability Groups of Farmers including tenant farmers, share croppers etc. Kisan Credit Card Scheme aims at providing adequate and timely credit support from the banking system under a single window to the farmers for their cultivation & other needs as indicated below (RBI, 2012)

a. To meet the short term credit requirements for cultivation of crops
b. To encounter the post-harvest expenses and to produce marketing loan
c. For consumption requirements of farmer household
d. As a working capital for maintenance of farm assets and activities allied to agriculture, like dairy animals, inland fishery etc.
e. As an investment credit requirement for agriculture and allied activities like pump sets, sprayers, dairy animals etc.

a. The short term component of the KCC limit is in the nature of revolving cash credit facility. There should be no restriction in number of debits and credits.
b. The credit card facility hasprovision of providing a pass book cum cardto eligible farmers.
c. Limit to be fixed on the basis of operational land holding, cropping pattern and scale of finance.
d. Operations through branches and by using Cheque facility
e. Operations through Business Correspondents and ultra-thin branches
f. Withdrawal through ATM / Debit cards
g. Card valid for 3 to 5 years subject to annual review. As incentive for good performance, credit limits could
h. Be enhanced to take care of increase in costs, change in cropping pattern, etc.
i. Repayment within a maximum period of 12 months.
j. Security, margin, rate of interest, etc. as per RBI norms.
k. Operations may be through issuing branch or through other designated branches at the discretion of bank.
l. Crop loans disbursed under KCC Scheme for notified crops are covered under National Crop Insurance Scheme.
m. Operation through PoS available in Sugar Mills/ Contract farming companies, etc., especially for tie- up advances
n. Operations through PoS available with input dealers
o. Mobile based transfer transactions at agricultural input dealers and mandies

Validity/Renewal of the credit card

Banks may determine the validity period of KCC and its periodic review. The review may result in continuation of the facility, enhancement of the limit or cancellation of the limit / withdrawal of the facility, depending upon increase in cropping area / pattern and performance of the borrower. When the bank has granted extension and/or re-schedulement of the period of repayment on account of natural calamities affecting the farmer, the period for reckoning the status of operations as satisfactory or otherwise would get extended together with the extended amount of limit. When the proposed extension is beyond one crop season, the aggregate of debits for which extension is granted is to be transferred to a separate term loan account with stipulation for repayment in instalments (RBI, 2012).

Benefits of Kisan Credit Card Scheme to the farmers

i. Access to adequate and timely hassle free credit to farmers.
ii. Full year's credit requirement of the borrower for production and consumption can be taken care
iii. It has simplified the documentation load of bank and farmer too.
iv. Flexibility to draw cash at any time and buy inputs as per need of the farmer and also to repay as and when surplus fund is available.
v. Assured availability of credit at any time enabling reduced interest burden for the farmer from non-institutional lenders.
vi. Sanction of the facility for 3 years subject to annual review and satisfactory operations and provision for enhancement.
vii. Reduction in cost of credit for availing the bank loan,
viii. Insurance cover (NAIS/PAIS) at a very low premium rate.
ix. Interest Subvention/Incentive for prompt repayment as advised by Government of India and / or State Governments. The bankers will make the farmers aware of this facility.
x. The KCC holder should have the option to take benefit of Crop Insurance, Assets Insurance, Personal Accident Insurance Scheme (PAIS), and Health Insurance (wherever product is available and have premium paid through his KCC account). Necessary premium will have to be paid on the basis of agreed ratio between bank and farmer to the insurance companies from KCC accounts. Farmer beneficiaries should be made aware of the insurance cover available and their consent is to be obtained, at the application stage itself.
xi. One time documentation at the time of first availment and thereafter simple declaration (about crops raised / proposed) by farmer from the second year onwards.

Benefits of Kisan Credit Card Scheme to the Banks

i. Reduction in work load for branch staff by avoidance of repeat appraisal and processing of loan papers under
ii. KCC Scheme
iii. Improvement in recycling of funds and better recovery of loans.
iv. Reduction in transaction cost to the banks.
v. Better Banker - Client relationships.

Headway path of KCC in India

Table -2 Agricultural credit released by the institutional sector (in Million)

1. Strength: Increasing availability, flexibility and security in the flow of credit to the farmers. KCC is quite efficient especially when it comes to the fulfilment of the short term production credit requirements 01 all size groups. Farmers are getting benefited from KCC through practicing debt management. Amount of credit sanctioned towards marginal and small farmers are more as compared to large farmers and these are increasing interactions between bankers and borrowers in a bid to make the scheme more popular.

2. Weaknesses: The scheme is facilitating access to only short term credit needs 01 the farmers. There is requirement of land records to ascertain cultivation rights. Lack up gradation of land records, small land holding and illiteracy of borrowers are some of the other problems hindering the progress. Farmers were unaware of the personal accident Insurance cover available under the KCC. There are too many Intermediaries in obtaining the suitable securities in this KCC scheme.

3. Opportunities: A personal insurance package is proposed to be extended to KCC holders covering them against risk of their life. As per the cultivation requirements of the crop, the loan amount is disbursed in cash as well as kind (for fertilizers, pesticides etc).

4. Threat: So far as rural banking system is concerned, at present there is no such direct threat to the KCC holders. Though the problems of NPAs (non-performing assets) may handicap the KCC scheme.


Future intervention in the scheme

Mobile enabled Kisan Credit Card (M-KCC): The mobile enabled Kisan Credit Card (m-KCC), was launched as a pilot project in Villupuram district in TamilNadu on 2nd October 2011. It covers farmers having KCC accounts with the Pallavan Grama Bank (PGB), a RRB sponsored by the Indian Bank. The project enables farmers to transact on their loan accounts with PGB by using their mobile phones as an interface. The project will cover 5,000 KCC account holders in 3 years.

Agricultural credit has played a vital role in supporting agricultural production in India. The Green Revolution characterised by a greater use of inputs like fertilizers, seeds and other inputs, increased credit requirements which were provided by the agricultural financial institutions. Though the outreach and the amount of agricultural credit have increased over the years, several weaknesses have crept in which have affected the viability and sustainability of these institutions. Kisan Credit Card has emerged as an innovative and indispensable credit delivery mechanism to meet the credit needs of farmers in a timely and hassle free manner. Right from its inception the farmers are enjoying the embedded advantages. However some serious efforts has to be made to include vulnerable groups who are still deprived of such facilities so as to make them financially inclusive and achieve Inclusive Growth.


About Author / Additional Info:
I am currently working as Assistant Professor in the University