Deﬁcit in cellular water is a pervasive issue confronting both aquatic and terrestrial organisms. Subfreezing temperatures, desiccating conditions in xeric climates, and the osmotic variation seen in aqueous habitats are common environmental conditions that can impose severe water stress and a threat to life. Plants are continuously exposed to various abiotic stress such as drought, salinity and low or high temperature. Subfreezing temperatures, desiccating conditions and the osmotic variation are common environmental conditions that impose severe water stress- a threat to life (Yancey PH., 2005). Plants produce an array of proteins as a part of the global response to protect the cell metabolism when they grow under conditions like drought and salinity generating reduced water potential. Hydration is a major driving force in the protein folding process, compensating for the reduction of the conformational entropy of the polypeptide chain. Therefore, water loss brings about serious consequences. In addition to protein aggregation, stressed cells must contend with oxidative stress, changes in membrane ﬂuidity and cytoplasmic viscosity and damaged DNA. Consequently, cells react defensively by initiating several signal transduction pathways that result in the accumulation of different transcripts, proteins, sugar molecules and lipophilic anti-oxidants, almost always concomitant with increased ABA levels.

Late embryogenesis abundant (LEA) proteins are extremely hydrophilic proteins that were identified for the first time in land plants. Intracellular accumulation is tightly correlated with acquisition of dessication tolerance. As the name suggests LEA proteins are formed during late period of seed development, comprising up to 4% of the cellular protein (Roberts, J. K., 1993). They are also found in the seedlings, roots and other organs. LEA proteins accumulate at the onset of seed desiccation and in response to water deficit in vegetative plant tissues, first identified by Dure and Croud in developing cotton seeds. LEA proteins have also been reported to be present in seedlings, roots and other organs. In plants, LEA proteins are localized in the cytoplasm, nucleus, mitochondria, ER, Peroxisomes, and Plasma membrane.Based on the amino acid sequence, LEA proteins are basically divided into five groups, Group 1-5. Most of the LEA proteins belong to “hydrophillins” family, a group of highly hydrophilic intrinsically unstructured proteins characterized by a biased amino acid composition enriched in Glycine (Garay et al., 2000). The extraordinary feature of LEA proteins is their ability to increase secondary (predominantly α- helix) structure during drying. These proteins are shown to be unstructured in solution, while they fold into α helices upon drying. (Hundertmark et al.,2012). 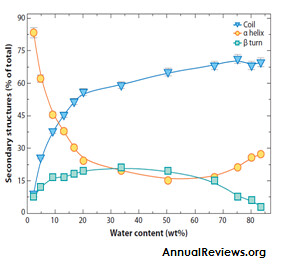 LEA protein expression in terms of time course starts from the late period of maturation and initiation period of drying reaches its peak in dehydration. Various factors and conditions influence LEA protein gene expression, among which ABA is considered the most important, especially in reducing the harm caused by drought and is connected directly or indirectly with other regulatory circuits (Bo et al., 2003).

LEA proteins have the capacity to protect target proteins from inactivation and aggregation during water stress, including both freezing and drying. Protection against freezing damage has been extensively studied for group LEA proteins. Reyes et al., showed that group2 LEA proteins can protect lactate dehydrogenase against both drying and freezing, and because the details of the enzyme inactivation appear to be different, these LEA proteins may be capable of protecting against multiple forms of structural alteration.

The first evidence that LEA proteins interact with membranes came from COR15a from Arabidopsis. COR15a seems able to protect membranes from undergoing detrimental phase transitions during freezing. Although not classified as a LEA protein at the time, it was later identified as a group 3 LEA protein. Membrane interaction has been shown for many other plant LEA proteins, but the function of these interactions is not clear.

LEA plant proteins can stabilize vitrified sugarglasses (trehalose, sucrose), as judged by shifts in the glass-transition temperature (Tg). Vitrification is thought to be one important property for substantial dehydration tolerance.

A sugar glass is "an amorphous metastable state that resembles a solid, brittle material, but with retention of the disorder and physical properties of a liquid. In a glass state, the rates of molecular diffusion and chemical reactions are greatly reduced."

Exciting studies now show that LEA proteins are a component in the arsenal of defense mechanisms utilized by many plants that survive severe water stress. Suggested roles of LEA proteins in plants include the protection of proteins through chaperone activity and/or molecular shielding, interaction with and stabilization of phospholipid membranes, and reinforcement of vitrified sugar glasses. Most LEA proteins are highly hydrophilic and intrinsically unstructured in aqueous solution. One extraordinary feature of LEA proteins is their ability to increase secondary (predominantly a-helix) structure during drying. This feature suggests important functional differences for LEA proteins in the dried state. As folding of LEA proteins occurs during water removal, the number of intra protein hydrogen bonds increases, and the number of hydrogen bonds between the protein and solvent decreases. Estimates of overall protein stability show that LEA proteins are more stable at low water percentages and display greater structural flexibility in aqueous conditions.