Litchi Based Land Use Technique for Low lying areas


Introduction
Agriculture prosperity in India is evidenced by almost fivefold increase in food production after independence. This needs to be enhanced further to cope up with increasing demand of population and that too in the wake of challenges like climate change, degradation of land and water resources, shrinking of land and scarcity of water for agriculture. Majority of the farmers in India are small and marginal. They often follow a monoculture approach which leads to low farm income from agriculture/horticulture/aquaculture to run their families. Presently, most of the farmers are concentrating mainly on crop production, which is subjected to a high degree of risk and uncertainty in income due to crop failure by various factors. It is imperative to evolve a self-sustainable system in existing land use system utilizing the available natural resources through more refined and holistic manner that can assure the income and employment generation round the year. A judicious mix of horticulture and aquaculture based cropping system with associated enterprises more so condition suited to low lying/wet land conditions and socio economic conditions of the farmers would bring prosperity to the farmer. Substantial area under wastelands -waterlogged and marshy land is available and remains unutilized or partially utilized for agricultural purpose. The major problems associated with this wasteland are poor drainage and water accumulates only due to high rains during monsoon months resulting in crop failure in cultivated field. Some parts of Bihar remain waterlogged (> 1m surface water logging) for 4-5 months and become unproductive during kharif and very low utilization in rabi season too. Restoration of such lands is possible through integration of various techniques of land treatment (land shaping) horticulture and fisheries and makes them possible for use to cultivate short and long duration fruit crops, vegetables along with other enterprises in order to diversify monoculture. Land shaping technique includes modification of the surface of the land primarily for harvesting rain water for creating source for irrigation, reducing drainage congestion and growing of multiple and diversified crops round the year and efficient use of stored water.

Litchi based cropping on ridges and furrows system
Development of litchi based land use technique through ridges and furrow system in low lying area mixed with fruits (banana & papaya) on ridges and other seasonal crops and aquaculture in furrows system under optimum management conditions can be useful for rehabilitation of waterlogged soil on long-term basis to ensure nutritional security, economic sustainability, and employment generation.

Mustard, faba bean and maize crops have been cultivated in sunken beds of low lying area in Rabi season. Faba bean, maize and mustard crops grown under PS I produced better yield than the crops grown in other sunken bed of PS II and PS III. The highest cob yield was recorded in maize (170.0 q/ha). However, faba bean yield varied from 13.5-15 q/ha and mustard yield from 16-18 q/ha. 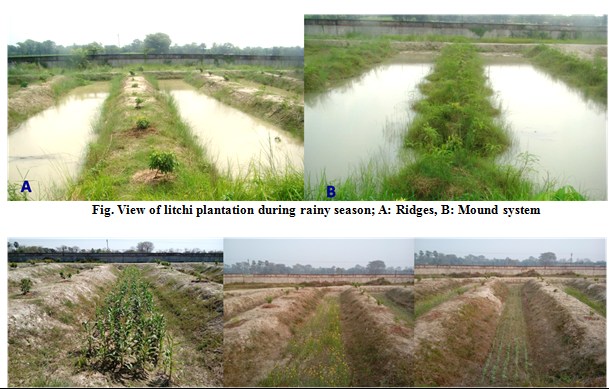 
Apprehension: Almost double income can be ensured by integrating fisheries and horticulture through ridge and furrow system on time scale.

Conclusion
Location specific judicious integration of horticultural and seasonal crops with aquaculture based cropping system including resource conservation and their optimum utilization under low land conditions would bring prosperity to the farmer. Besides, restoration of cultivable waste land (low land) through land shaping techniques (making of pond, ridge& furrow, mound system) made possible for integration of various enterprises in order to diversify monoculture and create employment opportunities.