Brinjal is an important vegetable crop grown throughout the world. Among the biotic constraints little leaf of brinjal (BLL) is a serious disease causing significant yield loss. This article emphasized about BLL disease, its symptoms and management practices...
Little Leaf: A Menace to Brinjal Cultivation
Authors: Shweta Kumari1, Nagendran K1, Rai A B1, Singh B1 and G P Rao2
1Working as a Research Scientist at ICAR-IIVR, Varanasi.
2Working as a Research Scientist at ICAR-IARI, New Delhi.

Brinjal (Solanum melongena L.), also known as eggplant, is an important vegetable crop which belongs to the family solanaceae, grown throughout the world. It is adopted by most of the small-scale and marginal farmers. It is perennial but grown commercially and annual crop in all parts of the country. It is often called as the â€˜King of Vegetablesâ€™. It is also a good source of fibre, vitamins B and vitamins C, phosphorus, folate and calcium. Brinjal being a hardy crop, grow well even under drought conditions are prone to attack from a number of biotic and abiotic stresses. Among the major biotic constraints, little leaf of brinjal poses a serious disease because capable of causing yield loss up to 40 per cent. The BLL disease is transmitted by insect-vectors leaf hoppers (Hishimonas phycitis and Empoasca devastans) and grafting. However little information is available on the brinjal little leaf disease (BLL). This article briefly discuss the management practices of BLL disease.

India is the worldâ€™s second largest brinjal producer after China accounting for 26 per cent of the total world total production. It is grown in an area of 0.71 million hectares with the productivity of 19.1 t/ha. Brinjal cultivation is estimated to cover about 7.6% vegetable area with a contribution of 8.3% to total vegetable production in India. Major brinjal growing states in India are West Bengal (contributing 30% of total production), Orissa (20%), and Gujarat and Bihar (together 10% each). 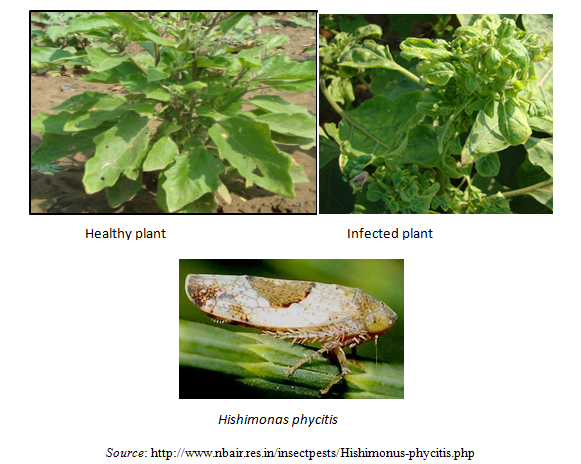 Incidence of BLL is however, increasing in recent years and likely to be a threat to brinjal cultivation. Thomas and Krishnaswamy (1939) for the first time reported natural occurrence of BLL disease in India. The presence of several weeds such as Datura inoxia D. stramonium, Cannabis sativa subsp sativa, Portulaca oleracea and Portulaca grandiflora which serve as alternative hosts for brinjal phytoplasma (BLL) in India which plays an important role in spread Disease. Phytoplasmas associated with brinjal were artificially transmitted through the parasitic plant dodder (Cuscuta sp.) from infected to healthy plants or through grafting the scion from diseased plants on the healthy root stock. In India, BLL is known to be transmitted by the leafhoppers, Hishimonas phycitis and Empoasca devastans under natural condition. Hishimonas phycitis transmit brinjal phytoplasma with minimum acquisition access periods of 3 day followed by inoculation access periods of 7 day. Transmission efficiency of the vector was high on young seedling. Which also play important role in multiplication of insect vector.

Developing management strategy for the management of phytoplasma diseases in brinjal is found to be difficult. Hence integrated strategies includes different components such as cultural, chemical, biological, and induced resistance will be an efficient tool for its management.

• Use of seed material harvested from disease free plant.
• Severity of the disease can be reduced by adopting sanitary measures such as, early removal and destruction of infected crops infested by leafhopper and eradication of volunteer plants from a previous planting.
• Rouging of infected plants should be adopted to avoid further spread of the disease.
• Adjust time of planting to check the insect vector population.
• Mulching may reduce the insect vectors population thereby disease spread can be checked.
• Use of chemical insecticides such as imidacloprid (0.5-0.75ml/l), thiamethoxam (0.5g/lit), acetamiprid (0.5/lit) and fipronil (1.5ml/l) will significantly reduce vector population
• Plants sprayed with 50 ppm gibberellic acid will show recovery of the infected plant.
• Plants treated with antibiotic as a foliar spray will reduce symptom appearance.
• Application of kaolin clay may reduce vector population.

BLL is a major problem in all brinjal growing regions which causes severe yield loss. Hence, screening and identification of plants which is resistant to BLL disease needs attention for the effective management of the diseases. Till then for the management of BLL disease should focus on the clean propagating materials, vector controls and eradication of weeds hots.