Minor Millets - Potential to Save the Poor from Starvation

Millets are small grained nutritious cereals once grown commonly but now their cultivation has declined drastically.These ancient grains are now increasingly being rediscovered as 'quality health food' capable of safeguarding our food and nutritional security, besides enhancing the livelihood of poor farmers around the globe...
Minor millets - Neglected crops having the potential to save the poor from starvation
Author: Sheikh M. Sultan
ICAR-NBPGR Regional Station Srinagar (Jammu and Kashmir) - 190007
e-mail: sheikhmsultan@gmail.com

The term millet refers to a diverse group of annual grasses belonging to the family Gramineae (Poaceae) mainly found in the arid and semiarid regions of the world.These grasses producing small seeded grains are often cultivated as cereals in harsh environments where other crops fail to grow or yield poorly.They often grow with limited water resources and usually without any fertilizers or other input.They are often referred to as ‘coarse grain’ and ‘poor peoples’ crops.The husked grain of millets have a slightly nutty flavor and can be eaten whole after roasting or after cooking or boiling like rice.The seeds are very small and can be yellow, white, gray or red.Millet flour is used for making mush, porridge, flat bread or chapatti.The flour is also used for making wine or beer.The grains can be used in a variety of other ways - from dumplings to a rice replacement, from a salad topping to a great treat in cookies.The grain is also used as animal feed.The green plant is used as forage, but the quality of the straw is poor.

There are two categories of millets based on seed size - Major millets and Minor millets.Pearl millet (Pennisetum sps.) commonly called as ‘bajra’ and broom-corn (Sorghum bicolor) commonly called as ‘jowar’ in India are the major millets while minor millets are represented by at least six species such as finger millet (Eleusine coracana), Japanese barnyard millet (Echinochloa frumentacea), common or proso millet ( Panicum miliaceum), and foxtail millet (Setaria italica ).Pearl millet is the most widely grown of all millets.

In the past minor millets were traditionally cultivated widely and abundantly in India and Africa.However, their cultivation and production has declined drastically during last five or six decades not only in these areas but throughout the world as well.Millet farming has been abandoned at countless places in favor of monocultures of high yielding varieties of select crops.However, nowadays these ancient grains are being increasingly rediscovered as quality health foods containing several health promoting ingredients, fast becoming a popular baby food as the grains are rich in calcium and have a pleasant flavor.The grains are gluten-free and often contain lower carbohydrate content than rice, corn or wheat.The protein content is very close to that of wheat, but in addition they are also rich in B-vitamins, especially niacin, B6 and iron, potassium, magnesium and zinc.Minor millets unlike wheat being gluten free are not well suited for bread making.But due to absence of gluten, these are appropriate food for those with coelic disease or other forms of allergies or wheat intolerance.Given the unabated worldwide obesity problems caused by the consumption of fat rich and high calorie diet that promote high glycaemic indices and high blood cholesterol levels which, in turn, foster heart disease, hypertension, stroke, diabetes and cancer, there is an increasing need for low glycaemic index foods (Brunori et al. 2011).The Glycaemic Index (GI) ranks foods based on their overall effect on blood glucose levels.Foods derived from minor millets are slowly absorbed thus preventing overeating and producing only small fluctuations in our blood glucose and insulin levels and therefore have a low rating.Choosing low GI foods is important for those with diabetes because these foods can help even out blood glucose levels.They can also reduce the risk of heart disease.

Corn, wheat and rice comprise almost 90% of worldwide cereal production and minor millets account for less than 1% of the food grains produced in the world today (FAO).Thus they are not important in terms of world food production, but they are essential as food crops in their respective agro-ecosystems.They are mostly grown in marginal areas or under agricultural conditions where major cereals fail to give sustainable yields.Since much of millet farming is ecological and can grow even in difficult fallow land strips, it generates a unique phenomenon called 'uncultivated foods' which shore up the food and nutritional security for the poor.They are the ultimate crops which stands up in the present crisis of climate change.

In the state of Jammu and Kashmir, like in other parts of the country and world following minor millets were commonly cultivated in different areas but have now been restricted to some limited pockets only: 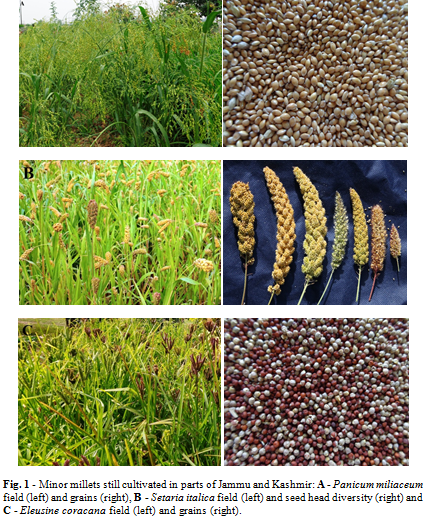 Panicum miliaceum L. (Family: Gramineae) also called as common millet or proso millet (‘cheena’ in India) is an important minor millet grown in India.It is an erect annual grass which tillers profusely ( Fig. 1A).The plants grow up to a height of 45–100 cm.Stem is slender and nodes are distinctly swollen.Leaves are linear and leaf sheath encloses the entire internode.Inflorescence is much branched panicle without bristles, having spikelets at tips of the branches, usually last or the fourth glume encloses a perfect flower which sets grain.Glume and palea are firmly attached to the grain.Seeds are small 2–3 mm and can be cream, yellow, orange-red or brown in color.

In the state of Jammu and Kashmir Panicum miliaceum (local ‘‘ping’’ or ‘‘china’’) was cultivated widely in past in rainfed drylands.Its cultivation has now been abandoned in the state excepting at some places in Ladakh province where it is grown mainly as fodder and is locally called as ‘tchay tchay’.

Common millet is the earliest dry farming crop domesticated in East Asia some 10,000 years ago, and it then spread extensively over the entire Eurasia.Proso was an ancient Slavic name for common millet used in Russia, former Czechoslovakia, Slovenia and Poland.It has also been called hog millet, Russian millet and brown millet.It is believed to have been domesticated in central and eastern Asia and because of its ability to mature quickly, nomads often grew it.It was also grown in Europe, parts of the Mediterranean region, the Balkans, Caucasus and Turkey.Common millet has one of the lowest water requirements of any cereal and can be grown on the poorest of soils.

Setaria italica (L.) P. Beauvois (Family: Gramineae) commonly called as foxtail millet (‘kakun’ in India) is one of the most widely cultivated species of millets.It has the longest history of cultivation among millets, grown in China since sometime in 6th millennium BC.It is an annual grass with slender and erect stem growing to a height of 90–150 cm and bends down with weight of seed-heads (Fig. 1B).Leaves are narrow about 30–45 cm long.The inflorescence is dense, cylindrical and bristly panicle 8–32 cm long often arching towards the tip.There are 1–4 bristles at the base of each spikelet.The seeds are small around 2 mm in diameter and are enclosed in a hard inner glume and its palea.Seed color varies greatly between varieties often creamy white to orange red and even purple.

Foxtail millet is also known as Italian, German, Hungarian or Siberian millet.It is believed to have been one of the five sacred plants of ancient China.

Setaria italica (local ‘‘shol’’ or ‘‘kangni’’) was more commonly cultivated than Panicum miliaceum in Jammu and Kashmir, and sown as substitute for paddy, when it was apparent from snowless mountain peaks that water availability will not be adequate for cultivation of latter.In Ladakh province of the state, it is still cultivated and is locally known as ‘tcha’.

Eleusine coracana (L.) Gaertn. (Family: Graminae) commonly called as finger millet (‘ragi’ in India) is the most important small millet in the tropics and is cultivated in several countries in Africa and Asia predominantly as a staple food grain.The plant which is tolerant to drought carries several spikes of ‘fingers’ at the top of the stem (Fig. 1C).The grains of finger millet which are 1-2 mm in diameter contain valuable amino acid called methionine, which is lacking in the diets of hundreds of millions of the poor who live on starchy staples (Tadele, 2009).

The cultivation of finger millet has also been abandoned in the state excepting at some far flung places in Ladakh province and in Kishtwar district of Jammu province where it is grown on small scale to be used on some religious occasions and is locally known as ‘mandua’.

Nowadays, the large-scale cultivation and consumption of millets is restricted to only certain countries in Southeast Asia, Western Africa and Eastern Europe.During our exploration and germplasm collection programmes in the state of Jammu and Kashmir we have collected several accessions of these crops and conserved them in National Gene Bank at ICAR-NBPGR, New Delhi for future use.We have noted that farmers are increasingly losing interest in traditional crops in general and millets in particular (Sultan and Omvir, 2013).Expansion of horticulture, introduction of high yielding varieties and cash crops together with change in food habit may be some of the reasons for their decreased popularity drastically narrowed down which may be deleterious especially under the prevailing uncertain climate conditions.It is the time to revive these ancient grains and add back diversity in our agricultural systems.These short duration low input small cereals have the ability to produce acceptable yields even under harsh environments and are not easily affected by storage pests.Minor millets are definitely capable of safeguarding our food and nutritional security, besides enhancing the livelihood of poor farmers around the globe.