Agro-advisory service providers need to develop specific, appropriate, and timely content and update of information as often as necessary. Creation of help lines to provide customized solutions and enable feedback from farmers also help in sustaining technology. The information delivery must be led by demand driven rather than supply driven. However, even when all that is done,..
Mobile based SMS Services for Dairy Farmers
Authors: Dr. H R Meena, A. K. Sharma and A. P.Verma

The successful uptake of mobile phone throughout the developing countries has significantly impacted the economic development initiatives. Governments, private organization and non-profit organizations are all examining the possibilities for using this new means of communicating with farmers-producer. As per TRAI data of May, 2014, though there are about 38 crore mobile-based telephone connections in rural areas, internet penetration in the countryside is still abysmally low (in single digit percentage). Therefore, mobile messaging is the most effective tool so far having pervasive outreach to nearly 8.93 crore farm families. Considering that not more than 30% of rural India is mobile-enabled and few have access to the Internet, the trend clearly indicate that our rural mobile users are comfortable with voice, text, sound, pictures and videos. The targetable mobile phone users also have phones without Internet connectivity which increasingly used in rural areas of India to disseminate daily prices of agricultural commodities. By allowing communication at distance, mobile phones allow users to overcome limits of time and space. The first SMS (Short Message Service) was sent on 3 December 1992 (The Times of India, 2002). SMS is widely used to spread information from individual to individual. However, especially in the developing countries, organizations and governments are increasingly using SMS to reach rural populations that could not previously be contacted. To bridge the information gap between the farmers-producer and to build productive and competitive market, different ICT based interventions should be utilized to strengthen their capacities and it also help in restructuring markets in order to make it more efficient and productive.

Why Mobile based services?


The mobile based projects for farmers-producer have objectives which benefit farmers, based on development agenda. These objectives have orientation for market (input, output) prices, availability status, agricultural extension, social connectivity and finally financial support systems. The projects become a source of knowledge and information transfer for farmers from agriculture scientists/extension functionaries and markets through mobiles. A working paper by Mittal et al. (2010) found that the quality of information, its timeliness, and trustworthiness are the three important features that can enable farmers to use mobile-enabled agricultural information effectively. The Indian study found that while mobiles are currently being used in ways that contribute to farm productivity, are not being used to their full potential. Swapan Kumar Dutta, Deputy Director General (crop science) of Indian Council of Agricultural Research, says this service can create alertness about crops that require less water if they get a wind of the monsoon pattern in advance. It’s easier for them to play a larger role as they are in direct touch with rural subscribers. Service providers also need to collaborate more with agriculture scientists.

During celebrations 85th ICAR Foundation Day, Honable President of India launched a SMS Portal for farmers created by Department of Agriculture & Cooperation, (now it is department of agriculture and farmers welfare) Government of India on 16.07.2013. The State Governments and their field formations down to the block level (including State Agriculture Universities and KVKs) also have come forward in a big way to use this integrated Portal. Considering availability of more than 33 crore mobile connections in the rural area, Kisaan SMS Portal is likely to be very useful to farmers and all other stake-holders as timely and relevant information will be provided to farmers in their own language. Search facility (by text and by topic) for going through previous advisories has also been created to avoid duplication and contradiction in advisories. Common Service Centre’s set up by the Department of Electronics and Information Technology and Kisaan Call Centre’s are also being integrated to improve access to such web based information. SMSs to be sent to the farmers can be broadly classified into three categories, viz. information, services and advisories. The content may include information about the schemes advisories from the experts, market have been grouped based on the state, district, block and the crops/activities selected by a farmer. The system is capable of sending messages in regional languages also. The farmers can register to this service by calling Kisaan Call Center on the toll free number 1800-180-1551 or through the web portal. Farmer can give up to 8 choices for his preferred crops/activities. Animal Husbandry, Fisheries & Dairying in addition to Agriculture & Horticulture. The language choice of the farmer is also being taken based on which the language of the SMS is decided. If the mobile of the farmer does not support the regional language, option is given to receive the SMS in regional language written in Roman Script. Provision for sending Voice messages will also be started in due course for the farmers who are not familiar with SMS. Existing farmer databases of farmers available to Central as well as State Governments are being integrated with the Portal which has also been linked with the Kisaan Call Centre. 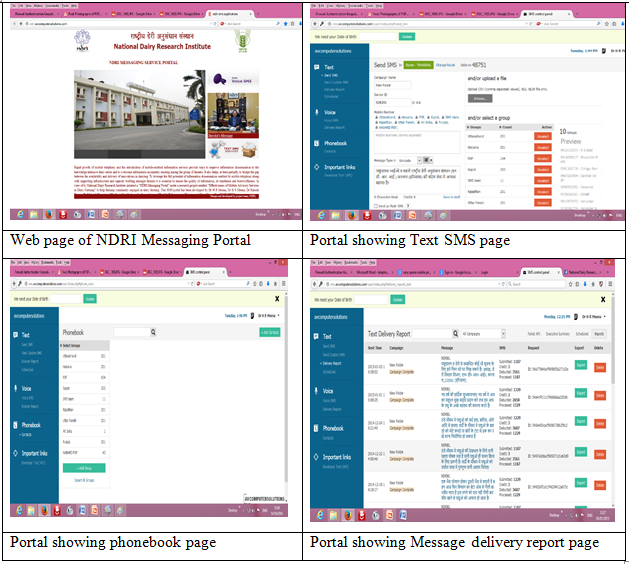 There have been experiments in technology dissemination using ICT but the mobile applications recently started can revolutionalize the information reach to the resource poor small farmers on real time basis. The content development for different clientele groups in different languages is a challenge but voice messages give an easy option for delivery and its understanding by users in case of most of the handsets. Text messages in different languages may be a limitation on some of the handsets. The cost of voice messages is higher which may be brought down with technology development. CIMMYTâ€™s agricultural economist Surabhi Mittal and IRRIâ€™s economist Mamta Mehar argued that institutional and infrastructural constraints do not allow farmers to take full advantage of this technology. In India, agro-advisory service providers use text and voice messaging along with various mobile phone-based applications to provide information about weather, market prices, policies, government schemes, and new technologies. Some service providers, such as IKSL, have reached more than 1.3 million farmers across 18 states of India. But what is the real impact of such services? Are messages available at the right time? Do they create awareness? Do they strengthen farmersâ€™ capability to make informed decisions? Are they relevant to his or her farming context? Mittal and Mehar say that there is still a long way to go. While farmers get information through their mobile phones, it is often general information irrespective of their location and crops, which is information they cannot effectively utilize. In 2011, CIMMYT conducted a survey with 1,200 farmers in Indo-Gangetic Plains and revealed that farmersâ€™ needed information on how to address pest attacks and what varieties better adapt to changing climatic conditions. Instead, they received standard prescriptions on input use and general seed varietal recommendations. Sustainability is another problem since such agro-advisory projects require continued financial assistance; when money runs out, the project ends and the people are again left without information, feeling cheated and without trust for any similar project that may come in the future. The main beneficiaries of the mobile phone revolution are the ones with skills and infrastructure, and the poor are thus left even further behind.