This article presents importance of Morinda citrifolia L. as a useful medicinal and nutritive fruit plant. . It is distributed in coastal areas in open lands and in forests of dry tracts of India viz. Andaman and Nicobar Islands, Karnataka, Tamil Nadu and along the coastal areas of Kerala and many other places as well as to other tropical countries of Asia, South America and C..
Morinda citrifolia L.: A potential medicinal and nutritive fruit plant
Authors: Lalit Arya, Manjusha Verma
Sr. Scientists, NBPGR, Pusa Campus, New Delhi-12


Morinda citrifolia L. (origin: India and South East Asia, Mortan, 1992) belongs to genus Morinda [derived from two Latin words Morus (Mulberry) and indicus (Indian)] and is a member of family Rubiaceae. Morinda citrifolia, commonly known as Indian noni or Indian Mulberry is a fruit plant (3-10 m tall, with broad elliptical leaves, small tubular white flowers, ovoid and fleshy fruits, ranges in color from green to yellow to almost white at the time of picking and pulp is juicy and bitter, seeds reddish brown, triangular shaped and, with an air sac making the seeds buoyant) of immense importance. It is distributed in coastal areas in open lands and in forests of dry tracts of India viz. Andaman and Nicobar Islands, Karnataka, Tamil Nadu and along the coastal areas of Kerala and many other places as well as to other tropical countries of Asia, South America and Caribbean and Polynesian Islands. Morinda citrifolia L. was the second most popular plant used in herbal remedies by the ancestors of the Polynesians. Its roots, stems, bark, leaves, flowers, and fruits are used in various combinations in herbal remedies. It is also known as the most popular plant used for medicinal and nutritional benefits (Blancoa et al, 2006). Additionally, a yellow or red dye is produced from roots and used as a food in tropical regions throughout the world.

Minerals: 8.4% of the dry matter (potassium, sulphur, calcium and phosphorus; traces of selenium)

• Anthraquinones (damnacanthal extracted mainly from the roots, is of particular interest among the Anthraquinones) have anti-oxidative activity (anti-bacterial, anti-viral, anticancer activities, and analgesic)

• Polyphenols, reducing glycosides, lignin derivatives are the other sources of antioxidative activity in Morinda citrifolia

• Scopoletin is a coumarin and have analgesic properties as well as a significant ability to control serotonin levels in the body. It also has anti-microbial and anti-hypertensive effects.

World Noni Research Foundation (WNRF, Chennai, India) is dedicatedly working on M citrifolia for commercial production of Noni products and research being carried out through various Institutes. National Bureau of Plant Genetic Resources (NBPGR, New Delhi, India) is one of them working on conservation and also some molecular characterization.

Morinda citrifolia L., with its recognized antioxidant potential and without any known side effects can be used as food additives in the food processing industry and have prospective for use in preventive medicine. 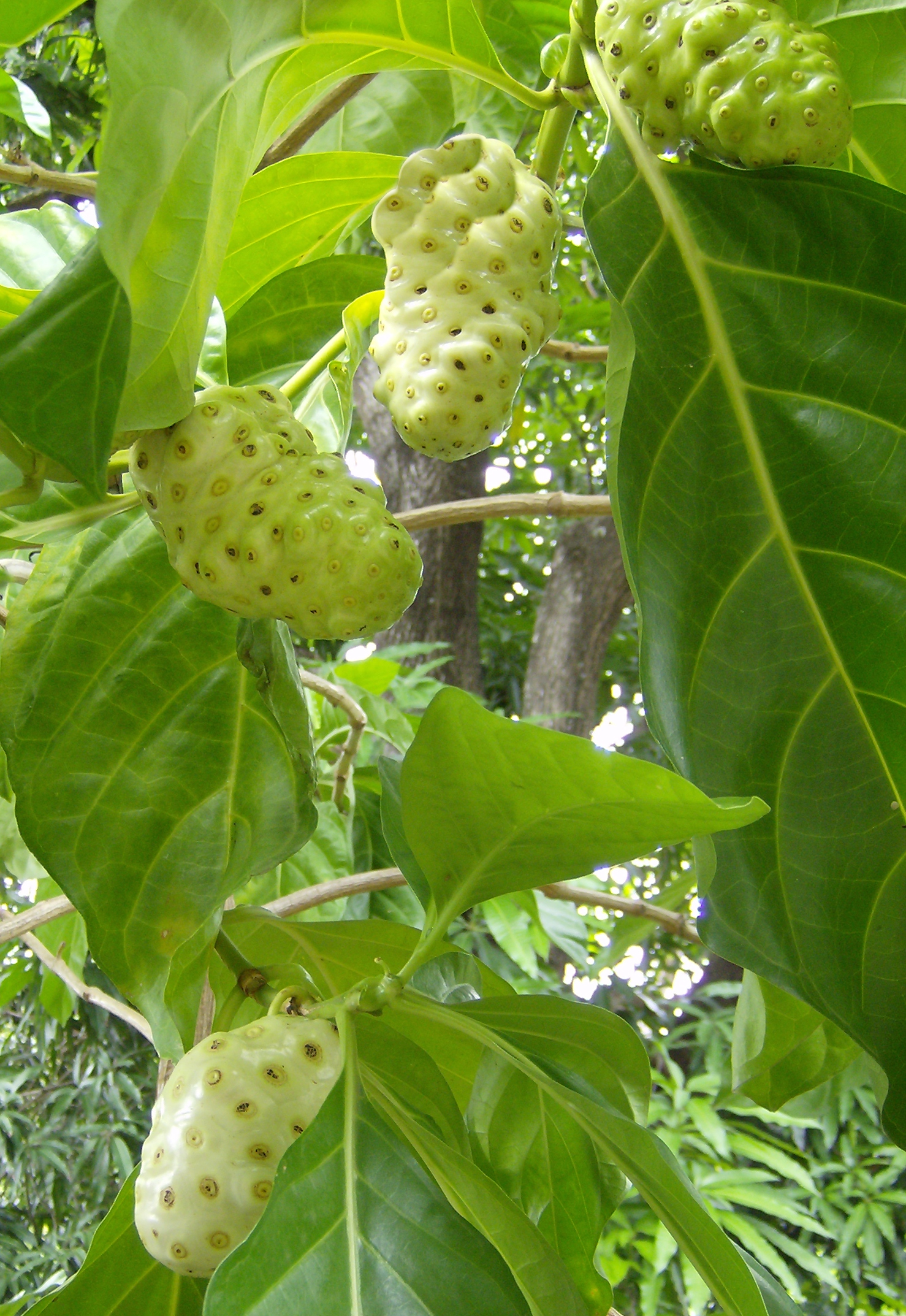