Nanotechnology involves study and use of materials on an ultra-small scale. Nanopesticides has been visualized as a rapidly evolving field that has a potential to revolutionize agriculture and food systems. Nanocapsules can be prepared using light-sensitive, thermo-sensitive, humidity-sensitive, enzyme-sensitive and soil pH-sensitive polymeric materials to deliver pesticides...
Nanopesticides: A way to manage food security and environmental pollution
Authors: Priya Saini*, Sarvendra Kumar, Vinod Kumar Sharma and Kapil Atmaram Chobhe
*Corresponding author E-mail: saini_priya77@yahoo.com

Nanotechnology is a recent approach and is a field of convergence among life sciences, material science and information technology. It involves study and use of materials on an ultra-small scale. Among the various advancements in science, nanotechnology has been visualized as a rapidly evolving field that has a potential to revolutionize agriculture and food systems which in turn can improve the condition of the poor. It comprises of four broad areas such as nanomedicine, nanofabrication, nanometrology, and nanomaterials. Nanopesticides can be defined as the plant protection products which are developed using nanotechnology to enhance the efficacy and reduce the environmental load of pesticides.

The global nanotechnology market has touched the US $29 billion mark in 2010. The exponential growth of global investment in nanotechnology research closely coincides with the number of patents relating to nano-products. During the 2016-2022, the global nanotechnology market is expected to grow at a compound annual growth rate of ~17 %.In India, Nanoscience and Technology Mission was established during the 10th plan (2002-2007) by the Department of Science and Technology with an allocation of Rs. 60 crores and was further upgraded during the 11th plan period as ‘Nano Mission’ with a budget of Rs. 1000 crores. The Nano Mission was also extended for the second phase in the 12th plan (2012-2017).

Within the sphere of agricultural sciences, nanotechnology application in relation to soil and crop management is in its infancy stage. In countries like India climatic conditions enforces much higher use of pesticides which increases the production cost. The nano technological interventions can reduce this production cost by reducing the amount of pesticides required. If Indian agriculture has to attain its national goal of over 4% sustainable agriculture growth, it is necessary to extend nanotechnology research across the entire agricultural value chain.

Nanotechnology is based on the fact that, materials when assembled in nanometric scales (<100nm) have distinct and better characteristics than conventional material. The chemical properties of nano sized materials may be controlled to promote several advantages, such as the possibility to better interaction and mode of action at a target site of the plant or in a desired pest due to its controlled release system and larger surface area.

Food security implies safe, nutritious and adequate food and its access by all people. Nearly one billion people in world are undernourished due to varying degree of poverty. If pesticides were abolished, the lives saved would be reduced by a factor of about1000 by the lives lost due to poorer diets. Pesticides also play an important role in controlling spread of deadly diseases of human and livestock, such as malaria.

Nanotechnology and its role in efficient pest control

Pesticides can effectively reduce plant pests and diseases to improve crop yields. However, traditional pesticide formulations have several disadvantages, such as high organic solvent contents, dust drift, and poor dispersibility as a result less than 1% remains on the target. This low effectiveness of conventional pesticides is due to leaching, evaporation and photolytic, hydrolytic and microbial degradation and it ends up in contaminating ground water and soil with highly toxic pesticide residues. Hence, efforts should be taken to extend the duration of pesticide activity on crops. Recently, an international panel of experts identified agricultural pesticides on top of list of ten nanotechnology applications that are most likely to benefit farmers to control pest problem throughout world. Controlled release systems can be used for selecting a suitable and timely administration route to regulate the target pest. 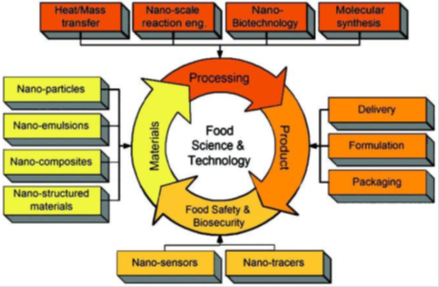 The chemical properties of nanopesticides varies significantly from conventional pesticides due to its small size and larger surface area and these properties can be utilized to develop an efficient assemble of a structure having several advantages, such as the possibility to better interaction and mode of action at a target site of the desired pest. Nano sized products shows more selectivity, without hindering in the bioactivity of compounds towards the target pathogen. Their increased toxicity is also due to increased penetration in body of pest. It reduces the problems associated with drifting and leaching and enables the use of smaller amount of active compound per area, as long as the formulation may provide an optimal concentration delivery for the target insecticide for longer times. There are various methods for preparing nanoproducts of pesticides such as nanoemulsions, nanocapsules and inorganic engineered nanoparticles (as metal oxides, metals and clays) which can be used to increase the efficacy of already existing pesticides or can be used to reduce their environmental toxicity or both. Among various techniques, nanoencapsulation is a versatile tool for hydrophobic pesticides, enhancing their dispersion in aqueous media and allowing a controlled release of the active compound. Since there is no need for re-applications, they also decrease cost, reduce phytotoxicity, and the environmental damage to other untargeted organisms and even the crops themselves. Colloidal nano silver solution is also reported to have good antifungal effect against Sphaerotheca pannosa var. rosae in rose. Similarly, nano-sulphur is potent fungicide against Erysiphe cicorecaerum and food pathogen Aspergillus niger. Imidaclorid nanocrystals encapsulated with natural polysaccharide, chitosan-alginate also showed higher toxicity against the adult stage of Martianus dermestoides, as compared to 95% Imidacloprid formulation. Nanocapsule suspension of pyridalyl is also found to be 1.6 times more toxic than commercial 10 EC formulation.

Most of the nanomaterials of pesticides available in the form of microcapsules or nanocapsules are slow release but environmental response based products could be more useful. Nanocapsules can be prepared using light-sensitive, thermo-sensitive, humidity-sensitive, enzyme-sensitive and soil pH-sensitive polymeric materials to deliver pesticides. These nanostructured materials can be prepared via different processes such as adsorption, coupling, encapsulation, and embedding (Huang et al., 2018)

Some of the pesticides such as pyraclostrobin have been shown to increase yield of rice crop affected by rice blast fungus but it is found to be toxic to aquatic organisms. But, Seltima, a microcapsule preparation addresses the pyraclostrobin’s toxicity by its slow humidity sensitivity release directly on the rice leaves. The pesticide’s residual activity and stability of abamectin can be increased by embedding it in hollow SiO2 nanosphere which shows controlled release. Encapsulation of active ingredient can also reduce the photolytic degradation rate of pyraclostrobin in water. Some pesticides such as avermectin and bentazone are sensitive to U.V. light with a very short half-life (6 h). But when avermectin is encapsulated in porous hollow silica-coated CaCO3 nanoparticles, its U.V. degradation is reduced, and sustained release properties is improved.

Gold nanoparticles behaved differently when embedded in the Poly-( N-isoproplyacrylamide) and their microcapsules show temperature dependent release. Pendimethalin capsules having higher cumulative release rate under acidic conditions than under alkaline conditions has also been developed. The emamectin benzoate showed comparatively faster release at higher temperature. Although nanotechnology offers the more effective and stable products that will benefit world, but at the same time potential harm on human health and environment may possible. Some nanoparticles due to its very small size can cross blood-brain barrier and affect the barrier integrity. According to some studies nano-silver can induce neuronal degeneration and necrosis by accumulation in brain over a period of long time (Tang et al., 2008).Therefore, sensible use of nanopesticides and development of new guidelines for such products apart from existing regulation for bulk material is necessary.


About Author / Additional Info:
I am currently working as a Scientist in the Division of Soil Science and Agricultural Chemistry, ICAR-Indian Agricultural Research Institute (ICAR-IARI), New Delhi, India since 2016. My area of research interest is Nanotechnological application in soil and plant research. I am also working in the area of soil humic acid extraction and characterization in different land management system. I completed my Ph.D. on "Residue studies of Pyridalyl and its nanoformulation on vegetables" from ICAR-IARI, New Delhi. I contributed in the area of pesticide nanofomulation in last few years.