Article is about new emerging pests on apricot its is largely because of climate change..
New Emerging Pest of Apricot in Cold Dessert areas of Ladakh
Authors: Kunzang lamo

Apricot (Prunus armeniaca), locally known as “chulli” is one of the most nutritive, delicious and commercially important fruit crop of Ladakh. It belongs to Rosaceae family and comes under stone fruit. It is widely grown in temperate regions of the world. The crop is widely of distributed in different parts of Ladakh with particularly abundance in Sham areas (lower Ladakh) including Dha-Hanu, Garkhon, Skurbuchan, Domkhar, Wanla, Khaltse and Timosgang. Apricot in Ladakh, is believed to have been introduced a century back either from China or Central Asia. Since then, apricot has become one of the most preferred and important commercial crop of Ladakh. Apricot can be grown easily and produce satisfactorily in the lower area of Ladakh. Usually the apricot growers do not follow the training and pruning practices in Ladakh which is one of the most drawback to commercialized it fully in this region. Apricot tree produce beautiful white or pinkish flowers in spring season that not only ensures the continuity of their population but also give a unique look to the sandy desert of trans-Himalaya. Apricot start ripening in the month of August-September. Manual harvesting is mostly done. Climate change is a big challenging factor for its growth and development in the region. Climate change has both positive and negative influence on growth of apricots. Due to climate change many new insect pests are emerging in this crop and one among them is the codling moth other include aphids, brown tail moth, red and black ants and birds. Earlier, aphids was known infesting only vegetable crops in Ladakh but recently in 2016 there was outbreak of this pest and started attacking on apricots making trees completely barren, there was no flower, no fruit, and there was huge yield loss in year 2016. Climate change would be likely to promote plant diseases like rusts, powdery mildews, leaf spots and leaf blights in different fruit crops. Climate change has the potential to modify host physiology and resistance and to alter stages and rates of development of the pathogen. New disease complexes may arise and some diseases may cease also.

Aphids are small soft-bodied insects, commonly known as plant- lice or greenflies, belonging to and family Aphididae. The different aphid species damaging agriculture crops (cereals, vegetables and fruits) in Jammu, Kashmir and Ladakh regions of J&K State, are not only abundant form of insects, but also show rich biodiversity, existing in the form of apterous adults and winged form, in diverse localities and areas of this region of paramount Zoogeographical importance in north-west Himalaya. The aphid is known for infestation mostly vegetables of Brassicaeae family. Rhopalosiphum nymphaeae has been observed to damage the leaves of fruit trees like apricot and plum. Many Myzus sp. are also known to infest the apricot crop in Ladakh. The infested fruits become shrink, shrivelled, dries up and ultimately fall off of trees. This leads to huge yield loss.

This moth is recently emerged insect pest on apricot in Ladakh region. The outbreak of this insect in cold arid region is due to climate change in past few years. The insect was reported in 2010 from Kargil district and in 2014 it was reported from Dha and Bhema. In 2016 its infestation was reported from Achinathang and Skurbuchan village but that the pest to attack. Due to climate change we are able to grow many vegetables in open and in protected structures which was not possible years back but on the other side many invasive pests were reported in this region which causes severe outbreak like locust, brown tail moth etc. Caterpillar causes severe allergic reactions to humans. When it comes in close contact with people, it can cause an allergic reaction, itching, rashes on their skin and breathing related which may be due to some toxins released by this insect in the air which we breathe or may be due to contact with the poisonous hairs of the insect. Contact of these hairs with human skin causes a rash that can be severe in some individuals. People can also experience respiratory distress from inhaling the microscopic hairs that blow around in the air. Direct contact with a caterpillar isn’t necessary for ill effects. 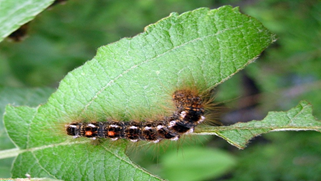 Ants are eusocial insects of the family Formicidae. The ants found on the apricot fruit is of two types on the basis of colour i.e. red and black one. These ants are very active during the fruit ripening period and attacks in a group making fruit unfit for consumption. These ants completely destroy the fruits by eating the whole fruit leaving stones behind. Black colour ants were found to infest almost all varieties of apricot but red colour ants were found to attack more on sweeter varieties like Halman. Fruits of Halman variety being sweeter than other varieties attack of ants are more.

Codling moth (Cydia pomonella L) is a member of the lepidopteran family Tortricidae. The larvae penetrates into the fruit and tunnel to the core, leaving a small, red-ringed entry hole in the fruit that are filled with reddish-brown, crumbly drop­pings. The infested fruits become shrivelled, smaller in size and thin covered as the larvae feed on the whole pulp, fruits become brown in colour and thin outer fruit skin dries up, and finally drop off pre-maturely. The larvae after feeding escape and start infesting another healthy ripe fruits of apricot. The larvae often infesting 40-90 % of the fruit. If left uncontrolled, larvae can cause huge losses to the apricot grower of Ladakh region. Such infested fruits cannot be consumed and marketed.

Fig. Figure shows the pinkish larvae and the apricot fruits infested by the larvae 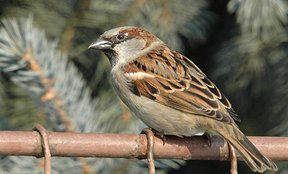 Most birds, along with their eggs can be seen in their nest built on branch of the trees.

Some common management practices need to be done to reduce the infestation:

It is very important to keep the orchards neat and clean. Sanitation is the precautionary method to avoid introducing a pest into a field. As we know prevention is better than cure. The farmers in Ladakh do not care about the sanitation of their respective orchards, it may be due to lack of awareness about pest and its life cycle. Always keep the orchard clean by removal and burying of fallen leaves, remove dried leaves from the trees and orchards in the winter as they can harbour eggs of the moth. Remove webs by pruning practices. Do this in the early morning or evening when the weather is cool and the moths are still in their webs. Dispose of the webs in a sealed paper bag in the garbage or compost pile or burying deep under the soil. Judicious use of pesticides must be done to control the pest infestation. Use of biodegradable or environmentally safe pesticides like plant extracts (Neem oil formulation, Datura stramonium and Garlic extracts formulation etc.) significantly reduce the pest infestation through eco-friendly approach. This is an elegant way of reducing the amount of pesticides residues on agriculture and horticulture crops. We can implement Integrated Pest Managements. The IPM is a little bit difficult but not impossible because it is a systematic approach to pest controls that combines biological, cultural and other alternatives rather than single approach. The farmer should daily visit his field in morning hours if any incidence of pest infestation noticed then contact concerned department or concerned scientist. He or she rogue out and bury the infected plant or plant parts in early stages. In early stages, it is easy to manage pest infestation. Crop rotation is also very simple and cultural method to control various insect pests infestations. Do farming in a scientific way like line proper spacing, crop rotation, use well decomposed organic matter in the soil, regular watch and ward of the field, proper sanitation in the field, seed treatment before sowing, procure seed from reliable source etc. is the need of the hour. Always adopt cultural and biological practices in managing insect pest instead of chemical. When any pest causes severe outbreak and havoc then it’s important to use the chemical in a judicious way to manage that pest. Use chemicals as a last resort for managing insect pest.