Opium Poppy - A Wonder Medicine: Use and Conservation

Plants are a major source of medicines for humans so they are used in various branches of medicine, like Ayurveda, Siddha, Unani and Homoeopathy. There are about 422000 plant species that are present on the earth, out of which about 52885 plants are used for medicinal purpose.

Opium poppy (Papaver somniferum L.) is a multipurpose crop plant which is used as a medicinal (contains a lot of alkaloids) or ornamental (have very beautiful and coloured flowers) plant, as well as a source of seeds and seed oil. It is chief source of diverse physiologically active alkaloids viz. morphine, codeine, thebanine, papaverine and narcotine etc. These alkaloids having great industrial values for manufacturing the drugs. Besides, it is also grown as a source of edible seed and seed oil. Its seeds are very nutritive and contain high percentage of linoleic acid Singh et al. (1990). Opium poppy is one of the oldest known pain killer and used for analgesic, hypnotic, sedative, antispasmodic, antitussive and sudorific purpose in various systems of medicines.

In recent years the global trends show that the consumption of opium alkaloids and its derivatives are growing. Morphine, which is the main and narcotic component of opium showed tenfold demand in last two decades. Despite this the international trend shows that it is likely that there will be new domestic and international demand for thebaine based drugs. Since thebaine is used as base component for the manufacture of semi-synthetic morphine anaologus i.e. oxycodone, oxymorphine and buprenorphine etc. and having no narcotic effect are some novel merits which increase its global demand.

Opium poppy is an annual autogamous plant (2n=22) originated from Turkey. Opium poppy usually has a white, purple and pink terminal flowers and alternating leaves. The flowersâ€™ petals (five or more) are usually quite large and tissue like. The petals surround the unripe fruit capsule until the fruit capsule matures then the petals fall off. The characteristic fruit type of opium is the unilocular capsule. Time of cultivation is last week of October to first week of November.

Production and productivity is low due to lack of genetically improved cultivars for latex yield, disease and frost tolerance. Opium poppy is a cash crop but not more research work has been done because this crop need license and more care for cultivation.

Use of improved technology and high yielding varieties under protected cultivation can increase the production to maintain constant supply of quality materials for full fill the requirement of population. 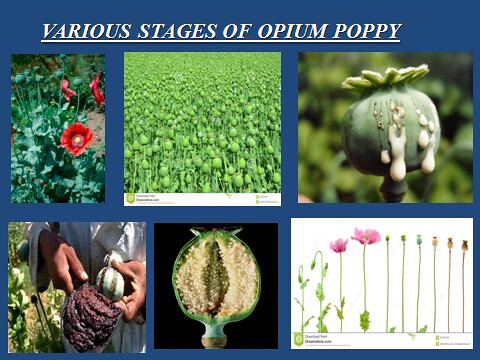