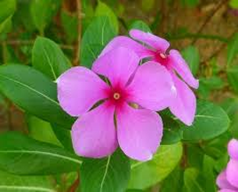 Periwinkle is a happy-go-lucky small sub shrub. It grows in adverse conditions, rain, heat, dust. It can be quite often seen growing out of cervices of walls. It is an evergreen sub shrub or herbaceous plant growing 1 m tall. The leaves are oval to oblong, 2.5–9 cm long and 1–3.5 cm broad, glossy green, hairless, with a pale midrib and a short leaf-stalk 1–1.8 cm long; they are arranged in opposite pairs. The flowers are white to dark pink with a darker red centre, with a basal tube 2.5–3 cm long and a flower 2–5 cm diameter with five petal-like lobes. The fruit is a pair of follicles 2–4 cm long and 3 mm broad. Lots of cultivars have been developed with various colors, from red to white.

In ayurveda the extracts of its roots and shoots, though poisonous, is used against several diseases. In traditional Chinese medicine, extracts from it have been used against numerous diseases, including diabetes, malaria, and Hodgkin's lymphoma. Many of the vinca alkaloids were first isolated from Catharanthus roseus. The substances vinblastine and vincristine extracted from the plant are used in the treatment of leukemia and Hodgkin's lymphoma.

An herbal remedy with a rich history in folk medicine, periwinkle is the common name for a pair of perennial flowering shrubs belonging to the dogbane (Apocynaceae) family. The herb has been used for centuries to treat a variety of ailments and was a favorite ingredient of magical charms in the Middle Ages . The purple-flowered plant was called sorcerer's violet by superstitious Europeans and was renowned for its power to dispel evil spirits. There are two main varieties: lesser periwinkle (Vinca minor ), which is also called common periwinkle, and greater periwinkle (Vinca major ). Lesser periwinkle originated in Spain , France , and other areas of Europe but can now be found growing in many parts of the world, while greater periwinkle is native to southern Europe. While not widely recommended for medicinal purposes today, periwinkle is sometimes used to improve brain circulation and alleviate heavy menstrual periods. Only the aboveground parts of the plant are used as a drug.

While not approved by the Food and Drug Administration ( FDA ), periwinkle has been reported to have a number of beneficial effects. Unfortunately, there is scarcely any scientific evidence to support these claims. Both forms of the herb have been used as an astringent for centuries and may be useful in alleviating excessive bleeding during menstruation, according to some herbalists. Lesser periwinkle is generally recommended for improving circulation, particularly in the brain. Greater periwinkle has been used to combat nervousness or anxiety and help reduce high blood pressure. Periwinkle is also reputed to be effective in treating diabetes, perhaps by stimulating the pancreas.

While they do not recommend periwinkle for a wide variety of ailments, some practitioners of alternative medicine claim that the herb is useful in treating certain conditions. Periwinkle has been used as an effective astringent that can be used orally or topically. It is mainly used to treat excessive menstrual bleeding but may also be a helpful choice in cases of colitis, diarrhea, bleeding gums, nose bleeds , sore throats, and mouth ulcers.

Perhaps the most intriguing dietary supplement derived from periwinkle is vinpocetine, which is made from an alkaloid chemical in lesser periwinkle called vincamine. While vinpocetine is not what most people would consider a natural remedy, since it is produced via chemical manipulation in the laboratory, it is sold in the United States as a dietary supplement. Several studies of vinpocetine suggest that it may improve brain function and memory, particularly in people affected by diseases that decrease mental capacity such as Alzheimer's disease or dementia . In a double-blind, placebo-controlled trial published in the Journal of the American Geriatrics Society in 1987, vinpocetine appeared to improve the condition of several dozen elderly patients who suffered from mental impairment due to aging . Researchers found that the 42 patients who took vinpocetine for three months performed better on several tests of mental functioning than those in the placebo group. In the study, no significant side effects were associated with vinpocetine.

The optimum daily dosage of periwinkle has not been established with any certainty. Readers who wish to use this herb should follow the package directions for proper usage or consult a doctor experienced in the use of alternative remedies.

The dosage of vinpocetine is generally 30 mg a day, divided into three equal doses. Taking vinpocetine with food may enhance its effectiveness by increasing the amount of drug absorbed.

Periwinkle is not known to be harmful when taken in recommended dosages, though it is important to remember that the long-term effects of taking the herb (in any amount) have not been investigated. Periwinkle should not be used by people with low blood pressure or constipation . Due to lack of sufficient medical study, periwinkle should be used with caution in children, women who are pregnant or breast-feeding, and people with liver or kidney disease.

Taking too much periwinkle can cause a potentially dangerous drop in blood pressure (Symptoms include dizziness and fainting). In case of overdose, seek emergency care.

Vinpocetine should not be combined with certain medications or dietary supplements (see below).

Periwinkle may cause flushing and gastrointestinal problems.