Safed musli ( Chlorophytum borivilianum, 2n=4x=28), Family Liliaceae is a biannual herb popularly known as safed musli in trade in India, is considered as wonder drug in Indian systems of medicine (Ayurveda, Unani and Siddha) due to its aphrodisiac and sex tonic properties. It is being used as an anti arthritic and anticancer drug. Because of its aphrodisial properties, it is mainly identified as 'Herbal viagra'. Safed musli roots are the major constituents of more than 100 Ayurvedic formulations (Oudhia, 2000).

It has gained prominence as safed musli because on processing it yields milky white tubers which have been in use as nutritive tonic as aphrodisiac agent, employed as Rasayana (Puri, 2003) and also an important constituent of Chyawanprash an important rejuvenator (Handa, 1996). The compositions of safed musli are carbohydrates (41%), protein (8-9%), saponins (2-17%) and root fibres (4%). Saponin is the chief medicinal compound present in roots.

Since a long time wildly growing plants of safed musli has been the major source of supply of the drug (saponin) to herbal drug industries. However, over exploitation of natural resources has dwindled the population of Safed Musli in its natural habitats.

Safed musli is mainly vegetatively propagated because Seeds remain dormant for nearly 10 months and also suffer from poor germination. Successful use of micro propagation protocol and synthetic seed has also been reported. As safed muli has tremendous properties which can be utilised for health caring of human beings, a special care should be taken in cultivation of Chlorophytum borivilianum, isolation of different phyto constituents specially saponin, so true medicinal value of our indigenous medicinal plant can be explored. 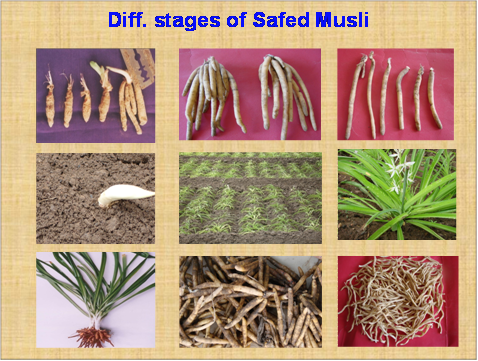