Protective Role of Brassinosteroids in Plants Against Heavy Metal

Abiotic and biotic stresses adversely affects on plant growth, development and productivity. Abiotic stress is classified into temperature, water, oxidative and salinity stress. Among which oxidative stress cause mainly due to nutrient deficiency or accumulation of heavy metals. "A heavy metal is a metallic element which is toxic and has a high density, specific gravity or atomic weight with a potential negative health effect or environmental impact".

Heavy metals accumulated in soil and water due to human activities like mining, smelting, industrial waste, vehicle emission, use of fuels and explosives, electroplating, leather processing and finishing, manufacture of special chemicals and cleaning agents (Dalcorso, 2012). The accumulation of certain heavy metals in soil or sewage water cause the negative effect on plant growth and productivity.

Negative Effect of Metals on Plant 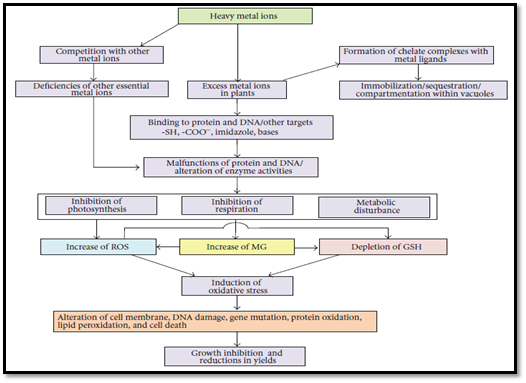 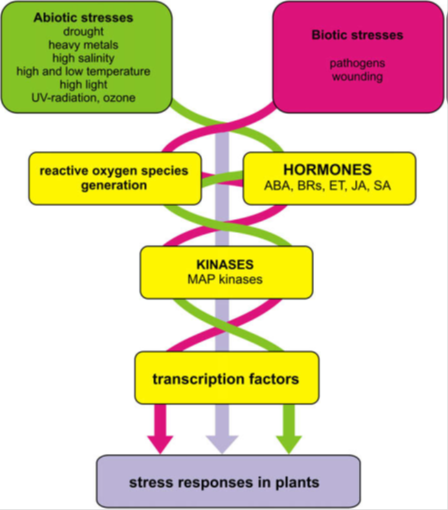 Mitchell in 1970 first time extracted from rape pollen and Grove in 1979 identified as brassinolide. BRs are a class of polyhydroxy steroids, sixth class of plant hormones, occur in free form and conjugated to sugars and fatty acids. Brassinolide, 24-epibrassinolide and 28-homobrassinolide are the three biologically active and being widely used in studies (Rao et al., 2002).

Role of Brassinosteroids in plants

The 24-Epibrassinolide detoxify the stress generated by CdCl2 and significantly improve growth, the level of pigment parameters, green pod yield, membrane stability index, level of proline and activity of antioxidant enzymes which were reduced due to CdCl2 (Rady 2011). Similar results were recorded by Anuradha and Rao (2011) in Pb treated radish plant. They also observed that the photosynthetic rate, activities of nitrate reductase and glutathione reductase reduced under presence of Pb and increased on the exogenous application of brassinolide. EBR also ameliorates Cr(VI) stress via influencing the levels of IAA, ABA, polyamines and antioxidant system of Radish seedlings by enhancing level of polyamines, IAA, ABA, ascorbic acid, glycine betaine and proline even in the presence of Cr and decrease the content of malondialdehyde and H2O2 (Choudhary et al., 2011). Xia et al., (2009) have already reported that BRs promote photosynthesis and growth by enhancing activation of Rubisco and expression of photosynthetic genes in Cucumis sativus. BR increased photosynthesis, through regulating the expression of genes for the Rubisco subunits and other Calvin cycle enzymes.

BRs help to regulate the uptake of ions and reduce the uptake of heavy metals. Application of BRs improves plant growth and resistance against heavy metal stress. Stimulate the synthesis of some antioxidants such as proline, glutathione, ascorbic acid, glycine betaine and phytochelatins. Increase the activities of antioxidant enzymes like catalase, peroxidase, SOD, APOX and GPOX. Decrease the production of ROS and prevent the cell from damage. Cause the induction of other growth promoting hormones. BRs are environment-friendly suitable for yield promotion when soil is contaminated by heavy metals.


About Author / Additional Info:
I am a Ph.D. scholar in Biochemistry with Inspire fellowship