RNA interference (RNAi) is a naturally occurring mechanism that leads to the "silencing" of genes. In consequence, the respective protein is no longer synthesised. In nature, this mechanism is used for the regulation of specific genes and is also applied as a defence against viruses. RNA interference (RNAi) is a form of post transcriptional gene regulation in which non translated double stranded RNA (dsRNA) molecules called small interfering RNA (siRNA) mediate sequence specific degradation of target messenger RNA (mRNA). RNA silencing is a novel gene regulatory mechanism that limits the transcript level by either suppressing transcription (TGS) or by activating a sequence- Specific RNA degradation process [PTGS/RNA interference (RNAi)]. The silencing effect was first observed in plants in 1990, when the Jorgensen laboratory introduced exogenous transgenes into petunias in an attempt to up-regulate the activity of a gene for chalcone synthase, an enzyme involved in the production of specific pigments (Agrawal et al., 2003). The natural function of RNAi is referring to the mechanism involved in cellular defense against viruses, genomic containment of retro-transposons, and post-transcriptional regulation of gene expression. RNAi can specifically silence individual genes, creating knockout phenotypes, either in transformants that can produce the required hairpin RNAs, or upon infection with recombinant RNA viruses that carry the target gene (VIGS, viral-induced gene silencing) (Tenea, 2009).RNAi is a multistep process involving the generation of small interfering RNAs (siRNAs) in vivo through the action of the RNase III endonuclease 'Dicer'. The resulting 21- to 23-nt siRNAs mediate degradation of their complementary RNA (Zou et al., 2005). Recently two RNAi based crops have been given regulatory approval for commercial production and sale. These are the non-browning Arctic apples and the non-browning Innate potatoes. The firms producing these crops claim that the idea behind producing the non-browning apples and potatoes is not only to improve the look of the product, but it is also intended to increase the consumption of the raw fruits along with reducing naturally occurring carcinogens (as in the case of innate potatoes). While the science behind both these products is a little complicated as both are RNAi based, in simple way it can be put as both apples and potatoes have certain genes suppressed. Both of them, though genetically modified, are grown the same way as conventional varieties. These products are likely to find a place of attraction in the fresh-cut product sales.

1. The entry of long double stranded RNA, such as an introduced transgene, a rogue genetic element or a viral intruder, triggers the RNAi pathway of cells. This results in the recruitment of the enzyme Dicer.

3. An RNAinduced silencing complex (RISC) then distinguishes between the two siRNA strands as either sense or antisense. The sense strands (with exactly the same sequence as the target gene) are degraded.

4. The antisense strands on the other hand are incorporated to the RISC. These are used as guide to target messenger RNAs (mRNA) in a sequence specific manner. 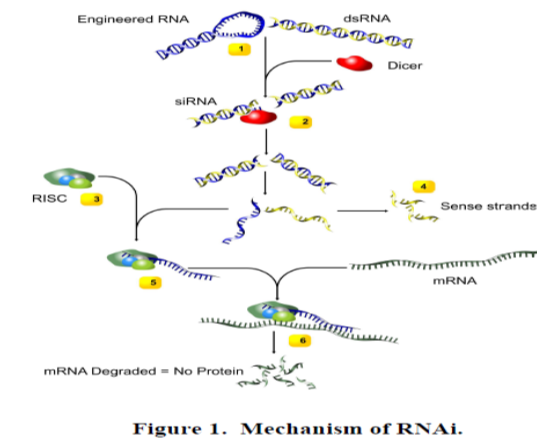 1. In plant system, it provides defense mechanism to protect against infection by viruses, transposons and other insertional elements.

4. Application in improvement of nutritional value:

Disadvantages of RNAi
• It does not knockout a gene for 100%.
• siRNA tends to activate unwanted pathways.