RNAi interference (RNAi) has emerged as one of the major functional genomics tool in plant study. RNAi involves in the production of double-stranded RNA (dsRNA) that is homologous to the gene which is being targeted for Post Transcriptional Gene Silencing (PTGS). This dsRNA is processed by an enzyme known as Dicer into approximately 21-nucleotide RNAs, known as small interfering RNAs (siRNAs). These siRNAs then provide specificity to endonuclease-containing, RNA induced silencing complex (RISC), which targets homologous RNAs for degradation. 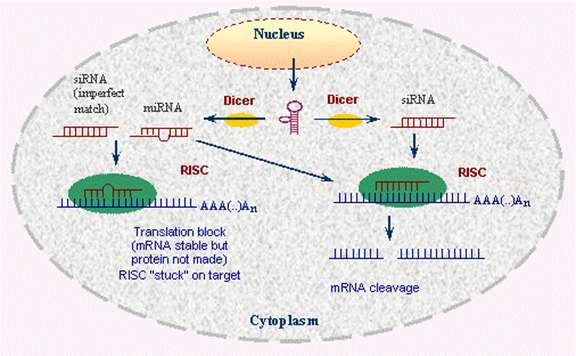 RNAi as a reverse genetics tool to knock down expression of targeted genes in plants, lower animals and microorganisms has expeditiously gained significance in research field.

RNAi has many advantages over other functional genomics tools like the potential to target multiple gene family members with a single RNAi-inducing trigger gene sequence and another advantage is gene knockdowns due to RNAi are dominant. Dominance of RNAi can save time by removing additional generations needed to identify individuals that are homozygous for recessive loss-of-function alleles. Similarly, in F1 hybrids, orthologs can be knocked down in which RNAi-inducing transgene can be introduced through only one of the parents. Finally, RNAi allows knock down of genes in polyploid genomes that contain several orthologs and hence are not suitable to traditional mutagenesis.

RNAi based gene silencing mechanism is conserved in plants and animals hence it not only important for functional genomics but also can be equally utilized in agricultural applications like genetic engineering in plants against stress tolerance. Further research in the improvement of techniques of RNAi method can offer enormous potential to cope up with several challenges in agriculture.

About Author / Additional Info:
I am working as Senior Scientist in ICAR-Indian Institute of Wheat and Barley Research. My specialization is Agricultural Entomology. The co-author of the article is Priyanka Chandra is Agricultural Microbiologist in the same institute.