A study was undertaken in India to determine the effectiveness of sorting and grading procedures prior to blanching, followed by a combination of manual and electronic eye sorting (camera sorter) after blanching to get rid of the aflatoxin contaminated kernels from the bulk peanut lot. The study conclusively proved that the blanching used in conjunction with manual and electron..
Remove aflatoxin contaminated kernels from bulk lot of peanuts through colour sorting

Aflatoxin contamination due to invasion by Aspergillus flavus (Fig.1) and A. parasiticus is a major problem in peanuts (also called groundnut). Aflatoxins are potent toxic, carcinogenic, mutagenic, immunosuppressive agents, produced as secondary metabolites by the fungus. Among 18 different types of aflatoxins identified, major members are aflatoxin B1, B2, G1 and G2 (Fig 2). Aflatoxin contamination although does not affect yield, but it causes serious health risks to human and cattle. Kumar et al. (2008) reviewed the commodity-wise etiology and contamination process of the major mycotoxins and the magnitude of contamination in commercially important agricultural commodities. The distribution of aflatoxins is very heterogeneous in a lot. Most of the aflatoxins in contaminated materials reside in only a small proportion of the kernels. If this substandard material could be separated and discarded the remaining high quality nuts will be virtually free from aflatoxins. 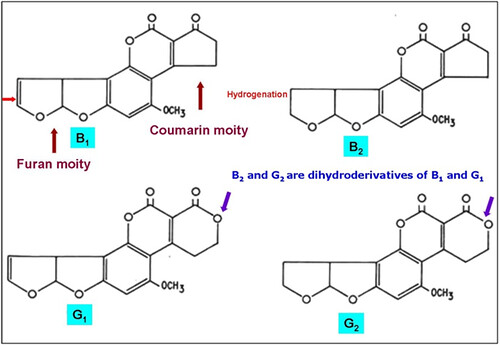 Contamination of peanuts with aflatoxin may occur despite the most strenuous efforts directed at prevention. However, a good potential for removing kernels contaminated with aflatoxins exists at the processing level when the peanut is blanched for value addition. On-site studies conducted at Directorate of Groundnut Research (formerly NRC for Groundnut), Junagadh, Gujarat in India, in association with some the peanut processing industries to know effectiveness of sequential sorting on removing aflatoxin contaminated kernels from bulk peanut (Kumar et al, 2010). Farmersâ€™ stock of a Virginia bunch peanut cultivar, GG-20, presumably containing aflatoxins was passed through sequential processes of shelling, sizing and grading (mechanical and camera sorting), roasting, blanching, colour sorting (camera sorting followed by manual sorting) before value addition and packaging.

The results revealed that the sequential sorting process was effective in separating aflatoxin-contaminated kernels from bulk peanut lot (Table 1). The electronic eye sorting in conjunction with manual sorting resulted in reduction of aflatoxin content of bulk lot from approximately 200 ug kg-1 to <30 ug kg-1 in the good grade HPS peanut.

* Range of aflatoxin in 10 samples

When the aflatoxin-affected kernels were split open the white mycelium with greenish sporulation of the A. flavus was visible in most of the kernels, but the same was absent in the kernels that developed burnt spots during roasting (Fig. 4). 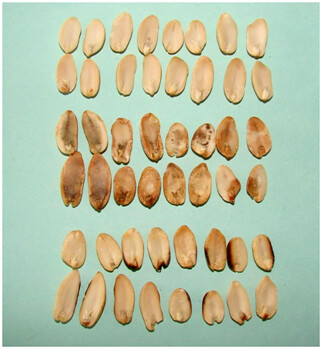 The peanut industries involved in processing and value addition should invariably follow the sequential sorting procedures to ensure supply of aflatoxin free peanut to consumers.