Role of Mulching in Vegetable Cultivation

Mulching in general is a beneficial practice for crop production. Mulch is simply a protective layer of a material that is spread on top of the soil. It enriches and protects soil and provides a better growing environment. At the same time it acts as barriers to movement of moisture out of the soil. Mulches support infiltration of runoff and irrigation water as the mulches prot..
The development of polyethylene as a plastic film in 1938 and its subsequent introduction as a plastic mulch in the early 1950s revolutionized the commercial production of selected vegetable crops. Throughout the succeeding years, research, extension, and industry personnel, together with growers, have documented the advantages of using plastic mulch as one component of a complete “intensive” vegetable production system. A variety of vegetables such as muskmelons, honeydews, watermelons, squash, cucumbers, tomatoes, peppers, eggplant, okra, sweet corn, and cole crops have shown significant increases in earliness, total yield, and quality.

Mulching in general is a beneficial practice for crop production. Mulch is simply a protective layer of a material that is spread on top of the soil. It enriches and protects soil and provides a better growing environment. At the same time it acts as barriers to movement of moisture out of the soil. Mulches support infiltration of runoff and irrigation water as the mulches protect the soil surface from the impact of raindrops preventing soil crusting.

Vegetable cultivation in India is susceptible to several pathogenic agents and among them, losses caused by viral diseases are enormous. Although, insecticidal interventions bring down the pest damage, they have led to problem of pesticide residues in fruits and vegetables. Insect vectors of viruses have often evolved resistance to commonly used pesticides, which requires some alternative control strategies. Moreover, excessive use of pesticides led to the development of undesirable problems like destruction of natural enemies, pest resurgence, and failure of control strategies leading to outbreak of pests. Under such circumstances, mulching is a good option for virus-vector management to control the yield loss. It also helps in having good quality produce.

Mulches are available in many forms. The two major types of mulch are inorganic and organic. Inorganic mulches include various types of stone, lava rock, pulverized rubber, geotextile fabrics, and other materials. Inorganic mulches do not decompose and do not need to be replenished often. On the other hand, they do not improve soil structure, add organic materials, or provide nutrients. For these reasons, most horticulturists and arborists prefer organic mulches.

Organic mulches include wood chips, pine needles, hardwood and softwood bark, cocoa hulls, leaves, compost mixes, and a variety of other products usually derived from plants. Organic mulches decompose in the landscape at different rates depending on the material, climate, and soil microorganisms present. Those that decompose faster must be replenished more often. Because the decomposition process improves soil quality and fertility, many arborists and other landscape professionals consider that characteristic a positive one, despite the added maintenance.

Control of Pests and Diseases: Reflective mulches repel invading insect populations, reducing numbers on seedlings and small plants. Silver mulch is polyethylene sheeting coated with a thin layer of aluminum and that reflects ultraviolet rays. These UV rays, coming from an unexpected direction, have been found to confuse insects specifically aphids, whiteflies and leafhoppers decreasing the chances that they land on and feed on the plants growing on the mulch. Aphids often spread harmful viruses that render heavy crop losses in terms of quality and quantity. Repelling insect vectors with a reflective surface (like silver colour) covering the ground between plants was found to be effective in reducing or preventing virus infection. The white flies and thrips count have been depicted in Fig. 1 and 2 using silver mulch, straw mulch and without mulch. Both the silver and straw mulch were at par in controlling the vectors with respect to the without mulch. Disease incidence was also almost negligible in both the crops. Growth and yield was far better in the mulched treatment rather than the un-mulched one. The use of silver mulch is an effective method of reducing losses from the thrips borne Tomato spotted wilt virus in certain crop plants. Mulches appear to be an increasingly important strategy that can be employed against virus diseases.

General Mulching Recommendations: Firstly, knowledge of proper selection of mulch is essential. Depending upon the use and criteria, selection of mulch is required. Using the right mulch can help to conserve water, shield plant roots from temperature extremes, improve the soil, and discourage the growth of weeds. For vectors such as aphids, white flies, thrips and hoppers transmitting viruses, silver colour reflective mulch is beneficial as it acts as a repellant. Similarly, for controlling weed, white colour mulch and for increasing temperature black is useful. Experiments conducted at our research farm have shown significant results in vector-virus management in okra and capsicum. Trails were conducted using silver mulch and straw mulch as indicate in Fig 1 and 2 to show the efficiency and usefulness of the mulch. The thickness of the silver mulch is 25 micron and width 1.2 meter. Dried paddy mulch was used as organic mulch.

Field Preparation: The use of plastic mulch requires a unique application process to ensure proper placement of the plastic film. This application process begins with preparing the field the same way one would for a flat seed bed. The bed must be free of large soil clods and organic residue. Depending upon the crop spacing, ridges are made accordingly at a particular distance. The drip lines are placed on the ridges. Drippers are fitted as per the plant to plant distance of the crop. After laying of drippers, mulches are placed above it. The borders (10 cm) should be anchored inside the soil in about 7-10 cm deep in small furrows at an angle of 45°. It helps to keep the mulches intact to the soil. Mulch should be laid on a non-windy condition. The mulch material should be held tight without any crease and laid on the bed. The mulch material should be punctured at the required distances as per crop spacing and laid on the bed. The seeds/seedlings should be sown/transplanted in the holes. Similarly the straw mulch is also placed on the rides with a uniform layer and the sides are anchored with the soil.

1. Protects the soil from erosion.

2. Reduces compaction from the impact of heavy rains.

4. Maintains a more even soil temperature.

12. Minimize other fungal and bacterial disease. 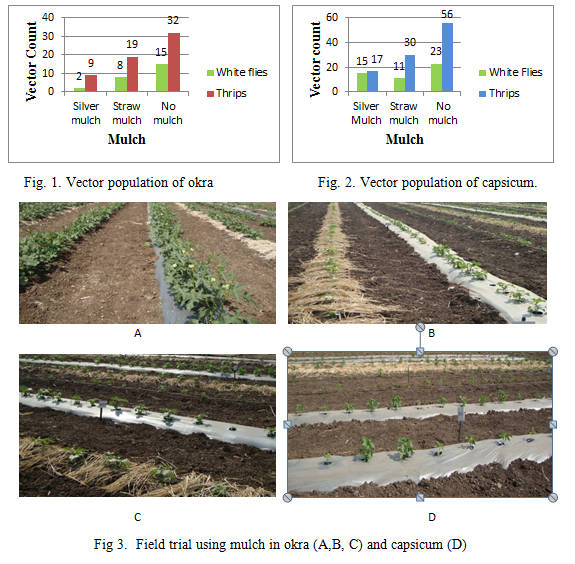 With proper planning, good management, attention to details, and dedication to all aspects of the cropping sequence, earlier and higher yields are possible through use of mulch. Mulching is a good practice for virus-vector management. Silver mulch is a good option for controlling the vectors like aphids, white flies etc. From the experiments conducted at our research farm, the next best mulch is the paddy or the straw mulch. Farmers can adopt this mulch as it is cheap, organic and biodegradable.