Crocus sativus L. is an autumn flowering herbaceous perennial cormous plant, the dried stigmas of its flowers is famously called as Saffron (Kesar in India), widely used as herbal medicine or food coloring, and as a flavoring agent.The name ‘Saffron’ is actually derived from Arabic word ‘Zaffron’ meaning yellow - the color of paste of saffron.Saffron is the most expensive farmed agricultural product per gram.

The genus Crocus L. (Family: Iridaceae) consists of more than 100 small corm-bearing perennial species occurring in the wild in Europe, the Middle East and North Africa, and are grown as ornamentals throughout the world.Crocus sativus is a sterile triploid (2n=3x=24) cultivated species, of unknown origin from other diploid and polyploid species in the genus.In contrast to the intraspecific variability seen in other Crocus species, it has minimal genetic variation.Based on morphological and karyotype studies, Crocus cartwrightianus has been reported to show some similarity with Crocus sativus suggesting it to be a possible progenitor.IRAP (inter-retroelement amplified polymorphism) analysis has now indicated that the most likely ancestors of allotriploid Crocus sativus areCrocus cartwrightianus and Crocus pallasii subsp. pallasii (Alsayied et al. 2015).Archaeological records indicate that Crocus sativus was cultivated and used as a spice and/or medicinal plant in the Mediterranean basin as early as the late Bronze Age.However, there is no consensus on where the first saffron plants were domesticated and grown (Molina et al. 2015).It is cultivated in many countries such as Azerbaijan, China, France, Greece, Egypt, Kashmir (India), Iran, Israel, Italy, Mexico, Morocco, Spain and Turkey in environments characterized by cool winters and warm dry summers.Iran, Spain, Greece and Italy are leading saffron producing countries in the world.

In Kashmir province of Jammu and Kashmir state of India saffron is the second important cash crop after apple having a long history of cultivation and is cultivated on elevated plateaus locally called as wudars (karewas) of alluvial or lacustrine soils.Currently over sixteen thousand families living in about three hundred villages of the state mostly in and around Pampore in Pulwama district of Kashmir valley where world famous saffron fields are located are involved in its farming.Nearly 61% of the farmers engaged in saffron farming are having land holdings below 0.6 hectares.Saffron is also cultivated in Kishtwar area of Jammu province of the state (Fig. 1A).During last two or three decades saffron production in Kashmir and in almost all other producing countries has unfortunately shown a declining trend.Uncontrolled and unplanned urbanization, low productivity, lack of proper irrigation facility and lack of awareness about the package of practices and newer technologies helpful in cultivation practices are some of the reasons for this trend in Kashmir where from 5,707 hectares in 1997, saffron fields have now been reduced to 3,010 hectares and from 16 metric tons, annual saffron production has come down to 6 metric tons in the state.Similarly flower yield/hectare has now been reduced to 140-200 Kgs from earlier 300-400 Kgs.Scanty rainfall during the month of September badly hampers saffron crop production.

The outstanding feature of saffron flower is the three pronged style with each prong terminating into a vivid 25-30 mm long scarlet stigma drooping over 6 perianth segments (Fig. 1C).Flowering occurs during autumn generally in the month of October followed by vegetative stage throughout winter and the formation of replacement corms at the base of shoots.Large number of shoots per corm result in the formation of several small-sized replacement corms.In the months of April or May the leaves senesce and wither coinciding with a rise in temperature and the corms go into dormancy.This long vegetative phase and obviously photosynthetic period is essential for the complete development of replacement corms.The transition to reproductive stage occurs during the month of July.From around mid July, the sheathing non-photosynthetic white leaves known as cataphylls start to grow at a faster rate than the shoot apex piercing through the soil and protecting growth of young shoot and the scape.Since the ability of a corm to produce flowers depend on its size, quality planting material in terms of corm size is of paramount importance in obtaining immediate good yield of saffron.We have found that corms weighing less than 17 g fail to produce flowers while those which are 30 g or more are ideal for increased flower and saffron yield during first year of planting and that saffron yield/flower (style and stigmas together) range from 6-10 mg and depend on size of the corm (Joo and Sultan, 2013).In this study we have also found that corms which are 30 g or more often produce maximum of four flowers, otherwise number of flowers produced per corm on an average may be 2-3.We have also observed that cataphylls in large sized corms emerged from the soil earlier than those of lesser size and produced flowers followed then by leaves.The average number of leaves in non-flowering corms was 5.5 and 10 in flowering ones.More shoots and leaves in larger corms support the development of more number of daughter corms during subsequent year of planting.These daughter corms are the means of propagation in saffron.Roughly 150,000 flowers must be carefully picked one by one to obtain one kilogram of spice of commercial value. 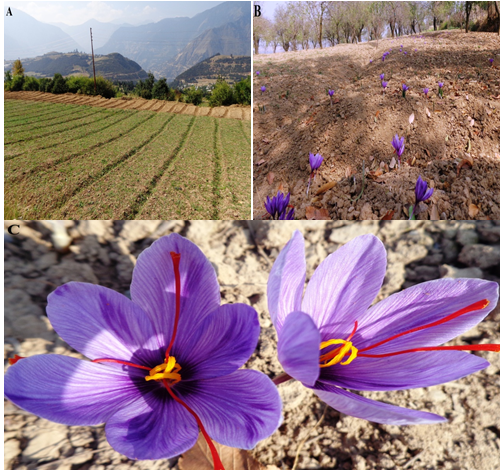 Saffron has a distinct color, flavour and odour.Besides its use as food coloring and flavoring agent, the stigmas are also used in folk medicine as an anticatarrhal, eupeptic, antispasmodic, expectorant, emmenagogue and nerve sedative (Rios et al. 1996).It has widely been used in Persian traditional medicine for memory problems (Akhondzabeh, 2007) and has now been proven to contain promising class of compounds for the treatment of psychiatric diseases like anxiety disorders and schizophrenia (Pitsikas, 2016).It is also believed to be diuretic and helpful in neutralizing bad body odour.

Chemical analysis of Crocus sativus stigmas has shown the presence of about 150 volatile and non-volatile compounds.The volatiles consist of more than 34 components that are terpenes, terpene alcohols and their esters among which safranal are the main component.Non-volatile compounds comprise crocins, crocetin, picrocrocin and flavonoids (quercetin and kaempferol) (Liakopoulou-Kyriakides and Kyriakidis, 2002).In particular, crocins, glucosyl esters of crocetin, are water-soluble carotenoids and are responsible for saffron’s characteristic colour.Picrocrocin, glycoside of safranal, is responsible for the bitter taste of the spice and is the precursor of safranal.Safranal, the main component of the distilled essential oil, is a monoterpene aldehyde, responsible for its characteristic aroma (Tarantilis et al. 1995, Kanakis et al. 2004).Highest concentration of these constituents particularly safranal has been recorded in the stigmas of flowers which are in so called balloon stage ready to open fully.It has been reported that the total content of carotenoids in saffron samples from Azerbaijan and Iran is higher in comparison to samples from India and Spain (Caballero-Ortega et al. 2004).Each region producing saffron claims that they have a product with unique attributes.Variation in saffron product characters can be due to environmental effects, post-harvest processing and any genetic variation.The Kashmiri saffron is not only famous in the country but also around the world being preferred everywhere and is said to be most expensive in the world selling somewhere between Rs. 2.5-3.0 lakh/Kg thus directly or indirectly providing livelihood to thousands of people.However, being a threatened crop, saffron needs a fresh lease of life in Kashmir.Sincere efforts are to be made to save this wonderful legacy for our future generations.