Salt Affected Soils and their Management

Presence of salts in soil at high concentrations adversely affects soil health and the crop growth and production. Reclamation and management to maintain long term productivity of salt affected soils is very important. There are various methods for reclaimation of salt affected soils, but effective management can be achieved with integration of all these different techniques in..
Salt affected soils and their management
Authors: V.K. Sharma, Mandira Barman*, Khusboo Rani and Kapil A. Chobhe
Division of Soil Science and Agricultural Chemistry, ICAR-Indian Agricultural Research Institute, New Delhi-110 012
*Corresponding author E-mail: mandira.ssaciari@gmail.com


Some amounts of salts are always present in soils. When the concentrations of these salts are low, they are not harmful to crops but presence of salts at high concentrations adversely affects soil health and the crop growth and production. Salt affected soils can be defined as soils with high concentrations of dissolved mineral salts in their profiles such that these dissolved salts adversely affect crop production (Wong et al. 2010). The salts are primarily composed of carbonates, chlorides, sulfates, and bicarbonates of calcium (Ca2+), magnesium (Mg2+), and sodium (Na+) (Qadir et al. 2000). Salt-affected soils occur in all continents and under almost all climatic conditions. Their distribution, however, is relatively more extensive in the arid and semi-arid regions compared to the humid regions. The nature and properties of these soils are also diverse such that they require specific approaches for their reclamation and management to maintain their long term productivity. For any long-term solutions, it is, therefore, necessary to understand the mode of origin of salt-affected soils and to classify them, keeping in view the physico-chemical characteristics, processes leading to their formation and the likely approaches for their reclamation and successful management.

Indian scenario
About 6.74 mha land in India is under the adverse impact of salinity and sodicity. Large extent of states like Uttar Pradesh, Gujarat, Andhra Pradesh etc. are affected (Figure 1) (Wicke et al., 2012). 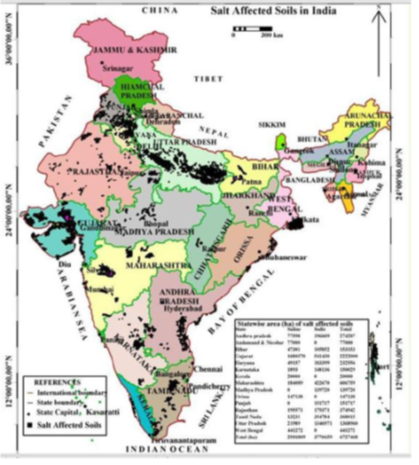 Causes of development of salt affected soils
Salinity is of two types, primary and secondary depending upon the source of salt. The former occurs due to natural deposits of salt whereas the later is caused mainly due to anthropogenic factors. Primary salinisation occurs due to weathering of rocks, capillary rise from shallow groundwater, intrusion of sea water along the coast, salt laden sand blown by sea winds etc. Reasons of secondary salinisation are: poor quality irrigation water, industrial effluents, overuse of basic fertilizers, flooding with salt rich water and improper planning of developmental works.

i) Saline soils - Soils containing sufficient neutral soluble salts to adversely affect the growth of most crop plants. The soluble salts are chiefly sodium chloride and sodium sulphate. But saline soils also contain appreciable quantities of chlorides and sulphates of calcium and magnesium.

These two main groups of salt-affected soils differ not only in their chemical characteristics but also in their geographical and geochemical distribution, as well as in their physical and biological properties. The two categories also require different approaches for their reclamation and agricultural utilization. In nature the various sodium salts do not occur absolutely separately, but in most cases either the neutral salts or the ones capable of alkaline hydrolysis exercise a dominant role on the soil-forming processes and therefore in determining soil properties. According to USDA system of classification, there are three categories of salt affected soils i) saline ii) sodic and iii) saline sodic.

The effects of salinity and sodicity on different soil properties

Physical properties
Elevated levels of exchangeable Na+ cause structural deterioration of the affected soils resulting in low pore volume and poor soil-water and soil-air relations in salt affected soils. This affects soil hydraulic properties such as hydraulic conductivity and infiltration rate due to aggregate breakdown. Slaking, clay swelling, and dispersion are the main mechanisms involved in aggregate breakdown in sodic soils. Loss of structure and reduction in transmitting capacity for air and water in soils with high sodium concentration will therefore result in the formation of massive structure, poorly aerated and waterlogged soils. Such conditions are unfavourable for the establishment and the growth of the plants.

Soils high in salinity and sodicity have high values of ECe, ESP, SAR, and pH . Salt-affected soils generally suffer from deficiencies of nitrogen (N), phosphorus (P), and potassium (K). However, their high pH also adversely affects the availability of micronutrients such as Fe, Al, Zn, Mn, and Cu. Decline in vegetation growth due to salt toxicity, high osmotic suction, and degraded soil structure of salt-affected soils results in lower C inputs in these soils and further deterioration of their physical and chemical properties. Surface crusting and sealing, also cause considerable erosive losses of organic matter so organic matter is low in these soils due to both low input and high losses. With increasing salinity, N mineralization decreased and gaseous NH3 losses increased. High ion concentration, primarily Na+ and Cl−, reduces the ability of plants to take up water, which in turn affects the plant cells and growth.

Microbial growth and activity are adversely impacted by increasing soil salinity, as high salt concentrations in soils causes' osmotic stress and dehydration of microbial cells. In addition to salt stress, Na+ toxicity; nutritional deficiency such as Ca2+ deficiency; toxic levels of other ions such as carbonate, bicarbonate, and chloride; and loss of organic matter because of structural degradation all significantly contribute to decreasing microbial populations and activities in salt-affected soils. Activity of soil enzymes with a role in C, N, P, and S cycles decreased with increasing salinity.

Reclamation is the process of restoring disturbed land into a cultivable land and management is the sum total of all processes to protect soi and improve its performances. Different approaches for reclamation of salt affected soils are as follows:

• Scraping is the temporary method of soil reclamation in which salt layer on soil surface is scraped off by mechanical means and the lower soil layer with less salt content is used for cultivation. Since, with lowering of ground level with respect to water table, salt accumulates again, this method has resulted in limited success and it intensifies the problem. This method is seldom used because of the high cost involvement.

• Flushing is another method of desalinization. In this method accumulated salts on the surface is washed away by water. This method had little applicability as it has high efficiencies at the beginning and gradually the efficiency decreases as saline concentration begins to fall.

• Leaching is by far the most effective procedure for removing salts from the root zone of soils. Leaching is most often accomplished by ponding fresh water on the soil surface and allowing it to infiltrate.

• Drainage is of two types: surface drainage and sub surface drainage. In surface drainage, ditches are provided so that excess water will run off before it enters the soil. However the water intake rates of soils should be kept as high as possible so that water which could be stored will not be drained off. Field ditches empty into collecting ditches built to follow a natural water course. A natural grade or fall is needed to carry the water away from the area to be drained. If the natural subsurface drainage is insufficient to carry the excess water and dissolved salts away from an area without the groundwater table rising to a point where root aeration is affected adversely and the groundwater contributes appreciably to soil salinization, it may be necessary to install an artificial drainage system for the control of the groundwater table at a specified safe depth. The principal types of drainage systems may consist of horizontal relief drains such as open ditches, buried tiles or perforated pipes or in some cases pumped drainage wells.

• Use of soluble salts of calcium which include gypsum (CaSO4.2H2O), CaCl2, phosphogypsum etc.

• Use of acid or acid formers like, sulfur, sulfuric acid, sulfates of Fe and Al, pyrites etc. 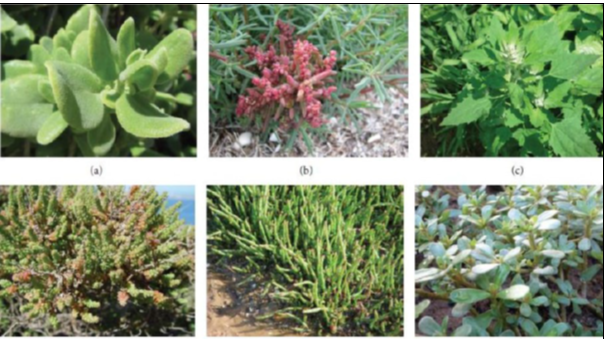 There are various methods for reclaimation of salt affected soils, but effective management can be achieved with integration of all these different techniques in a sustainable manner. Among the chemical amendments, gypsum and sulphur application is very efficient. Green manure and crop residues are effective in reducing the gypsum requirement. The use of halophytes is a potential method of using salt affected soils as an opportunity to grow crops.