Secondary metabolites play significant role in plant defence against insect and,hervivorous. The apparent lack of primary function in the plant, combined with the observation that many secondary metabolites have specific negative impacts on other organisms such as herbivores and pathogens , leads to the hypothesis that they have evolved because of their protective value Product..
Secondary Metabolites and Plant Defense
Authors: Sunita Chaudhary*, Jyoti Chauhan , Seema and Rekha Sodani

Abstract: Wounded plants accumulate numerous plant defensive compounds. Now-a-days, it is well accepted that plant secondary metabolites viz phenolic compound Terpenes and Alkaloids are involved in this plant defense system. The process of inducing resistance using elicitors is environmental friendly and is advantageous over the chemical based pesticides. It is like stimulation of the plant’s own defence system rather than on suppression of pathogens. The resistance developed in this way has long lasting effect. Secondary metabolites often play an important role in plant defense against herbivory and other interspecies defenses. This could be an alternative solution to reduce the use of pesticides and protect plant from herbivorous and act as anti feedant.

Many secondary metabolites found in plants have a role in defense against herbivores, pests and pathogens. In this article, a few examples are described and discussed, and some of the problems in determining the precise role(s) of such metabolites highlighted. The role of secondary metabolites in defense may involve deterrence andanti-feedant activity, toxicity or acting as precursors to physical defense systems. Many specialist herbivores and pathogens do not merely circumvent the deterrent or toxic effects of secondary metabolites but actually utilize these compounds as either host recognition cues or nutrients (or both). Their biochemistry is compared and contrasted. An enormous variety of secondary metabolites are derived from shikimic acid or aromatic amino acids, many of which have important roles in defense mechanisms. Several classes of secondary products are ‘induced’ by infection, wounding or herbivory, and examples of these are given. Genetic variation in the speed and extent of such induction may account, at least in part, for the difference between resistant and susceptible varieties. Both salicylates and jasmonates have been implicated as signals in such responses and in many other physiological processes, though their precise roles and interactions in signaling and development are not fully understood. The classic view that secondary constituents are waste products in plants have been replaced by one in which their value is assumed to be as a protection against herbivorous and microbial attack. Large increases in the amount of secondary metabolites can occur in stressed plants and those subject to mechanical damage or that caused by insects. In order to establish a protective role for a given metabolite, it is necessary to monitor concentrations over the life cycle of the plant, to survey plant populations, to determine specific localization within tissues and to carry out bioassays against insects and microorganisms. Synergy between toxins of the same class or of different classes is likely. Changes in secondary chemistry may also occur during ontogeny, and protection may be restricted to the most vulnerable plant organs. Finally, toxins may vary indiscriminately in their distribution within the plant or within populations and still provide protection.

1. Constitutive defense response : These defense mechanism is always present. they are often species specific and exit in as stored compounds to reduce toxicity or precursors of active compound, that can easily activate upon damage.

2. Induced defense response: Initiated only after damage occurs. It require smaller investment of plant resources but must activate quickly to be effective. 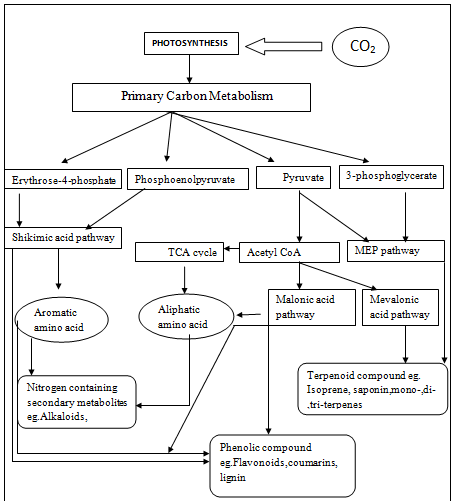 Conclusion: Secondary metabolites play significant role in plant defense against insect and, herbivorous. The apparent lack of primary function in the plant, combined with the observation that many secondary metabolites have specific negative impacts on other organisms such as herbivores and pathogens, leads to the hypothesis that they have evolved because of their protective value Production increases when a plant is attacked by herbivores or pathogens.

Darvill AG, Albersheim P. 1984. Phytoalexins and their elicitors: a defence against microbial infection in plants. Annual Review of Plant Physiology 35 : 243–276.

About Author / Additional Info:
I am persuing ph.D degree from BHU varansi with Srf fellowship