In the last 40 years, the commercial seed industry has transformed dramatically. It has shifted from a competitive sector of agribusiness, composed primarily of small, family-owned firms, to an industry dominated by a small number of transnational pharmaceutical/chemical corporations. These corporations entered the industry by acquiring numerous smaller seed companies, and merging with large competitors. 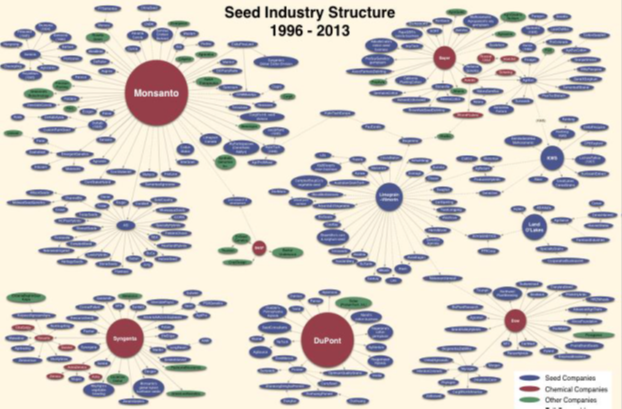 1. The first wave started in the early 1930s when new commercial seed firms were established and continued to adapt public research on hybridization and other innovations, leading to growth in maize and other seed sectors.

2. The second wave started in the 1970s fostered by the introduction of various intellectual property (IP) rights, such as plant breeders rights (PBRs) and patents, which promised to increase returns from investments in plant breeding research and development (R&D). The introduction of stronger IP rights set off a wave of mergers and acquisitions (M&As) by R&D-minded pharmaceutical, petrochemical and agrochemical companies from the US and Europe.

3. The third wave started in the 1980s when, inspired by the potential of biotechnology, a handful of agrochemical multinationals from the US and Europe invested substantially in genomics, genetic modification (GM) and other new technologies. For the commercial introduction of a new GM seed, biotechnology know-how, access to seed germplasm and IP had to be coordinated. This led to a strong wave of strategic M&A activities by these few multinationals which vertically integrated germplasm and GM/biotech assets.

Government policies: Governments around the world have generally pursued growth in agricultural productivity through various policies. On the one hand, science and technology (S&T) policies and Intellectual Property laws have sought to create incentives for innovation. This positively influenced the seed and biotech firms to invest, merge and expand. On the other hand, biosafety/GMO regulations were implemented to manage food and environmental safety. The relatively high regulatory compliance costs for GMO approvals, however, have probably discouraged small and medium sized seed and biotech firms and public sector institutions to bring GM crops to the market. Finally competition and antitrust laws were implemented to manage market risks. Both in the US and in Europe biotech firms were required to divest certain germplasm assets before certain mergers and acquisitions could be approved. 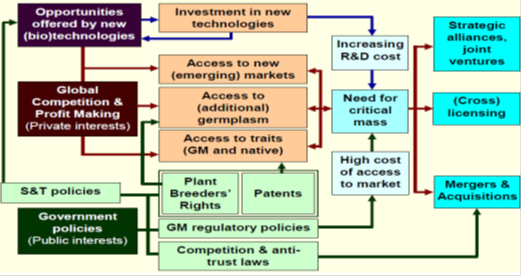 Business strategies: Scientific breakthroughs, especially in plant biotechnology, and government policies, in particular on IP rights, created profit opportunities for innovations in plant breeding. The literature review revealed the use of a variety of business strategies in response to these opportunities: Investments in in-house R&D in plant science and breeding, R&D collaboration with private and public partners, M&As and pursuit of IP rights including through (cross) licensing of IP. The increasing investment in R&D for biotech seed innovations as well as large GMO regulatory compliance and legal expenditures incentivized seed companies to grow in size and expand in new markets in order to achieve critical mass.

This consolidation is associated with a number of impacts that constrain the opportunities for renewable agriculture. Some of these include declining rates of saving and replanting seeds, as firms successfully convince a growing percentage of farmers to purchase their products year after year, a shift in both public and private research toward the most profitable proprietary crops and varieties, but away from the improvement of varieties that farmers can easily replant and a reduction in seed diversity, as remaining firms eliminate less profitable lines from newly acquired subsidiaries.

One change that would slow consolidation would be greater antitrust enforcement. The USDA recently announced its intention to hold joint hearings/public workshops in 2010 to consider antitrust issues in agriculture, first examining the seed industry, followed by beef and dairy. It remains to be seen if actual enforcement will be more stringent than in recent decades, however. Another possibility would be to erect much stronger obstacles to accumulation by ending the practice of granting patents on living organisms. A third possibility would be an increase in efforts by farmers and non-farmer allies to resist agricultural treadmills and to create alternatives to oligopoly seed production. Examples include: choosing to farm with practices that attempt to minimize external inputs (e.g., agro-ecological, Biodynamic, organic) and increasing consumer demand for these products.

Independent seed company decisions to cease the distribution of Monsantoâ€˜s proprietary seed varieties and grassroots efforts to conserve seed biodiversity. All of these efforts would benefit from greater public awareness of recent trends in the global seed industry, and their importance. Communicating this information to broader audiences through visualization may therefore make an important contribution to their success.

Schenkelaars, P., Huib, de V. and Nicholas, K. (2011). Drivers of Consolidation in the Seed Industry and its Consequences for Innovation.


About Author / Additional Info:
I am a PhD student of Seed Science and Technology at IARI New Delhi