The study was undertaken to examine the trends in sheep production system in Rajasthan. Although, sheep population increased impressively in Rajasthan since independence, but there was a decreasing trend in the recent past in the state and in almost all the districts. Wool production showed a declining trend and sheep meat production showed moderate growth in the state. The dec..
Temporal and Spatial Pattern in Sheep Production System in Rajasthan
Authors: Kumar Rakesh1, D.R. Singh2, Prawin Arya3, Anil kumar4
1Ph. D. Scholar, IARI, New Delhi, 2Senior Scientist, Division of Agricultural Economics, IARI, New Delhi, 3Senior Scientist, IASRI, New Delhi and 4Principal Scientist, IASRI, New Delhi

Rajasthan is the largest state in the country and large part of the state is arid or semi-arid and fall under Thar Desert. The climatic conditions are adverse with scarcity of water for irrigation and erratic rains with very low average annual rainfall. These conditions leave a little scope for crop production and enhance the importance of animal husbandry over the crop production especially during recurrent droughts. As per Livestock Census, 2012, the state had a good number of total livestock population (577 lacs) and of the total around 16 per cent were sheep. More than 80 per cent rural families keep livestock in the state. The contribution of animal husbandry sector to the state gross domestic product has been estimated to be around 9 per cent (GoR, 2010). About 35 per cent of the income to small and marginal farmers comes from dairy and animal husbandry in the state. In arid areas the contribution is as high as 50 per cent. Rajasthan ranked third in sheep population and accounted nearly 14 per cent of the total sheep in the country and yielded 35 per cent of the total wool production. Sheep are raised profitably with good employment opportunities in the state with low investment mainly by the economically weaker and socially backward sections (Singh et al., 2006; Suresh, 2008; Kumar et al., 2013). However, the productivity of sheep in India is low as compared to other countries. In addition, the quality of wool produced by Indian sheep is also inferior. The average wool production in India is 0.62 kg per sheep per year and in Rajasthan, it is about 1.12 kg per sheep per year, whereas, it is 4 to 5 kg in Australia and 2.5 kg globally. The consumption of meat has been projected to rise to 8-9 million tonnes by 2020 in which contribution of mutton would be substantial (Birthal and Taneja, 2006). Therefore, the present study was undertaken to examine the temporal and spatial dynamics of sheep production system in Rajasthan.

Sheep are traditionally raised under either stationary or migratory conditions in the state. The migration may be temporary (of short duration to neighboring location) or permanent where flocks spend most of the time on migration usually to long distances. The livestock census-wise data on total sheep and livestock population in Rajasthan state were collected from published sources. The district-wise statistics on sheep population and wool and meat production were also collected. Further, the information on sheep migration in the state were also collected from the publications and website of Department of Animal Husbandry, Government of Rajasthan. To study the temporal and spatial pattern dynamics of sheep population in Rajasthan, the district-wise compound growth rates were calculated over the different time periods related to livestock censuses. For the better interpretation of the district-wise growth in sheep population, the districts were classified into high and low sheep populated districts. The districts, in which sheep density was more (less) than 25 animals per km and share of sheep in total livestock was more (less) than 10 per cent, were considered high (low) sheep populated districts.

Temporal and spatial dynamics of sheep population in Rajasthan 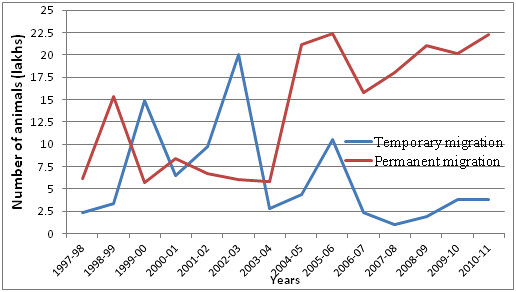 Lack of pasture land, fodder and drinking water and poor market availability at native place forced sheep herders to migrate temporarily or permanently to other locations. However, there was a drastic decline in the growth in temporary migration from 42 per cent during 1997-98 to 2002-03 to negative (-5 per cent) during 2003-04 to 2010-11 (Table 4). However, during the same periods, the reverse was the case of permanent migration. Overall, the growth in total migration declined from 11 per cent during the time period 1997-98 to 2001-02 to 8 per cent during the period 2003-04 to 2010-11. A reflection of the migratory sheep population vis-a-vis the pattern of drought in the state indicated that during drought years, the total sheep migration as well as the proportion of temporary migration recorded sudden increase as observed for the year 2002-03, which was classified as a severe drought year in the state. The major factor responsible for the decline in the temporary migration was the recurrent droughts in the state which forced the flock owners to shift towards permanent migration and to sell large number of animal for livelihood security. These drought conditions also led to increase in the permanent migration in the recent past. However, the variability in the permanent and temporary migration declined during the recent years in comparison to previous period.

Table 4. Growth and instability in sheep migration in Rajasthan

Trends in wool production in Rajasthan

A district wise and temporal analysis showed that the average wool production was highest in Barmer and Bikaner districts in TE 2005-06 and 2009-10, respectively (Table 6). The contribution of Ajmer district was around 3.40 lacs kg in TE 2005-06 and increased to 5.62 lacs kg in TE 2009-10 with the highest growth of around 9 per cent in the state. Whereas in most of the high sheep populated districts, it was found to be decelerating. The highest decline (11 per cent) was observed in Churu district. On the other hand, in low sheep populated districts, Udaipur district showed impressive growth of around 17 per cent in wool production. The overall decline in the growth of wool (-3 per cent) was found in Rajasthan. This shows how the decline in the sheep population led to a large decline in the wool production.

Although, sheep population increased impressively in Rajasthan since independence, there was a decreasing trend in the recent past. There was also a decline in almost all the districts in recent past. The decline in the sheep and wool production was related to the drought conditions in the state. Sheep migration did not show any definite trend and was highly unstable in the state. However, there was a declining trend in the temporary migration and increasing trend in permanent migration. Increase in permanent migration in recent time may be related to increased variability in the climatic factors. Although, the state ranked first in the wool production in the country, the average wool production is declining. The district-wise wool production also showed decreasing trend in most of the high sheep populated districts. The fall in wool production was partly due to decrease in sheep population on account of more sale of animal for livelihood security during drought years. Secondly, the farmers are not interested for better management of wool production on account of meagre contribution of wool in total income realization. There is huge demand of sheep meat in international and domestic markets, however the growth in sheep meat production was found to be moderate in the state. Therefore, to sustain the livelihood security to the poor sections of the society, efforts should be undertaken to stabilise sheep production system in the state. Subsidised fodder and feed may be provided during severe drought conditions. Effective and subsidised credit through Kisan Credit Card can be evolved for sheep owners like crop loan to arrest the distress sale of animals. The market imperfection and poor infrastructure are the major impediments in the realization of full economic potential of this production system. Therefore, urgent attention is needed for development of processing facilities and reform the small ruminant markets in the state.